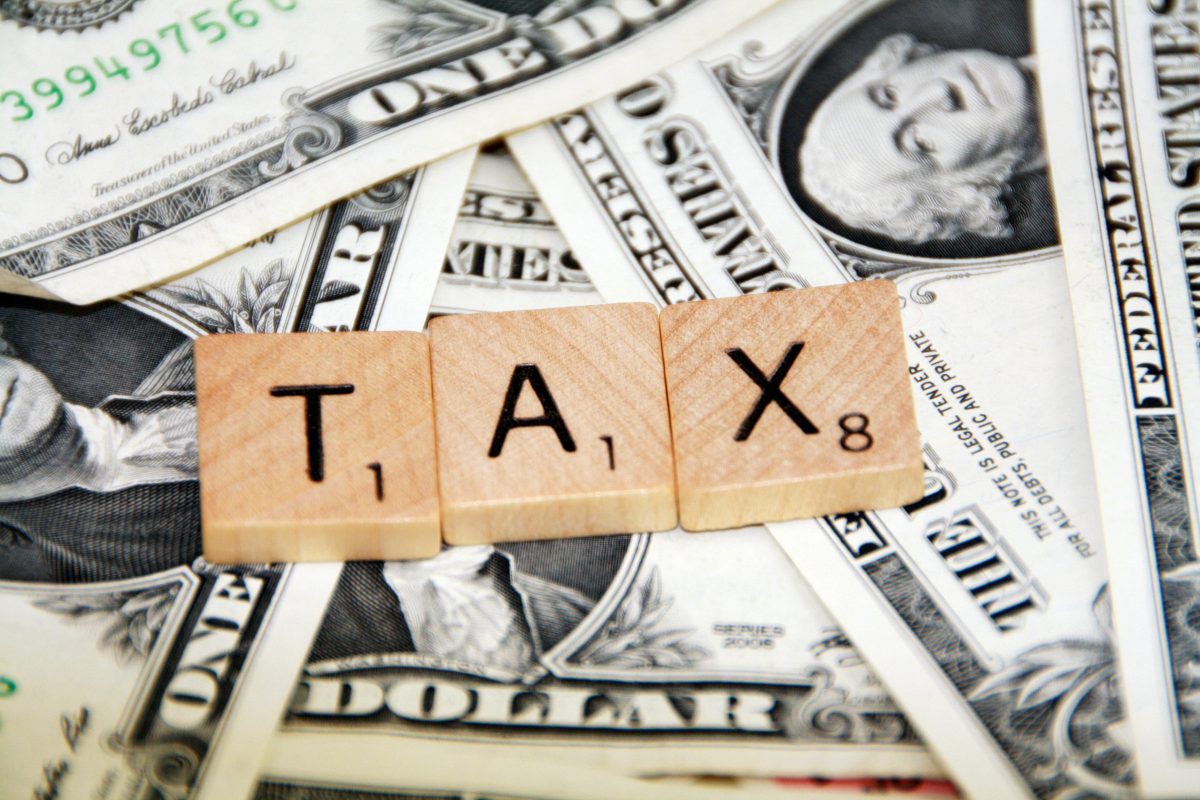 On Friday and Saturday two articles appeared here in the Vanguard that covered the work-in process due diligence research that I was in the midst of undertaking regarding DJUSD’s Community Facilities District No. 1 (CFD #1) Special Tax, which was originally passed by the voters in Measure A on November 7, 1989.  All Davis parcel owners (other than opt-out seniors) pay the CFD #1 Special Tax annually as part of their property tax bills. Friday’s initial article by me can be read HERE, and Saturday’s response article by David can be read HERE.

As part of the Friday article comments, Don Shor posted the following observation and question. Based on his comment, it appeared that Don accepted on face value the words that he quoted and bolded.  I read those words differently than Don did, and my response to him also appears below.  One additional piece of background is that the intent of my initial communication to DJUSD was to bring some additional transparency and clarity to the questions raised by those very same words that Don quoted.  So far the trajectory of the events has been consistent with that intent. 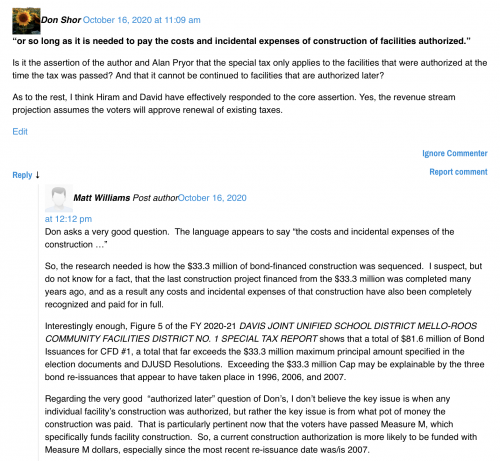 On Friday evening I received an e-mail with an attached letter from DJUSD’s Associate Superintendent of Business Services, Amari Watkins, which was copied to DJUSD Superintendent John Bowes and Davis City Manager Mike Webb.  Amari also provided the letter to the Vanguard, which was the basis for the Saturday response article by David Greenwald.

In the same spirit of transparency that I am asking DJUSD for, the following is a copy that letter from Amari Watkins. Having a copy available to all Vanguard readers makes understanding the references in my subsequent e-mail to Amari easier to follow. 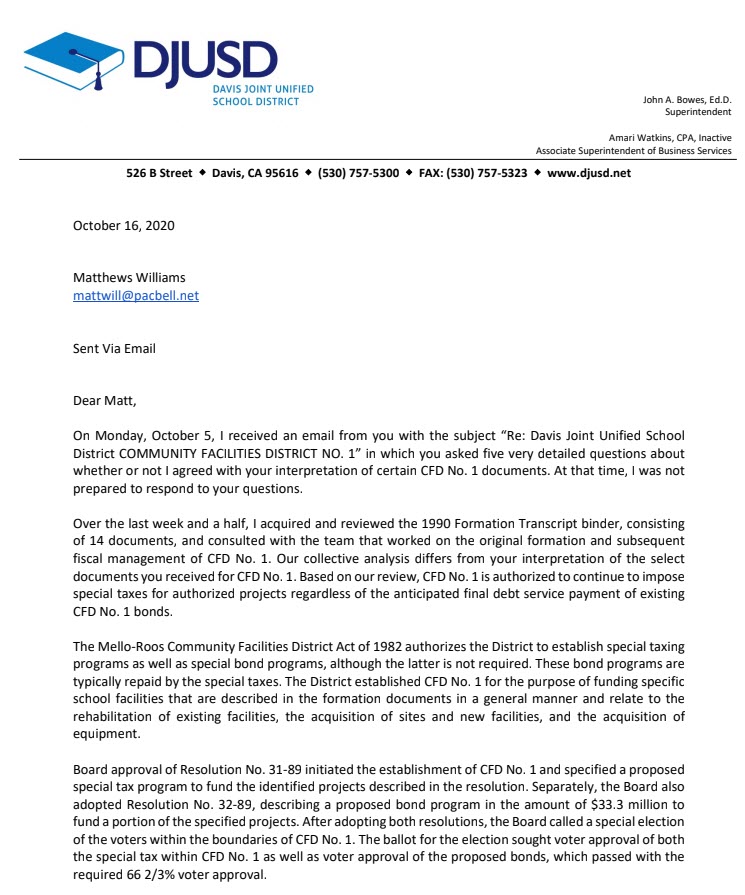 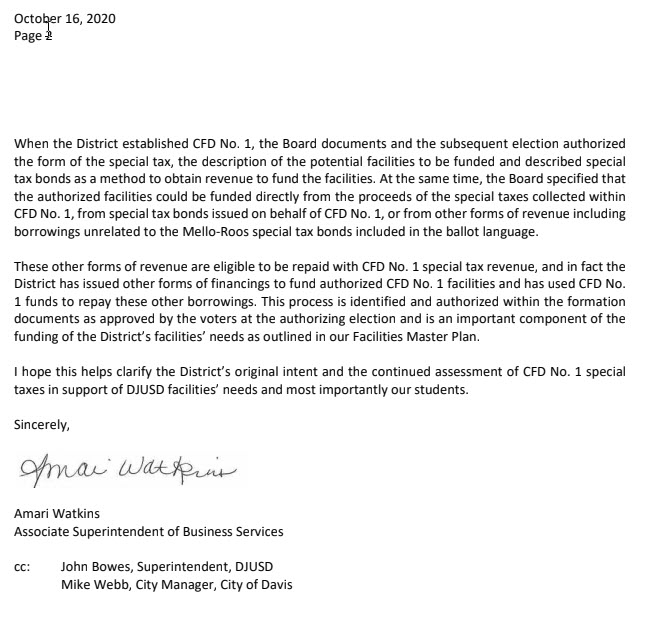 I want to thank Amari Watkins for her e-mail and letter.  Her letter is a helpful step forward toward a greater level of transparency regarding both the past and the future of DJUSD’s CFD #1.

As shown in the copy of the letter above, Amari concludes with the sentence, “I hope this helps clarify the District’s original intent and the continued assessment of CFD No. 1 special taxes in support of DJUSD facilities’ needs and most importantly our students.”

I agree that her letter does indeed help clarify some of the questions I raised regarding both the District’s original intent and the continued assessment of CFD No. 1 special taxes.  However, I believe her letter raises as many questions as it answers. As a result, I sent her a response e-mail yesterday (Monday), the full text of which is as follows: 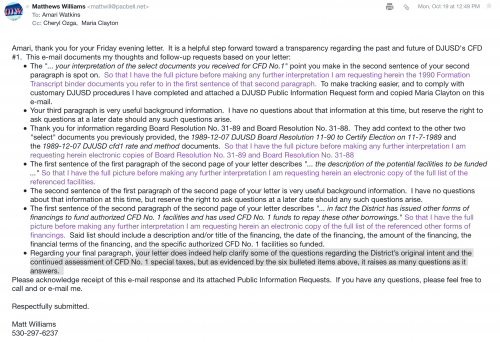 It is worth noting that I wasn’t the only person for whom the contract language, as well as the response from Amari Watkins raised questions.  A Facebook poster named John Hess suggested “Ask to see their work.”  Asking to see DJUSD’s work is another purpose of my follow-up letter today. 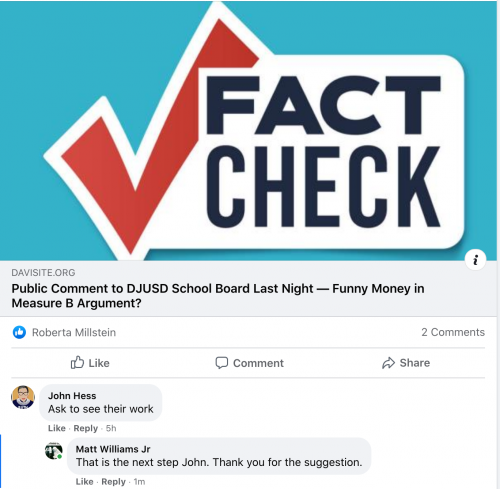 In putting this article together, as well as the original article on Friday, my goal was, and continues to be, to increase the transparency of the data that taxpayers and voters are discussing in the coming days and weeks.  In my opinion, this data does affect their lives. For the record, I have also shared the data and communications with the Yolo Taxpayers Association.

Time will tell whether my assessment and calculations are right. Depending on the outcome, all DJUSD taxpayers may be looking at an adjustment to their CFD #1 special tax in their favor in the coming months. 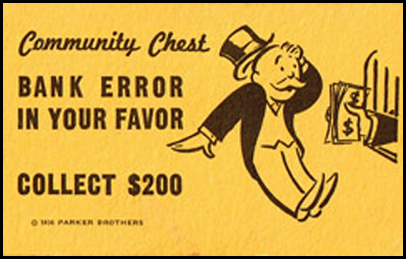