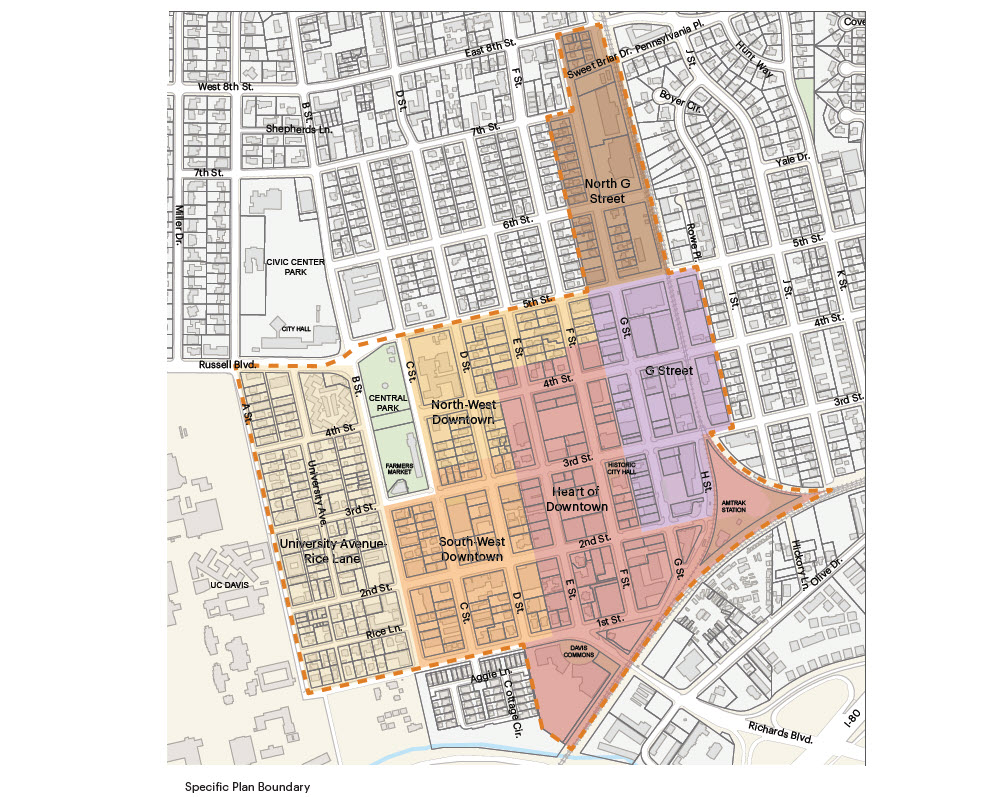 The city’s Downtown Davis Specific Plan and the associated Form-Based Code has progressed to the point of an EIR, with the city issuing a notice of preparation as they develop the EIR for the Downtown Plan.

A scoping meeting is scheduled virtually for Thursday, October 29, at 6 pm where comments will be solicited from the public.

According to the notice, the proposed project encompasses 32 blocks, approximately 132 total acres in the Davis Downtown Core Area—which includes the University Avenue-Rice Lane neighborhood and select parcels in the Old North and Old East neighborhoods.

This is an update of the 1996 Core Area Specific Plan (CASP) which was “adopted as a visioning document for development in the Downtown, guided by a comprehensive set of maps, policies, guidelines,

Staff notes: “While the CASP is comprehensive in nature, it is not a regulatory document and implementing the vision of the CASP has been difficult due to inconsistencies with the Core Area zoning designation. Furthermore, the City recognizes the need to update the CASP to reflect changes in the existing conditions and the community’s vision of the downtown area.”

The current project is intended to implement a new community vision for the Downtown which was developed by the Downtown Plan Advisory Commission (DPAC) over the course of roughly 18 months of work and will project for a vision of future development and reinvestment through 2040.

One of the key upgrades is that the proposed project will allow for the development of 1000 additional residential units as well as 600,000 square feet of nonresidential development in the project area by 2040.

Staff notes: “Because the project area is largely built out, the proposed project assumes development would occur as either infill of vacant lots, or as redevelopment of existing buildings or additional building on underutilized sites.”

They add, “The Downtown Davis Specific Plan is proposed with the intent to provide for increased residential development and additional commercial opportunities while building on the unique character of Downtown Davis by ensuring future growth is compact, sustainable, supportive of a rich economy, and that necessary improvements are made to the transportation network to ensure safe and equitable access by all travel modes.”

In addition to the inclusion of mixed-use residential development, the other innovation is the advent of the form-based code.

Staff describes this as a “mechanism by which the Downtown Davis Specific Plan would be able to assure these goals are met as development occurs.” 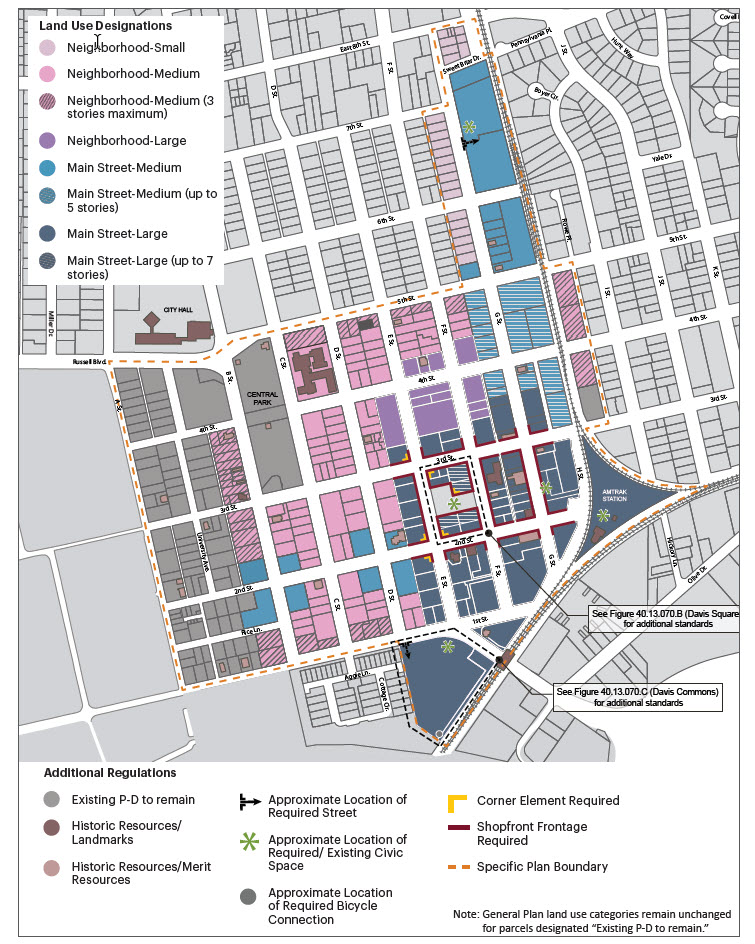 Staff notes that the proposed project includes eight primary land use designations, each with additional regulations.  There are a total of six special areas that are identified by location or size, which include: the Davis Commons, Davis Amtrak Station, E Street Plaza Block, E/F Street Parking Lot, East Transition Lots, and the North End Site—Seventh Street and G Street.

Mobility is a key consideration, with improvements to the downtown circulation plan incorporated into the proposed project.

“These improvements would include preserving a safe and enjoyable pedestrian network, promotion of bicycling and transit, and the concentration of automobile transit on thoroughfare roadways,” staff writes.  “Improvements include streetscape improvements, grade-separated bicycle and pedestrian crossings, signalized intersections, intersection reconfiguration, protected and shared-use cycle tracks, and signal coordination. The proposed project additionally includes preparation for ride-hailing and autonomous vehicles and enhanced parking management.”

Staff believes that “because the proposed project is consistent with the General Plan and the General Plan EIR,” that it qualifies “for the CEQA streamlined environmental review as allowed in Section 15183.”

Thus they believe: “It is the intent of the proposed project to result in streamlined project consideration and approval.”

They write: “The proposed project identifies strategies to protect and preserve the existing historic resources in the project area while encouraging adaptive use and sensitive redevelopment. This would be achieved through designated conservation overlay districts which would protect the traditional neighborhood characteristics, discourage demolition of historic structures, identify historic preservation incentives, and plan for standards for infill construction that are compatible with existing historic structures, including adjacency to resources.”

The next step is the scoping meeting that will take place on Thursday at 6 pm.  The meeting will be held via Zoom and participants can join via electronic devices.  The comment period extends until 5 pm on November 5.  There will then be an EIR issued with a 45-day comment period.