The Question:  Should residents approve annexing agricultural land to develop the Davis Innovation and Sustainability Campus (DISC)?  Annexation of county land for city-related uses has required citizen approval since voters passed the “Citizens Right to Vote on Future Use of Open Space and Agricultural Lands” ordinance in 2000 (as Measure J)

The Situation:  Davis has studied options for an innovation park with the goals of leveraging UC Davis’ international reputation for academic and research advancements in agriculture, biotech, green-tech, and food science research.  As the options were studied, four options initially appeared to be available but these have since been reduced to one (see Appendix for a more detailed history).  The project site is agricultural land that has been productively farmed for many decades.  Moving forward with the project will put an end to farming on the site.

The Proposal:  Ramco Enterprises, Buzz Oates Group and Reynolds & Brown’s proposal, as presented to the City Council in July 2020, is for a 203.5-acre project site, immediately east of the City of Davis city limits, east of Mace Blvd and just north of Second Street/ County Road 32A.  At full build-out, projected by the developer to occur over a 20-year period, DISC will include:

Fiscal Implications: Negotiations between the City and Yolo County regarding each entity’s share of the projected revenue and other items have not yet been finalized and may be modified with time.  Sales revenue, jobs and increased school attendance are areas of economic impact; estimates differ as seen in the pro and con arguments. 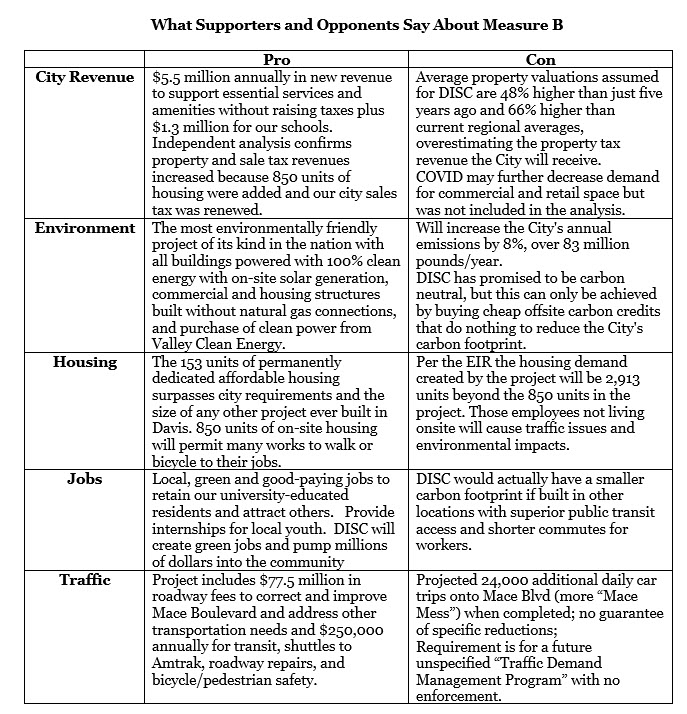 Appendix:  History of Exploration of an Innovation Park Concept for Davis

The City has studied options for an innovation park for over 20 years:

30 thoughts on “Guest Commentary: League’s Impartial Analysis of Measure B”