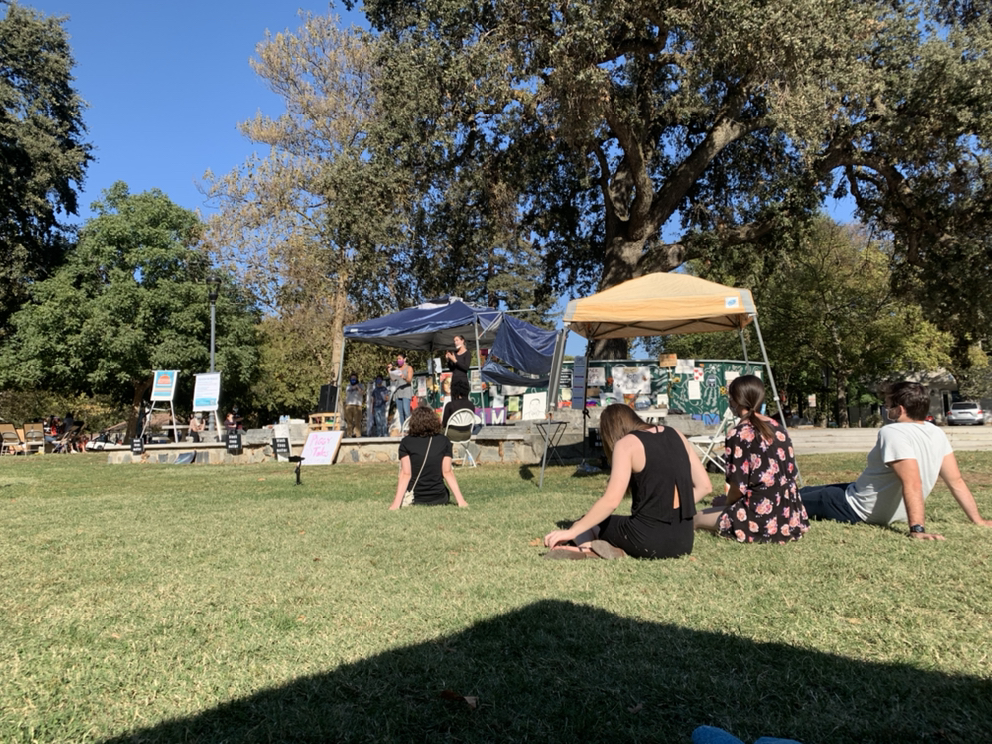 DAVIS — On Saturday Oct. 24, an educational rally for innovative policing and public safety strategies was held in Davis’s Central Park.

Aiming to spread awareness of alternative ways of creating a compassionate system in Davis that will effectively ensure safety to all those in the community, the event featured short speeches from various local voices.

The event was hosted by Yolo People Power (YPP), Multiculturalism Rocks, Women in Leadership Davis, Yolo Committee for Diverse and Inclusive Elections and Indivisible Yolo, who had booths surrounding the event for more information. The event was simultaneously live streamed, recorded and posted on Facebook for those who were unable to attend.

The first speaker of the event, chair of the Police Accountability Commission (PAC) and local Democratic leader Dillan Horton, dove into the issues that people in our community are facing everyday. He stated, “We are in a situation where African American individuals, Latinx folks, Native population, so many different communities of color drive down the streets of this city in fear, not of a traffic collision, but for the fear of possibly being pulled over by law

Horton drew on personal experience, stating with disappointment that “I am the only African American person on the PAC,” telling the crowd that he has been pulled over a number of times by Davis police officers, for, in his opinion, “doing nothing more suspicious than driving down the street of the town I live in.”

Mike Williams, a Native man from the Sacramento Valley, shared his experiences with law enforcement and encouraged those in attendance to look at what is going on around you, and perhaps to you, because “sometimes we don’t even recognize what [systemic racism] is, because it is so vetted in our society.”

The event highlighted the history and deep-rooted problems in policing, with local activist Connor Gorman illuminating that “the fundamental role of modern policing is primarily to maintain the status quo and maintain the current social hierarchies that are present within capitalism and white supremacy.”

Gorman emphasized that “the laws themselves are written by, and for, the ruling class,” and that there needs to be systemic reform because “the laws themselves are part of the problem.” He went on that, this progressive restructuring of our system can “create real safety and real democracy that is meant for the people and not just for the ruling class.”

Analysis of the Davis Police Department data was shared by Morgan Poindexter, another local activist and one of the organizers of  this event. Poindexter analyzed the last five years of the PD’s data and came to two conclusions. First, Davis is not a high violence area, so alternate first responder models for non-violent calls are very applicable.

As for the other conclusion, Poindexter said, “I’m sure everyone is aware, Davis is part of the United States, and is part of California, and therefore as a city in American we have to deal with, constantly, systemic racism.”

Refuting the claim by many that disproportionate police stops and discrimination is not present in Davis, Poindexter gave the audience statistics, stating, “If you are a black person in Davis, the PD is 4.5 times more likely to stop you in a car, walking down the street, than if you were a white person.”

Poindexter acknowledged the opposing argument again and showed that it is not just that some communities commit crimes at a higher rate. In fact, she stated, “If you look at the data, white people, when searched, 29% of them have weapons, drugs, or contraband,” comparing this to “only 22% of Black people who are searched actually have something that is illegal.”

This discrimination does not just appear in police detentions either.

“There are also racial disparities in arrest rates,” Poindexter emphasized. “If you are Black, you are 6.2 times more likely to be arrested for a felony.”

The data she spoke of at the event on Saturday was just what actually gets reported, because “no one is writing down every single time someone disrespects you when they pull you over,” Poindexter said. There is no data that can describe the fear when “[law enforcement] arrive and put their hand on their gun when they’re talking to you, even though you are the one that called them.”

Poindexter, along with Julea Shaw, Caitlin French, Jordan Varney, Aarthi Sekar and Rowan Boswell compiled the five years of data mentioned at the event into a response to the Joint Subcommittee on Public Safety and the Davis PD Staff. The report details that “these data are crucial to the success of the joint sub-commission’s and subsequently Davis City Council’s mission to reform public safety and policing practices in Davis.”

Davis high student and co-president of the Black Student Union, Oluwadara Ogundiwin followed Poindexter and shed light on the school-to-prison pipeline. Ogundiwin described it as “a disturbing national trend, where children are funneled out of public schools and into the juvenile and criminal justice systems.”

This pipeline can be observed in small acts that eventually lead up to a devastating cycle, often seen in schools where students of color notice, as Ogundiwin said, “Someone degrading you and criminalizing you for small offences that your peers are doing as well and not being criminalized for, that will subconsciously reinforce in your mind what is expected of you in society.”

Marlene Mercado and Mark Jerng of the Cops Off Campus coalition came and spoke of the militarized police personnel on UC campuses, and Jerng stated that they are striving for the “abolition of UC police by Fall 2021.”

Mercado spoke of personal experiences. She said, “As a chicana, and being deeply system impacted, which for me means that for generations I have had a family member incarcerated. This isn’t new for us.”

As a PhD student in cultural studies, Mercado shared that “this is our reality, it isn’t something we study because it’s interesting, it is because we want to change these systems.”

Digging into the innovative plans for change in Davis, Aarthi Sekar, a member of the YPP, presented four alternative first responder models that “are designed with the need to effectively respond to mental and behavioral health crises, substance use crises, and the unhoused,” significantly better, and at a lesser financial cost to the city.

The first two models that Sekar presented have more police present than the later two, these are Crisis Intervention Team (CIT) training, of up to 40 hours for officers, and the Co-Responder Model, in which police officers are teamed up with mental health professionals.

The later two are the Emergency Medical Service model, with ambulance based response for non-violent calls and mental health crises, and the Mobile Crisis Team model, which is a team response of a nurse and a mental health counselor.

The Mobile Crisis Team model is currently implemented in Eugene, Oregon and has saved the city “about $8.5 million annually, by just redirecting 17 percent of the calls that would normally be responded to by the police.”

A member of Indivisible Yolo, Emily Hill, brought attention to the local government bodies that dictate money allocation in Davis, stating, “Your city council is the body that decides how much money goes to the police department and how much money is invested in real public safety.”

Hill also urged the audience to pay close attention to the actions of our local officials, pointing out that “our District Attorney chose to prosecute victims of police violence, rather than the perpetrators,” and informed that “[the District Attorney] will be up for election in two years, we will need to get that changed.”

The event encouraged the community to take action, both local and on a larger scale. Tawnee Stair Sweeny, a member of Yolo Grassroots Collective emphasized that change does not derive from “who sits in the White House, not at a particular election at a particular year, but what the people are demanding and voting with by putting their feet in the street.”

Mayor Gloria Partida attended the event as well, again urging the public that “nothing happens in a vacuum,” and that “everything we have been talking about here is all interconnected.”