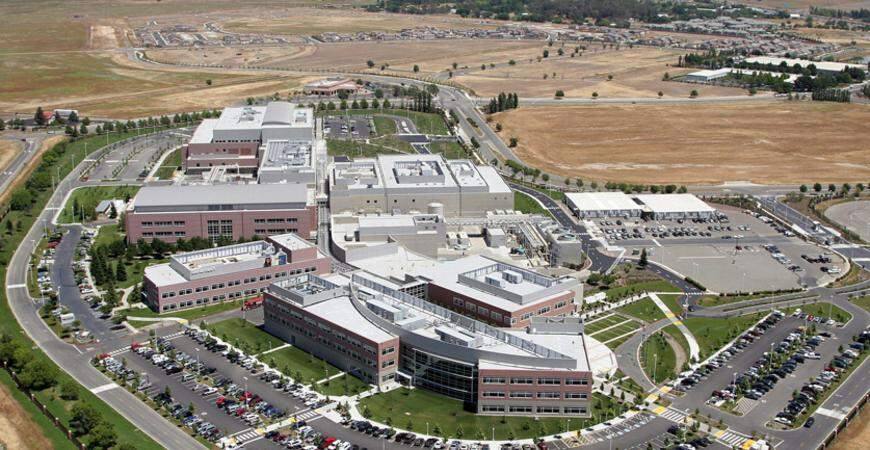 The city also announced the creation of the California Biomanufacturing Center Inc., a nonprofit “intended to accelerate the growth of the sector in Vacaville by working with industry and academic partners.”

This would be larger than DISC—$2 billion in industrial development, 3.5 million in commercial real estate, 10,000 jobs, and payroll of more than $1 billion a year.

“Vacaville has the land, infrastructure, and workforce that the biotechnology industry needs to grow, as well as a long-standing commitment to make doing so a streamlined and efficient process,” Mayor Ron Rowlett said. “With the California Biomanufacturing Center, we are building on our proven success with the industry to secure Vacaville’s continued leadership as a biomanufacturing center going forward.”

Here we have Vacaville—50 miles northeast of San Francisco, between UC Berkeley and UC Davis.  In 1994, Genentech acquired land for its biologics manufacturing facility. According to their press release, the facility is said to be among the largest biotech drug manufacturing complexes in the world.

“The United States must not only rebuild its once robust manufacturing sector but do so with an eye toward the types of advanced manufacturing that will define the future,” Garamendi said in the announcement. “The biomanufacturing strength of Vacaville represents an important opportunity for us to grow the types of high value jobs with career wages that are essential to our country’s

future success while at the same time strengthening our nation’s strategic competitiveness and security.”

There is Senator Bill Dodd.

“Growing biomanufacturing will help build a sustainable economy for the region and the state,” Dodd said. “This will create good paying jobs in an environmentally friendly way and help us secure a prosperous future.”

What does this mean for Davis?

Investors are putting up $2 billion—private-public partnerships, non-profit and for-profit collaborations—and saying that this view is wrong.  I have argued that even if office space demand drops during and even post-COVID, we still need space for R&D, wet labs, bio tech and ag tech space, flex space, and the like.

Second, the rest of the region is not going to wait for Davis.  We now see major investment in all of the cities—Sacramento, West Sacramento, Woodland, and now Vacaville.  Davis in nine days can either open its door or shut it.

Third, as a commenter noted yesterday, the environmental argument is silly.  People are going to commute to these jobs, the only question is whether those jobs are in Davis generating jobs and revenue for our community, or whether they are located in West Sacramento, Woodland, or Vacaville.  The carbon footprint is going to be the carbon footprint.

Is this good or bad for Davis?  I think there is demand to support all of it.  But what this shows is that if Davis votes down DISC in 9 days, the region is moving on without Davis.  The next Genentech will not be located in or near Davis and will not help Davis generate the revenue.

There have been a lot of faulty arguments posed against DISC in the last few weeks and since the project was put on the ballot.  The worst, however, is the notion that somehow there is a lack of demand for these type of projects.

People with money, investors, actually have been saying the exact opposite.  They argue that the future of our region are things like biotech and agtech—things that will always need physical space—and R&D that can develop the technology to deliver biomedical solutions to our crises, as well as high tech solutions to climate change.

The only question is whether those companies, many of which will spin off from UC Davis like Genentech, will locate in Davis or down the road in Vacaville or up the road in Woodland.

The difference between Davis and these communities is that not only does Davis host the world class university, but Davis has the land use provisions to make it difficult to develop these projects.

Vacaville’s mayor said: “Vacaville is the envy of many communities that have dreams of becoming a center for biomanufacturing, but lack the talent, commitment, and space to do so.  The center will not only work with industry to address manufacturing challenges but ensure that Vacaville remains a place for biomanufacturing to flourish.”

Davis could potentially make a similar statement next week.  Or it could take itself out of the game at a critical time.  There is not likely to be a second chance.

46 thoughts on “Monday Morning Thoughts: Vacaville Goes for It – $2B Biomanufacturing Center, 10K Jobs – What Does This Mean for Davis?”