A sponsored ad on Facebook the last few weeks turned some heads.  “Results over rhetoric, action over attacks, people over politics,” the ad read.  “Re-elect Jim Provenza.”  The photo is that of Jim Provenza speaking.

The group is Safe Neighborhoods Coalition.  It sounds innocuous but if you trace it down, you find out its a PAC connect to Yolo County Deputy DA Matt DeMoura.

The race between Jim Provenza, a three-term incumbent, and Linda Deos seems fairly low key.  Linda Deos has attempted to run on a justice reform platform, touting her support of and by Dean Johansson who ran a tough 2018 race against incumbent DA Jeff Reisig.  She has also pushed on the issue of bail reform among other things. 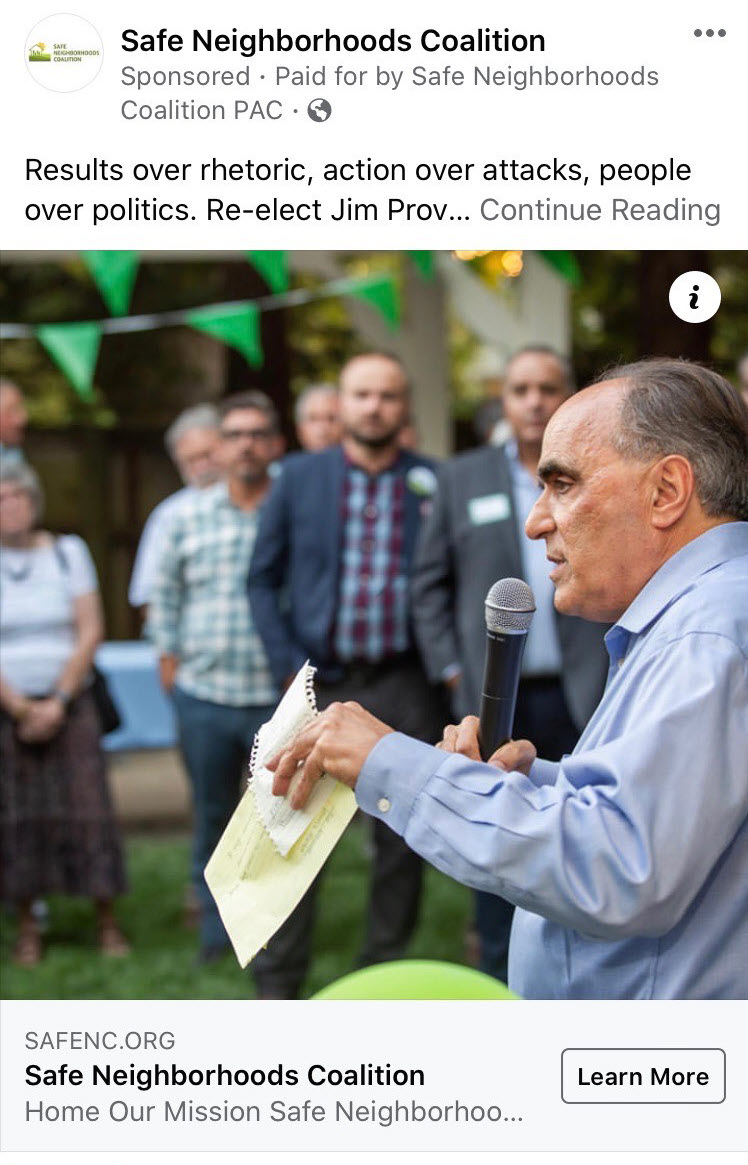 On the other hand, Jim Provenza, who supported Jeff Reisig in 2018 and was supported by the DA, has largely run on his record of 12 years on the board.

While the issue of the DA has surfaced at times, it does not appear to be the defining issue.  But of more interest to me has been the role of Matt DeMoura overall.

If one glances at the Safe Neighborhoods Coalition Facebook you see a very conservative—traditional law and order tone—tough on crime, critical of reform efforts.

As we have noted in previous installments, in February they posted an ad with the caption:  “Dr. Drew Pinsky has been treating addiction and mental illness for years. Listen to his view… Many local leaders endorsed Prop 47. Did yours? What are they doing to fix it? #Prop47.’

It links to a FoxLA article entitled: “Prop 47 is murder.”

In January the group hosted an event: “With increasing concerns of crime, homelessness, and other issues, a growing coalition of local people are going to start doing something positive to affect a change in the community.”

On the group’s Facebook page, they say public safety is their top goals.

They claim to advance their mission in two ways: “By supporting local elected leaders who share our concerns and advocate for approaches that keep us safe,” and,  “By supporting policies, programs and organizations that enhance public safety.”

Last week, they posted an article on an Oakland murder, with the caption, “As violent crime surges to record highs in many major American cities, progressive politicians are deafly silent about it all. Instead, they stand in front of the cameras, reporters and bloggers and talk about disbanding, renaming or defunding the police.” 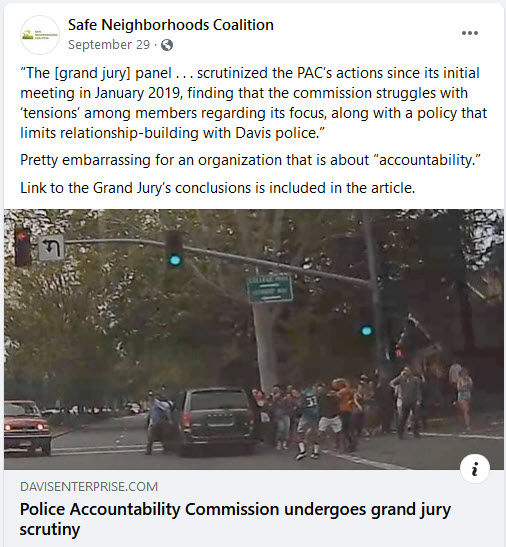 DeMoura also mixes it up with the Davis Police Accountability Commission.

Then he writes: “Pretty embarrassing for an organization that is about “accountability.””

It seems reasonable to ask if Matt DeMoura is acting on his own or on behalf of the Yolo County DA’s Office.

You might recall that on September 11, DeMoura published an op-ed in the Woodland Daily Democrat heavily critical of Supervisor Don Saylor.

Supervisor Saylor had some concerns about the DA’s budget and Matt DeMoura in a letter signed by 32 other employees of the DA’s office offered some rather pointed criticism.

He wrote: “These principles call us to question the recent actions of Supervisor Don Saylor, specifically that Saylor published a misleading, disingenuous letter in the press attacking the Yolo County District Attorney’s budget request and a supposed lack of transparency by the Yolo DA’s Office.”

As we pointed out at the time, that characterization of Saylor’s op-ed is itself misleading and disingenuous.  He had some concerns about the budget and aired them for the public to take note.

DeMoura pointedly charged, “Saylor is manipulating the recent calls for reform to set the stage for his own political performance.”

Later DeMoura charged that Saylor “recklessly suggest(ed) we are essentially hoarding money capable of general use and, finally, that he told the public we lacked transparency for failing to provide facts he knew he would have in exactly two days.”

He continues: “How could someone so vilify an agency in their public comments and then sit with an open heart and mind when conducting official duties? Here, not only did Saylor write a letter in the press singling out one county department, not only did he act alone and before hearing all the facts (like an angry, misguided TWEET), but also omitted key facts and told the public the DA has not provided something that he knew he would have in 48 hours.”

DeMoura concludes: “If Saylor wants to find a prosecutor’s office to be his political punching bag he should look elsewhere or, better yet, focus on the value the DA’s Office brings to the county.”

At the time, I and many others thought this op-ed was over-the-top and clearly disproportionate to the questions and tone put forward by Supervisor Saylor, who as an elected official has a duty to oversee the budget of the DA’s office and ask tough but reasonable questions.

It is easy to chalk this up as an isolated incident but putting DeMoura’s public op-ed that was signed onto by 32 members of the DA’s office together with his apparent one-man right wing campaign opposing criminal justice reform—it seems that we should be asking tough questions.

As it turns out on Thursday, once again, the Yolo County DA put out a complaint about the zero bail schedule.

In a press release, they stated, “Since April 13, 2020, 349 individuals have been arrested and released on zero bail a total of 410 times, with some benefitting from $0 bail on multiple occasions.  The individuals who have reoffended since their release on Zero Bail in Yolo County have committed over 378 new crimes in Yolo County alone.

“Those new crimes include 154 felonies and 224 misdemeanors, including crimes such as Attempted Murder, Assault with a Deadly Weapon or Assault by Means of Force Likely to Product Great Bodily Injury (14 new victims), Robbery (5 new victims), Burglary (21 new victims), felony domestic violence (5 new victims), possession of an assault weapon, gang crimes, and dozens of other new felony and misdemeanor crimes.”

But as we have pointed out in several articles now – the DA’s office continues to attack zero bail even though in June they wrote a letter to the presiding judge requesting that they maintain zero bail and have at no point expressed an official view to the contrary.

And finally there was the high profile response from DA Jeff Reisig who seemingly overreacted to comments by Public Defender Tracie Olson on June 8 regarding the proportion of Black people held in Yolo County jail.  Reisig took her relatively innocuous and generic comments as a personal attack.

All of that leads us to wonder what exactly is going on here and how much Matt DeMoura is using the Reisig playbook and how much of this is just him acting alone.

22 thoughts on “My View: Who is Matt DeMoura and Does He Speak for the Yolo DA’s Office?”