After displaying a detailed organization chart of the department’s structure, Pytel explained the difference between sworn (left side) and non-sworn officers (right side) that is illuminated on this chart. Armed law enforcement is typically what is thought of for a sworn officer, while non-sworn are the support staff who focus on more de-escalation and proactive measures. 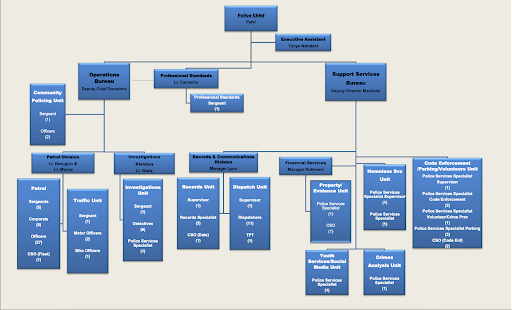 Commissioner Donna Neville asked Pytel about the “formula” used to determine how much overtime you give an employee, compared to the alternative of hiring another person to split the work. Pytel explained that “there is certain overtime that is unavoidable,” for instance, “all the court time occurs during [officer’s] off duty time,” and this is required overtime pay.

“If we have a serious felony that requires an investigation and crime scene people, we aren’t staffed at that time to deal with that.” Pytel elaborated to the commission that “they are coming in at overtime.”

The issue of staffing is not as straightforward as many may believe. Pytel explained that excessive overtime is unavoidable and more cost effective in the long run than attempting to increase staffing.

“Our policing style in Davis is community oriented policing,” Pytel stated. “That has been our primary philosophy.” This structure and ideology behind local policing has been maintained since the 1960s.

“Things have changed over the years and community policing has evolved into community oriented policing and problem solving,” Pytel stated, shedding light on how the public’s demands for lessened police presence are being implemented.

When asked by commissioner Doug Buzbee how the police department is shifting to a more non-sworn officer response, given that 97 percent of police calls are for non-violent situations, Pytel responded that it is far more difficult than it is made out to seem, stating, “non-sworn are not interchangeable with sworn [officers].”

Pytel also stated, “You have got to remember, when people are saying the 97 percent of the calls can be handled by non-sworn, that is not accurate.” He claimed that the numbers “don’t really describe what it is that police officers respond to and do, versus what non-sworn can do.”

In response to Buzbee’s original question regarding a shift to non-sworn officer response, Pytel ultimately responded “no,” that the police department is not attempting to shift away from police response to calls, “not unless people are really willing to call 911, for an emergency, and there is no response.” He informed the commission that this is the reality if the police department were to cut just a few more of the sworn staff.

department has occurred in the past couple of years. The homeless services organization was actually created due to excessive calls of service regarding homeless in the area. Pytel stated that “it made sense to have dedicated personnel who are able to respond to those calls of service and handle some of the services.”

Pytel discussed how Ryan Collins, the supervisor for this unit, became very involved in policy development in both a city and regional sense and has been striving to combat homelessness from a mitigation platform, not just a temporary fix.

Some of the crime statistics for Davis were highlighted in Monday’s meeting. Pytel stated that “people are coming to Davis all the time and committing crime here,” claiming that the “majority of the people we arrest in Davis are not Davis residents.”

There has been an “increase in stolen vehicles, larceny and burglary, and aggravated assault,” Pytel stated, “pretty troubling numbers.” Homicide has remained low and steady; Davis does not experience high levels of this crime typically, it is a very uncommon occurrence in Davis.

“The COVID crises brought on increases in aggravated assault, and burglary and larceny have been going up,” as well as increases in stolen vehicles, Pytel reported. He stated that the trends we are seeing are pretty consistent with “trends being reported around the region, and statewide, in some cases nationally.”

Sexual assault in Davis is primarily tied to UC Davis students Pytel informed the commission, it is “more the acquaintance type category and not the stranger sexual assault.”

Commissioner Michelle Weiss asked Pytel about the relationship the police department has with UC Davis, and the UCD police department, in which he responded that “we do work well together,” however the campus police “have their own staffing issues.”

Pytel explained that the UC Davis police department is in charge of both the main campus and the medical center that is located in “a very busy part of Sacramento,” dealing with violent situations daily with a busy emergency room because “they are the trauma center for the region.”

Highlighting the struggles of not just the Davis police department, but the campus police as well, Pytel informed the commission that “they are fielding generally one officer for the entire UC campus.” He said that even the “chief is primarily moved over to the med center, especially now.”