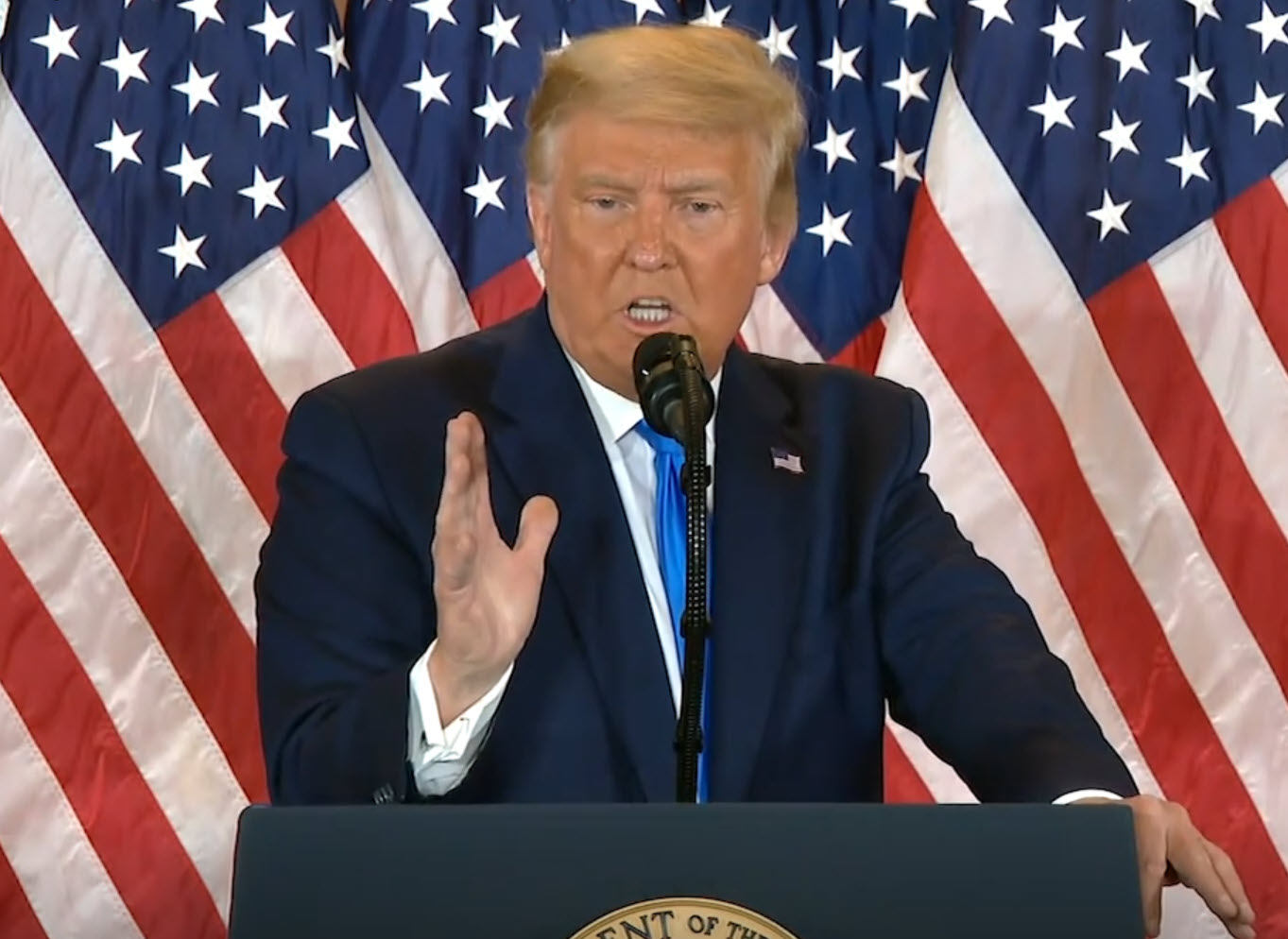 When the media kept asking whether Trump would accept the results of the election, this is what people worried about probably most.  There was a slight chance that he would tried to use extralegal means to accomplish this and a good chance that he would deploy legal tactics in court.

The former was always unlikely, the latter is frankly acceptable and appropriate, but the middle course in here is more insidious and dangerous to the fabric of this nation.  Nothing is more important to a functioning democracy than the legitimacy of the process and now the President making a campaign speech from the White House itself has blatantly undermined it.

Later he would say, “We were winning in all the key locations by a lot, actually, and then our numbers started miraculously getting whittled away in secret…”

The reaction by Republicans has been mixed.  Rick Santorum a former Senator from Pennsylvania, now an analyst on CNN called the claim of election cheating, “dangerous.”

“No Republican elected official is going to stand behind that statement. None of them will,” Santorum said.  He acknowledged that much of his statement was “not factual and was at times incendiary and not something a president of the United States should say.”

“I know there’s a lot of people who think this election’s stolen, a lot of people think there’s fraud,” he said. “There may be fraud, we don’t know that right now. For the president to go out there and

claim that without any evidence of that is, is dangerous.

“I just would say to the president, there may be some validity in some of the things that you believe but to go out there and suggest that this is rigged … no.”

But some Republicans stood behind his comments.  Lindsey Graham and Kevin McCarthy backed him up.

“Every American should stand up. Whatever they see … tell us if they see something that’s incorrect out there,” McCarthy said. He later added, “Do not be silent about this. We cannot allow this to happen before our very eyes.”

Newly Elected Senator Tommy Tuberville in Alabama called on them to stop counting the ballots, “The election results are out of control. It’s like the whistle has blown, the game is over and the players have gone home, but the referees are suddenly adding touchdowns to the other team’s side of the scoreboard.”

The problem here is that there is a sizable percentage of people who will simply believe whatever Trump says.  And he is being backed right now by leaders in the Republican Party – at least some of them.

A lot of people do not seem to understand why the vote count is proceeding the way it is – understandable perhaps for members of the public, but for political leaders and the President from the White House, that is unacceptable.

There are a lot of people pointing their fingers at the polling – and I think without defending it necessarily, we should understand two critical things.  First, until all of the ballots are counted, we really cannot reach conclusions.  I suspect, if things go as they are right now, we will actually see the polls did reasonably well.

Second, polls are only as good as our ability to model and anticipate voter turnout and as we see already, we have record shattering turnout.  Given that, I think it is natural that the polls would have been off by some.

People need to understand some basic dynamics as well.

But Trump discouraged his voters from voting early and most of them voted on Election Day at the polls.

So in order to make sense of the returns – we had to understand several important things – (1) who voted – Democrat, Republican, Independent; (2) where were they voting – there are red and blue counties within states, and (3) how did they vote – mail in, early voting or on Election Day.

Each mechanism was different.  The early mail-ins and early voting heavily tilted Democrat, the later mail-ins were often more Republican (which is why Trump is closing the gap in Arizona) and the Election Day voting was often overwhelmingly Republican.

Watching the returns in places like Texas and Ohio – they counted the early votes first, which is why Biden started out in the lead, but ended up losing by healthy margins.

What we saw in Wisconsin, Michigan, and now Georgia and Pennsylvania was the opposite.  The remarkable thing about Pennsylvania and to some extent Georgia is that those early ballots even in very red counties, were heavily Democratic.  That’s why – as I write this – Biden now leads in both states and will likely win.

There is nothing nefarious there.  In the end, it’s going to be hard to challenge five or six states and claim that there was massive fraud.  But by Trump doing so, in the minds of his supporters, they will believe it and that is a problem.

The idea that we shouldn’t count these votes is absurd – if they have real evidence of fraud, by all means, challenge it in a court of law.  What they have filed so far has been quickly dismissed except for on a technical issue in Pennsylvania in terms of monitoring.  We need transparency, but even Republican officials in Pennsylvania have not seen much to alarm them.

76 thoughts on “Commentary: This is What Everyone Was Worried About”