We have heard a lot of rumors about the Yolo County DA’s office—some have suggested that DA Jeff Reisig stepped back after his narrow reelection victory over Public Defender Dean Johansson.  He has certainly been less than visible this year.

There was the celebrated battle against Public Defender Tracie Olson where the DA attacked the Public Defender for her comments on TV on June 8 regarding the Yolo County jail.  But even that battle took place over press releases, not even in-person interviews.

Jeff Reisig has never spoken with the Vanguard—all we can do at this point is observe.  When the DA’s office presented their budget this year it was Jonathan Raven.  When the DA has pushed back on zero bail or has criticized the governor’s decision to grant parole to a convicted killer, it was Assistant Chief Supervising DA Melinda Aiello.  When the DA pushed back against Supervisor Don Saylor, it was Matt DeMoura.

Is this a signal that there is a vying for power inside the DA’s office?  Or just an evolution?  Hard to know.

You wouldn’t know it to look at him – diminutive, bespeckled, perhaps demure.  Matt DeMoura in person seems mild-mannered, perhaps bookish.  But as we saw in an op-ed in September in the Woodland Daily Democrat, he can be a vicious attack dog.  Hiding behind his PAC – Safe Neighborhoods Coalition, he is Trumpian.

One observer called this a very dangerous combination.

The Safe Neighborhood Coalition got involved a bit in the Yolo County SUpervisor’s race between Jim Provenza and Linda Deos.

But it also pushed right wing politics and anti-criminal justice reform politics.  Pushing for the doomed Prop 20 while arguing that “Prop 47 is murder.”

DeMoura also mixed it up with the Davis Police Accountability Commission.

Then he writes: “Pretty embarrassing for an organization that is about “accountability.””

He also challenged Supervisor Saylor in an op-ed, writing, “These principles call us to question the recent actions of Supervisor Don Saylor, specifically that Saylor published a misleading, disingenuous letter in the press attacking the Yolo County District Attorney’s budget request and a supposed lack of transparency by the Yolo DA’s Office.”

He added, “Saylor is manipulating the recent calls for reform to set the stage for his own political performance.”

Last week, the DA’s office once again attacked zero bail – even though they authorized it to begin with and have yet to formally ask for it to go.

The face of that fight has been Melinda Aiello, assistant chief deputy district attorney.  She wrote an op-ed in CalMatters pushing back on zero bail.

“The $0 bail policy is hampering the ability of those in public safety to honor their sacred commitment to victims and to the security of the communities they serve,” she said.

The DA’s office has put out release after release, but they have never acknowledged their role in maintaining the zero bail schedule.

In advance of the end of zero bail, Melinda Aiello, the Assistant Chief Deputy DA, sent out the DA’s policy on the statewide emergency bail schedule.

Aiello wrote that “we recognize the on-going need to maintain a reasonable jail population and after consultation with County Counsel encourage the court to return to its Emergency and Provisional Bail Schedule that became effective March 26, 2020.”

At the same time, in August, she went on Fox News to push back on the release of a convicted killer.

She told them that “as a career prosecutor, I cannot emphasize enough how horrific of a conversation I had to have with Dena’s family to deliver them the shocking news that Terebea Williams was going to be released and that they had absolutely no say in the matter.”

She continued, “I want to emphasize that as prosecutors were absolutely appalled at the lack of transparency at the release decisions that are being made on the state level, CDCR has already released over 10,000 inmates who were convicted and sentenced to what we call a determinant term. They had a determined outdate.”

But she added that “now CDCR has expanded their efforts, and they’re including violent criminals, including murderers, and that’s the situation that we have here with Terebea Williams.”

The host then quoted Melinda Aiello on the zero bail policy where she wrote, “As a society we can never lose sight of the fact that nearly every crime, even those dubbed ‘low level’, has a victim. Simply dismissing a crime as low levels diminishes the very real and life altering impact that these crimes have on victims lives.”

The other Assistant Chief Deputy DA has been pretty quiet this year.  In the 2018 campaign, he was the attack dog.  He is also the Deputy DA who ambushed the Ajay Dev team that has effectively shut down the habeas corpus evidentiary hearing for the past year.

He is probably best known for his courtroom theatrics.

Back in 2011, there was a trial in Yolo County in which Couzens brought in multiple jurisdictions, organized a SWAT raid, with helicopters and the works and they busted into this compound which was supposed to be an Asian Gang drug operation.

The result of the raid was caffeine pills, powder that turned out to be ibuprofen, and the kicker – 1.4 grams of methamphetamine.  Far from an operation to support a gang – the value of the meth packaged was about $40.

But Ryan Couzens, not backing down to the jury, doubled down in his closing arguments.

He told the jury he was a very aggressive attorney especially about gangs and crimes – he said the same for his office.  He said that if he allows “specks of methamphetamine” to go unchecked, if we allow a fledgling gang to go unchecked, just because it is a fledgling operation, that “that’s throwing in the towel.”

The jury didn’t buy it.  At times Ryan Couzens can be very effective and persuasive.  At times he can be his own worst enemy. 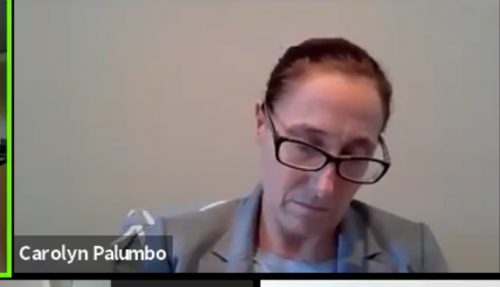 My enduring memory of Palumbo was following a mistrial in the 2010 Galvan Trial, Carolyn Palumbo asked Judge Fall to clear the courtroom.  “There are bloggers, blogging all over the place about this trial.”

The bemused Judge Fall informed her that he happened to believe that the First Amendment was the best thing since sliced bread.

A few weeks ago she had a curious exchange with visiting Judge Renard Shepard.

“These folks get OR’d from the jail?” the judge asked.

“Both.  A lot of times, they just release them,” Palumbo responded.

“Is your jail overcrowded?” he asked.

“We just are more progressive than some other counties,” Sequeira responded.

“They let these felons go out on the street like this?” the judge asked.

“Judge,” Sequeira said half-laughing, “they are presumed innocent at this point, judge.” 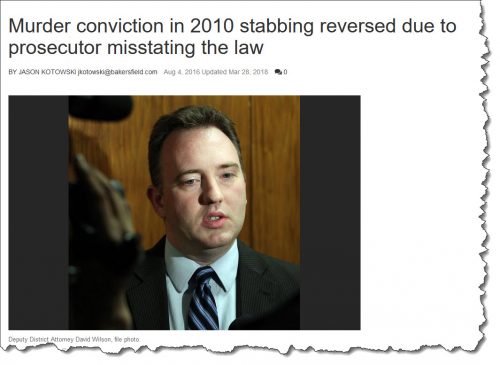 In September we covered the story of David Wilson.  The Yolo County DA last fall hired hired David Wilson, who had been a Kern County Deputy DA, despite having a murder conviction overturned due to misconduct—he misstated the law to the jury, causing a conviction to be overturned.

In 2016, a murder conviction from 2010 was overturned by the state appellate court after ruling the prosecutor, David Wilson, had inaccurately stated the law to jurors during the trial.  The 5th DCA ruled that Wilson “misstated the law when he implied the jury could not consider evidence of the defendant’s ‘delusional symptoms’ if they were connected to the defendant’s drug use.

“Since the prosecutor’s comments mischaracterized the law, and there is a reasonable likelihood the jury was misled, the comments constituted misconduct,” stated the court’s ruling, as reported in the Bakersfield Californian.

“The unmistakable implication of the prosecutor’s comments was that the distinction was legally significant, when, in fact, it was not,” the appellate court said in its ruling.  The court found that the jury would draw the logical inference that they had to disregard delusional symptoms entirely if they were related to meth use rather than schizophrenia.

That isn’t the law.

“Under the law, the jury was free to consider the effect of Hardin’s psychotic symptoms on his mental state regardless of whether the source of the symptoms was his diagnosed schizophrenia, his diagnosed substance-induced disorder, or both,” the court said.

This is yet another questionable hire by the DA’s office.  In 2015, the Yolo County District Attorney’s office announced via Twitter that Deputy DA Frits van der Hoek had been sworn in as the newest member of the YCDA’s team.

Just over two weeks after the May 6 announcement, Frits van der Hoek was officially cleared of his part in the fatal February 2014 shooting death of 38-year-old Antonio Lopez, just off campus, 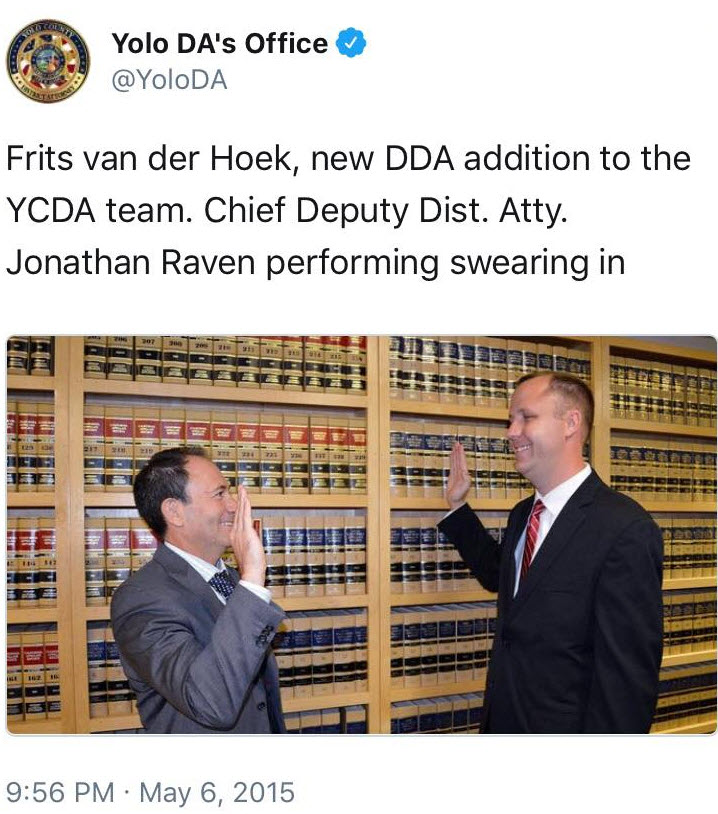 when he was a San Jose State Police Officer.

Despite being cleared, this was an extremely controversial and questionable shooting.

According to the report released by the Santa Clara District Attorney’s Office, Mr. Lopez was shot twice during the confrontation with Officer van der Hoek and Sergeant Mike Santos, who ultimately shot him.

Officer van der Hoek ordered Mr. Lopez to “drop to the ground” while Sgt. Santos told him to “put that on the floor,” in reference to the knife (which may have been a drywall saw).  At this point, van der Hoek tried to fire his Taser, but the prongs could not penetrate Mr. Lopez’s clothing.

Next, Lopez allegedly advanced on Officer van der Hoek, who yelled to his partner to “shoot him, shoot!”

Asian Law Alliance executive director Richard Konda was allowed to watch the video that the public hadn’t.  He said he believed Lopez was attempting to flee rather than charging the officer.  After watching the video, he told the media, “I didn’t see him make any aggressive move toward any person.”

13 thoughts on “Monday Morning Thoughts: A Look at the Yolo DA and the Question – Is There an Internal Battle on to Replace Reisig?”