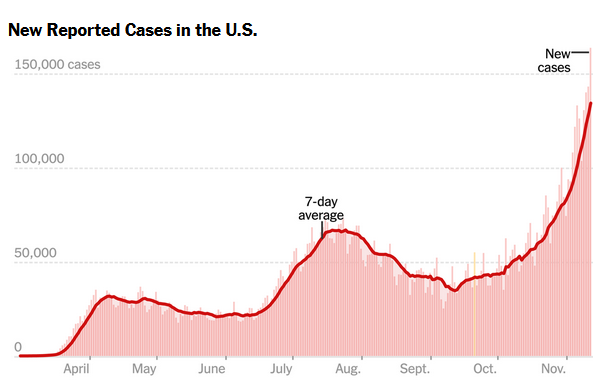 One of my favorite conspiracies from people was the assertion from some that COVID will disappear on November 4.  The clear implication is that this was a manufactured crisis designed by some nefarious force and stoked by the media to get President Trump out of power and that, once he was safely gone, life would resume back to normal.

Instead, the latest surge that began toward the end of September when the number of cases had greatly declined has reached such heights as to dwarf the previous outbreak and, unlike the first or second waves which had hit selective states, this one is hammering the heartland—although the two coasts are moving slowly into the red as well.

Earlier this week, we had some good news with Pfizer’s vaccine showing strong potential to be effective.  They are hoping to be able to roll it out by the end of the year.

That prompted one commenter to write: “Thanks Trump for fast tracking and funding COVID vaccine research.”

While that part is good, we can debate over how much of a role the President played in it and whether another administration would have really been that different.  BUT, in the wait until we get a vaccine—if we do—we are getting hammered and it appears that the President has completely checked out on this issue.

Trump’s energy has been focused in challenges to the election that increasingly resemble tilting at windmills.  He has filed 18 lawsuits so far, with only one producing anything that could be called a win—it required Pennsylvania segregate late ballots, something they were doing anyway.

While Trump disengages from actual governing, it has been left to President-elect Biden to pick up the leadership, even though he won’t have formal power for another two months and a week.

The New York Times reports this morning, “President Trump broke his near-total silence on the coronavirus on Friday with an appearance in the Rose Garden in which he threatened to deny New York access to a vaccine.”

“I will not be president until next year,” Mr. Biden said. “The crisis does not respect dates on the calendar, it is accelerating right now. Urgent action is needed today, now, by the current administration—starting with an acknowledgment of how serious the current situation is.”

The President, for his part, hailed the news of the vaccine, but has so far vowed only not to order widespread lockdowns.

He also threatened to withhold the vaccine from New York because Governor Andrew Cuomo had said that the state would conduct its own review of the vaccine.

“He doesn’t trust the fact that it’s this White House, this administration, so we won’t be delivering it to New York until we have authorization to do so,” President Trump said.  “So the governor will let us know when he’s ready. He’s had some very bad editorials recently about this.”

I for one will not miss the confrontational press conferences and look forward to a President who views this nation as a partner, rather than divided into friends and adversaries.

From the start, the President has provided little leadership on this.  And, while it is true he pushed the election far closer than most expected at the end, he can owe the fact that he lost reelection to his failure to respond here.

A vaccine will prove to be a potential life saver, but, as we wait for that, the death toll is likely to set new records in the coming days and weeks, and federal resources are needed and are in short supply.

Governor Tony Evers of Wisconsin, for example, where new cases reached over 8000, said that whatever the President said right now “could not make up for his refusals to wear a mask and his embrace of large public gatherings, at campaign rallies and at the White House.”

Evers said the administration personnel “report to a president who, frankly, isn’t the most consistent one as it relates to the things that count: masks, and making sure you’re not in public gatherings with a whole bunch of people to spread the disease.

“They’re not going to play a huge political role here,” he added.

We want to celebrate a vaccine a few months off—fine—but we need help now.  The people dying today aren’t coming back at the end of the year when a vaccine comes out, if it does.