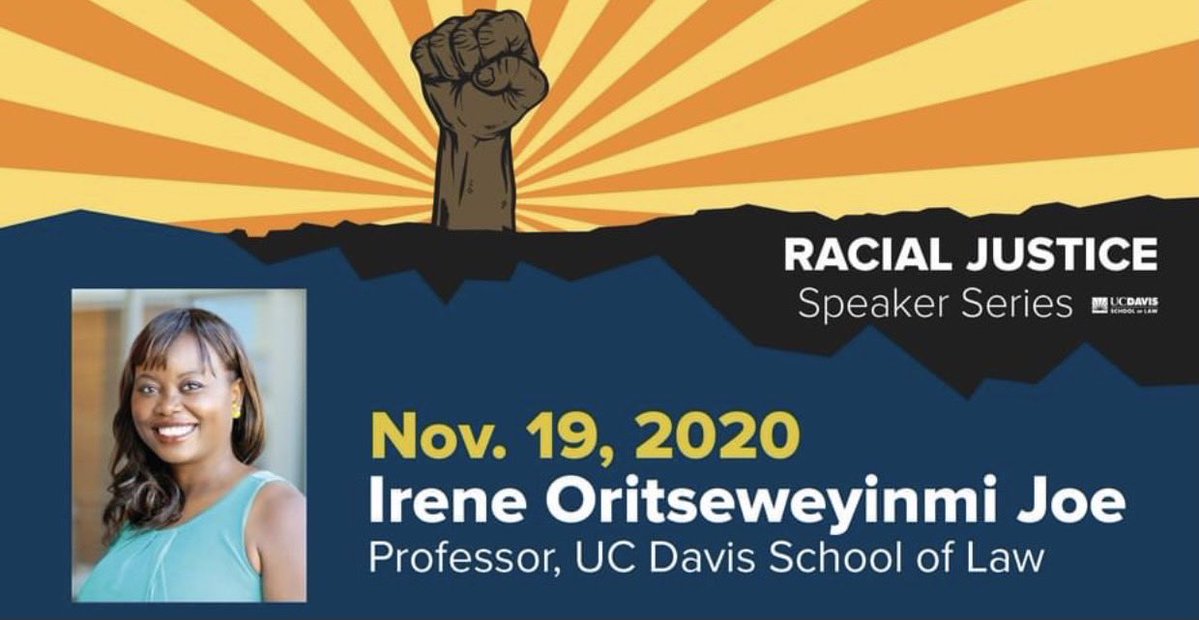 DAVIS – The UC Davis School of Law finished its racial justice speaker series with a talk from Professor Irene Oritseweyinmi Joe, analyzing the ways in which public defenders’ roles do not properly address racial injustice.

Professor Joe used her past experiences and studies to explain how the shortcomings of the people affected by misdemeanors need to be reflected upon the public defender institution to fully protect people from racial abuse, especially for people of color, such as African American and Latinx communities who are affected the most.

Joe’s main two points were how the public defender’s offices do not provide quality representation for their clients, especially when it comes to a misdemeanor, which may seem not as important to bigger cases like felonies, but they are just as important. Since 80 percent of cases in the criminal justice system are misdemeanors, along with how the staff of these institutions are not properly supported from the emotional toll, they are affected through second-hand trauma.

The mistake that some public defender institutions make are the ways that they distribute misdemeanor cases.

While this does make sense, Professor Joe said, “I argue that defensive leadership should consider doing the opposite, that is, emphasizing misdemeanor offenses by assigning more experienced attorneys to those defendants as a recognition of their role as government agents tasked with distributing a limited amount of resources to a large group of entitled persons.”

Joe believes that the public defender institutions should think about their distribution decisions and the effects they have on the client population.

The U.S. criminal justice system affects and controls the behavior of Black and brown people by transplanting them to new communities that are under constant surveillance, regardless if the system even sends them to jail or not. The criminal justice system uses electronic surveillance that monitors and tracks people and forces them to report on their living situations and requires them to attend classes and take drug tests.

“There is essentially a racial caste system in this country that helps solidify the unequal distribution of wealth and benefits,” Joe said.

People of color in America have more difficulty gaining opportunities in life within areas of education, healthcare, employment, housing and the justice system.

Misdemeanor representation needs to change, such as a mixed attorney load that allows a more even distribution of cases so that it better helps the client population.

The second point in her research is to find better ways to support the attorneys when it comes to secondary trauma, defined as the stress resulting in the efforts associated with trying to help someone.

The professionals who try to help people are at risk for secondary trauma.

Public defenders have secondary trauma towards their difficulties with their clients from being incarcerated.

Joe also noted that especially now during the COVID-19 pandemic, mental awareness is important because a lot of public defenders have been put under extra stress because they cannot help their clients or even properly visit them to give them proper, and these attorneys feel as though they are failing their clients.

She believes that the public defense institutions should pay particular attention to the experiences of the African American and Latinx members of their staff, as they are affected the most.

Mental health challenges are heightened for those who are fighting for people who look similar to them or have even gone through similar experiences.

Professor Joe is studying further into the public defender institution to better reflect the needs of the community and to not be biased on those who make decisions because there should be an aim for improvement for public defenders to support their clients to their best ability.