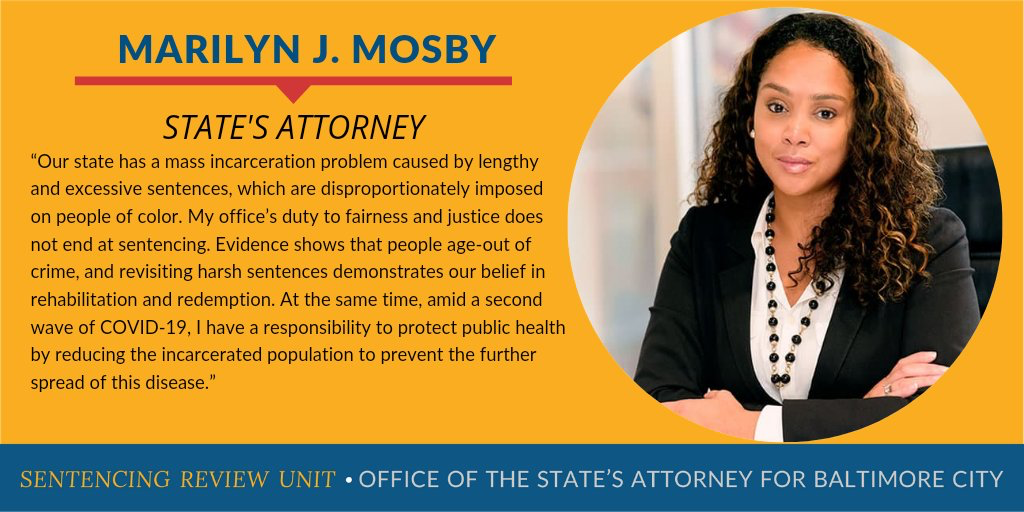 State Attorney Marilyn Mosby believes the creation of the SRU is critical in responding to racial inequality and hedging against Covid-19 in Maryland’s prison system, according to a press statement Monday.

She stated that “Our state has a mass incarceration problem…which are disproportionately imposed on people of color.”

Additionally, she acknowledges that “amid a second wave of COVID-19, I have a responsibility to protect public health by reducing the incarcerated population to prevent the further spread of this disease.”

Senator Cory Booker (D-NJ), who introduced the Emergency Community Supervision Act to address Covid-19 in prisons, commended Mosby on her decision and “hope[s] other cities and states will follow their lead.”

Maryland’s steep incarceration rate, especially of People of Color, inspired the creation of the SRU.

The State Attorney’s Office cited data from the Department of Public Safety and Correctional Services to underscore the severity of African-American disenfranchisement in the prison system that noted “almost 80 percent of the 2,200 prisoners currently serving life sentences throughout our State are Black…94 percent of the more than 800 prisoners sentenced to life in Baltimore City are Black.”

Mosby’s office specifically called out prosecutors, stressing that “prosecutors have historically played a role and contributed to the epidemic of mass incarceration and racial inequity in this country

and have a responsibility to right that wrong.”

Another reason for the creation of the SRU includes reducing the threat of Covid-19 in the prison system and “the amount of precious local resources spent on incarceration by…releas[ing] those who pose no public safety threat to the community.”

Already Mosby’s office “has been successful in reducing the number of people entering the jail system by almost 45 percent due to our decarceration policies and by supporting the early releases of certain individuals.”

Nevertheless, she questions “whether we’ve done enough for those most susceptible to contracting COVID-19 in prison serving life sentences.”

Mosby is not alone in asking this question. A number of other Attorney offices across the nation from Seattle to Philadelphia to San Francisco to Brooklyn are wondering the same. These offices have also established SRUs.

To explain why this issue matters to the average citizen, Mosby emphasizes that “jails remain a public health risk and a breeding ground for COVID-19 that imperils not only every person inside of those facilities, but the broader community.

“We have seen over the past year that once that virus enters the prison, it spreads like wildfire because quarantining and social distancing, which are essential prevention strategies for the virus, cannot work for people living in crowded dormitories with 70 to a room or having meals together,” she added.

For this reason, Mosby’s office wants to do “what many other cities have done, which is to release those who pose no public safety risk to the community.”

Regarding the release of individuals over age 60, “FBI Crime Statistics bear that out with people over 60 responsible for three percent of violent crime arrests nationally.”

The press release cites Unger v. Maryland which saw the release of two-hundred “lifers”, the majority of which “were over 60, and 97 percent have been successful in re-acclimating into their communities.”

In light of these findings, Mosby’s office recognizes that “it is a waste of money to continue incarcerat[ing] those who pose no public safety risk.”

Mosby’s office also disagrees with the stringency of the state’s current limits on juvenile parole, arguing in the press release that “juvenile lifers deserve second chances.” If all eligible juveniles are released on parole, that would decrease the inmate count across all state prisons by two-hundred members.

Since the 2016 Supreme Court ruling that requires the criminal justice system treat juveniles differently than adults, twenty-three states across the nation “have banned juvenile life without the possibility of parole sentences, recognizing that what you do at 16 years of age should not always define who you are at 70 years of age.”

Maryland, on the other hand, remains “one of three states that require[s] approval from the governor as part of the parole process.” About 300 juvenile lifers – people sentenced to life prior to the age of 18 – have been denied parole.

Despite the goal of reducing inmate population, Mosby claims that public safety will take precedence throughout the review process.

A victim survivor of a homicide attempt herself, she promises that “victim/witness/survivor support has always and will remain a priority for this administration and especially for the SRU.”

Feldman lost her brother to a Baltimore homicide back in 2000, which launched her into the field of public justice. In spite of this tragedy, Feldman held no qualms representing incarcerated individuals. In fact, she reports that doing so “brought [her] healing and purpose.”

Feldman’s belief in the “humanity, talent and kindness behind prison walls” spurs her efforts to nourish reconciliation between victims/witnesses/survivors with their attackers.

In addition to implementing this new process, the State Attorney’s Office will offer “services such as lifetime grief counseling through family bereavement and grief counseling, information on the legal process, and more” through the Victims and Witness Services unit.