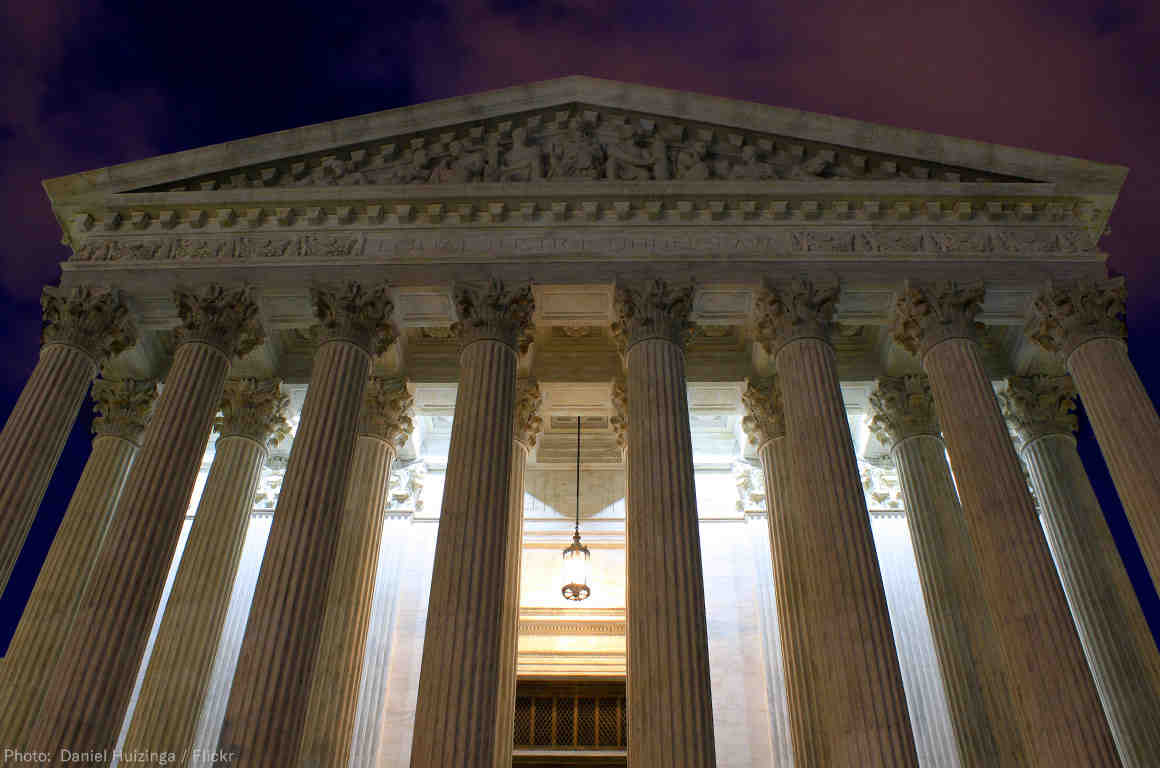 There was an interesting moment yesterday, as the US Supreme Court issued a 7-2 ruling rejecting the Texas lawsuit that was joined by 17 other attorneys general across the county and signed onto by more than 120 Republican members of country.  A few minutes later flashing across my screen was the typical 6-3 vote rejecting another stay of execution for another person needlessly to be executed by the federal government in the waning days of the Trump administration.

It was a reminder that this conservative court, filled with three Trump appointees, twice in the past week stood as a bulwark for democracy—even as they needlessly put two men to death.

Seven to two is a bit misleading.  The majority ruled that the motion for leave “is denied for lack of standing under Article III of the Constitution” in that “Texas has not demonstrated a judicially cognizable interest in the manner in which another State conducts its elections.”

Justices Alito and Thomas dissented, noting, “In my view, we do not have discretion to deny the filing of a bill of complaint in a case that falls within our original jurisdiction.”  They note, “I would therefore grant the motion to file the bill of complaint but would not grant other relief, and I express no view on any other issue.”

I interpret that to mean that, while they believe they could not deny filing of the bill, they denied any further relief.  A technical issue to be sure.

Most experts did not give this effort any chance, despite the signing on of over 120 House Republicans.  Most experts now believe the legal avenues are largely closed.

Referred to under the code-name, “Spyder,” he alleges that publicly available data about server traffic shows that voting systems in the United States were “certainly compromised by rogue actors,

such as Iran and China.”

The Post identifies him as a 43-year-old information technology consultant from Dallas.  The Post notes, “Records show that Merritt is an Army veteran and that he enrolled in a training program at the 305th Military Intelligence Battalion, the unit he cites in his declaration. But he never completed the entry-level training course.”

The reality is that the Supreme Court, which many Trump supporters saw as their “trump” card, is not about to overturn the election.  The Electoral College will meet on Monday, and it will almost certainly vote to elect Joe Biden as the next President.

And then what?  Does this charade end?  There could be a play on January 6 by some Republicans in Congress—though they don’t have the numbers most likely to do much, and it is unclear what power they actually possess at this point to undo the will of the voters and the Electoral College.

The real question at this point is where does all of this leave us.

The Texas GOP Chairman issued a statement where he appeared to be calling for secession: “Perhaps law-abiding states should bond together and form a Union of states that will abide by the constitution.”

More concerning is the fact that 17 state attorneys general and 120 members of Congress would sign on to the Texas lunacy led by a Texas AG—who is under instigation for securities fraud and probably filed the suit as an audition for a presidential pardon.

This was a close election, but really not that close with a 4.5 point margin and 7 million vote gap.  That puts it as the second largest gap behind 2008, this century—a century notable for its close elections.

I have seen references from some Trump supporters that this was the most corrupt election in US History—an assertion that is not only contradicted by the lack of evidence of systemic or widespread fraud, but also history.

But that’s what should really scare us here.  The election of 1876 probably actually deserves that honor, and it took a deal to end Reconstruction to seat Rutherfod B. Hayes.  Then 1960, many argue with actual justification, may have turned on returns from Chicago precincts withheld by Mayor Daley and perhaps Texas, which had already seen Lyndon Johnson clearly steal the 1948 Senate race (as chronicled in Robert Caro’s gripping account).

That election came down to about 31,000 votes in those two states in a race ultimately decided by less than one-tenth of one percent.

Then of course there is the 2000 Presidential election which came down to about 500 votes in Florida.  The US Supreme Court by a 5-4 vote shut down the recounting of ballots there, but later analysis from the NY Times found that even a full counting using the most liberal methods would have still rendered Bush the winner—however, they also found the butterfly ballot may have played a huge role, with tens of thousands of votes for Gore and a third party spoiling the ballot, suggesting that without such confusion, Gore may well have won.

That’s wasn’t fraud per se.  As I put it at the time, Florida simply was so close that it was within the margin of error.

This election was not that close by those standards.  Biden won narrowly in states like Georgia and Arizona, but actually didn’t need to win either of those states to prevail in the Electoral College.

It is worth noting and commenting that just about every state and local Republican official whose judgment and authority actually mattered, particularly those in Arizona and Georgia, put professionalism over their political expediency.  Judges, whether they were Democratic or Republican appointees, held their independence.  Local election officials were generally beyond reproach.

But what happens next time?  What would have happened had this election been a lot closer?  More like 2000 or even 2016?  And does this become the new norm—that every time someone loses, there are wild allegations, lawsuits, and efforts by the President to convince state and local officials to ignore the will of the voters?

We may have dodged these bullets and perhaps also the scenario where Trump refuses to leave—although we will have to see on that—this time, but what happens next time?  How do we function as a democracy when in one of its core tenets, we do not accept losing?

Share:
Tags:Supreme CourtTrump Administration
Previous : Letter: Involuntary Prison Transfers
Next : Student Opinion: The Chaos Of The Trump Years: It Didn’t Have To Be This Way

27 thoughts on “My View: Can We Survive This Moment?”