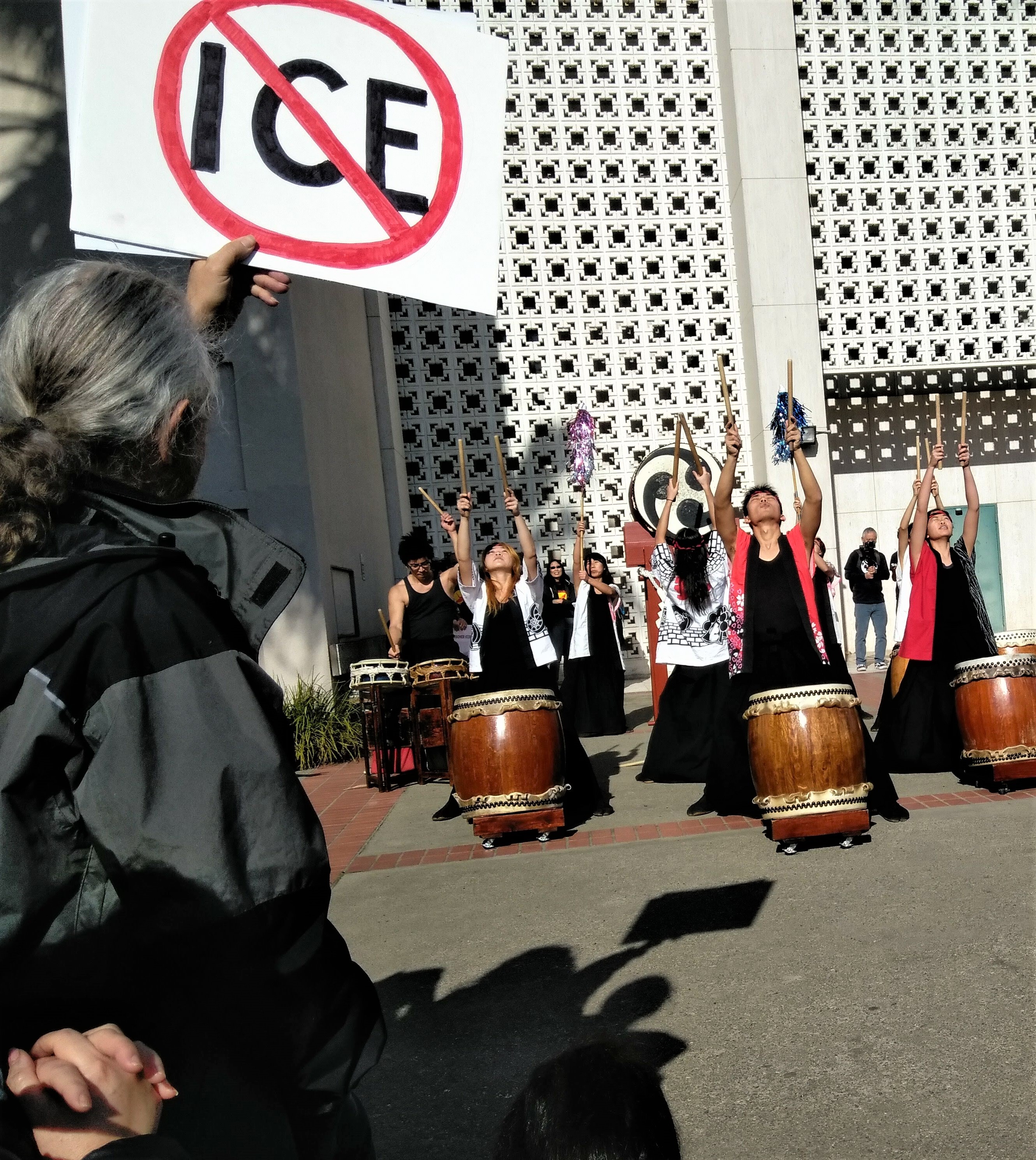 (Translated from Spanish by Nora Oldwin)

The Transparent Review of Unjust Transfers and Holds (TRUTH Act) requires that governors, who give ICE officials access to any person during the year,  hold at least one public community forum, to share information about how this access impacts lives. Whatever collaboration local police have with ICE is voluntary, as underscored by the Supreme Court in a lawsuit brought by Trump to test California’s laws contained in the Values Act (SB 54).

On Tuesday, December 15, a community forum on ICE detentions took place via videoconference. What follows is a brief summary of three testimonials offered in both Spanish and English, that were shared on that date:

Carlos spoke in English and Spanish; he introduced “Charles” as the first presenter. Charles began by raising awareness that we are living on stolen land. He then sang, and I could understand the language of the music itself, but I couldn’t make out the words although I felt the force of his intonation.

Charles was liberated from an ICE detention center after eleven months. He spoke of his family, and said that he couldn’t imagine a mother or father living apart from their children, away from family and community. He talked about the obstacles he experienced when he tried to find work, dealing with unnecessary restrictions that caused stress in the community, and that would cause stress for any nuclear family.

He recounted how he had been held in a private prison designed to hold 52 people, which-before a judge’s ruling about the maximum allowable capacity- had formerly housed 400 prisoners at once. Charles said that as long as these private companies make money from locking people up, there will always be people locked up.  Speaking in English, Charles urged everyone to continue to prioritize the well-being of their communities and of the families that comprise them, over compliance with state legal policies about identification and rules defining people’s identities.

He urged community members to speak out against these acts, to raise their voices, post in their social media sites; to share these stories, and organize: change will only begin to happen when people take action against injustices like these. Charles completed his speech by thanking Carlos for the opportunity to express himself, and offered his respect to both his listeners and to the

Enrique was the second person that Carlos presented. He spoke in Spanish, introducing himself and letting us know he was going to share his story with us listeners. He said he remembered his last hour in jail, in Elk Grove, well.

“The day was Wednesday, at five in the afternoon, they called me by name, and I was smiling because finally I had finished serving my sentence, and finally I would be free and could see and hug my daughter.” He said he was still in the jail, waiting for the person who was picking him up, when he heard an official call his name.

They said to him “Enrique! Go with the official, he will take you.” Enrique said he started to get a little nervous with the official right next to him, but his happiness and nervousness changed to fear, and above all to deep sadness. The official had told him that he was an immigration agent and no matter how much Enrique begged him, telling him that he had a daughter, to let him go (and here Enrique’s voice broke), the guard took him.

He remembered that they told him “You’ll be fine”- (at this point Enrique could no longer contain his tears; it was hard for him to speak). Shackled hand and foot, put inside a van- he was really scared. He was begging people to let him go, telling them that he had a daughter.

Then he was in Sacramento, in the Department of Immigration, feeling cold, a bitter taste in his mouth, and an overwhelming sadness.  He begged to be able to make a phone call and they told him that first they had to ask him some questions; after that he could call.

The call was to say “goodbye” but Enrique only knew one number by heart and that was his boss who he had worked for for thirteen years. Through his tears, Enrique explained his situation. “I still remember the hopeful words he spoke, I still remember that he said: ‘Don’t worry, we are going to do everything in our power to make sure you can be with your daughter again, and with us. We love you, Enrique’.”

After several hours in Sacramento, he was taken to Woodland and finally he was able to make a call. He tried to be strong and not cry when he had the opportunity to talk to his daughter, he didn’t want her to hear him being sad, but it was impossible.

During the ride from Woodland to Sacramento, from Sacramento to Stockton, from Stockton to Fresno and then to Vacaville, he felt a coldness, a sadness, and a strong feeling of uncertainty about the future. He said that it didn’t matter to him whether other people saw him cry or beg forgiveness for the bad decisions he had made, imploring God to give him strength, to take away the coldness that was destroying him from the inside. He disclosed that he still remembered this sensation.

From the time he got to the Immigration office in Vacaville there hadn’t been a day, not a night, that he hadn’t begged God for another chance to be able to see his daughter, and to be pardoned for his bad decisions. He said that the first months were the most horrible; that he wouldn’t wish that experience on anyone. He stated that while he was in Immigration, he attended classes on Christianity and Catholicism to soothe his feelings of sadness and fear of not knowing whether he would ever see his daughter again. Enrique stopped abruptly without saying more.

Carlos thanked Enrique for his braveness in showing his vulnerability, and for sharing and presenting his story, because his voice would help to stop “the transfers” [from prison to immigration].

Joe, the third presenter, spoke in English. He repented his bad decisions and took responsibility for his acts. He said that it took him years to change his consciousness, that he studied laws, and took classes to rehabilitate himself. Six months before his release on probation from jail, he was detained by ICE and they took him in handcuffs. From 2017 to 2020 he was in three different facilities: Elk Grove, Bakersfield, and the Yuba County jail. He was lucky to be released with an ankle bracelet; that way he was able to help his family.

Through his work as a paralegal, Joe had witnessed differences in sentence length for African Americans and Latinx persons compared with Angloamericans. He talked about the inequities of the judicial system and about the private carceral system. He also spoke about the impact of Covid19 inside the prisons, and named Mr. Mejía as the first ICE detainee to become infected with, and die from, Covid. He finished by denouncing the inhumanity of carceral conditions, and the brutality of confinement.

Juan Miranda graduated from UC Davis in 2018 with a PhD in Spanish and Portuguese and with an emphasis on Performativity Studies from the Graduate Performance Studies Group.