By Koda Slingluff and Jannat Alam

SACRAMENTO – A former California Highway Patrol employee, pleading guilty here in Sacramento County Superior Court this week of misrepresenting injuries for worker’s compensation benefits, had a change of heart when he learned his plea could affect potential gun ownership.

The defendant, James Clarke, had been previously employed with the California Highway Patrol. Upon hire, he did not disclose the existence of a preexisting condition, and is now charged with using the symptoms of the condition in a fraudulent attempt at gaining worker’s compensation.

Currently relocated to Kentucky, the defendant attended his arraignment via Zoom, intending to plead ‘no contest’ to the charges.

Morgan Forrest, Deputy District Attorney of Sacramento, said Clarke “…knowingly fail[ed] to disclose a prior injury and [made] material representations of physical symptoms, in order to receive benefits he was not entitled to from SCIF and the California Highway Patrol.”

Due to the location of the defendant, the prosecution is also quoted saying that they are “not requesting any kind of time associated with the penalty,” and instead are seeking financial compensation and formal probation of two years.

The prosecution did not have the conditions for probation available at the time of the arraignment, which prompted Judge Michael Savage to grant a continuance in regard to sentencing. Clarke’s defense, Barry Sullivan, agreed with the prosecution’s suggestion that they submit the plea immediately.

Judge Savage began to confirm the defendant’s understanding of the court proceedings and of the consequences of the deal. Clarke, initially prompt with his agreements, hesitated when Judge Savage asked if the defendant was aware that this plea deal prohibits the ownership of firearms.

“I do [know] now, I did not before,” responded Clarke. “I can talk to my lawyer about it, but I wasn’t under the understanding I would never be able to own a firearm.”

Judge Savage promptly informed the defendant of California’s ‘felon with a firearm’ law, which imposes a lifetime ban of firearm possession on those who have been convicted of a felony offense. Submitting the plea proposed by the court would activate this law in Clarke’s case.

Clarke then asked Judge Savage if it would be possible to continue the case on a later date, as he would like to confer further with his attorney.

“I did not understand that that was a consequence,” said Clarke, visibly shocked.

Judge Savage approved the continuance request, and moved to decide both the sentencing and the plea deal at a later date. The court will meet again regarding Clarke’s case on Feb. 11.

Jannat Alam is a third year at UCLA, majoring in English. She is from Fontana, California. 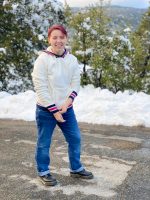 Koda is a junior at UC Berkeley, majoring in Philosophy and minoring in Rhetoric. He is from
Ventura, CA.