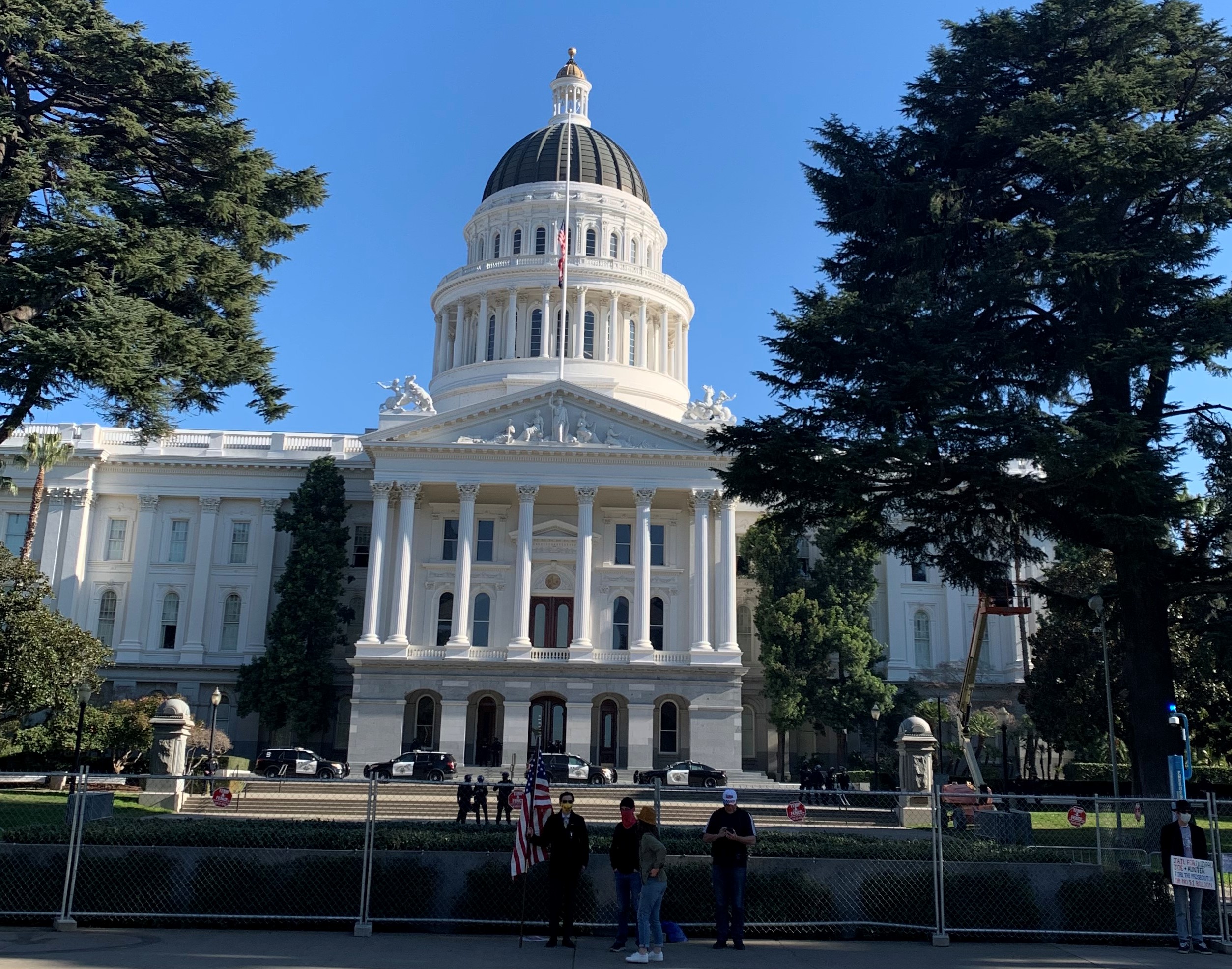 SACRAMENTO – Far from being a mass mob protest against the Biden-Harris Inauguration, the State Capitol and surrounding area here was more like a ghost town Sunday.

Except for law enforcement.

and around courthouses, the Capitol Complex and private businesses.

The California State Capitol, set to be the stage of “Let Freedom Ring” this Sunday—a protest against “our compromised election results” led by former Republican Congressional candidate Chris Bish—was instead empty and calm.

The Capitol building, housing the Governor’s office and Legislature, was locked down, but the buildings and streets throughout downtown Sacramento were starkly empty. 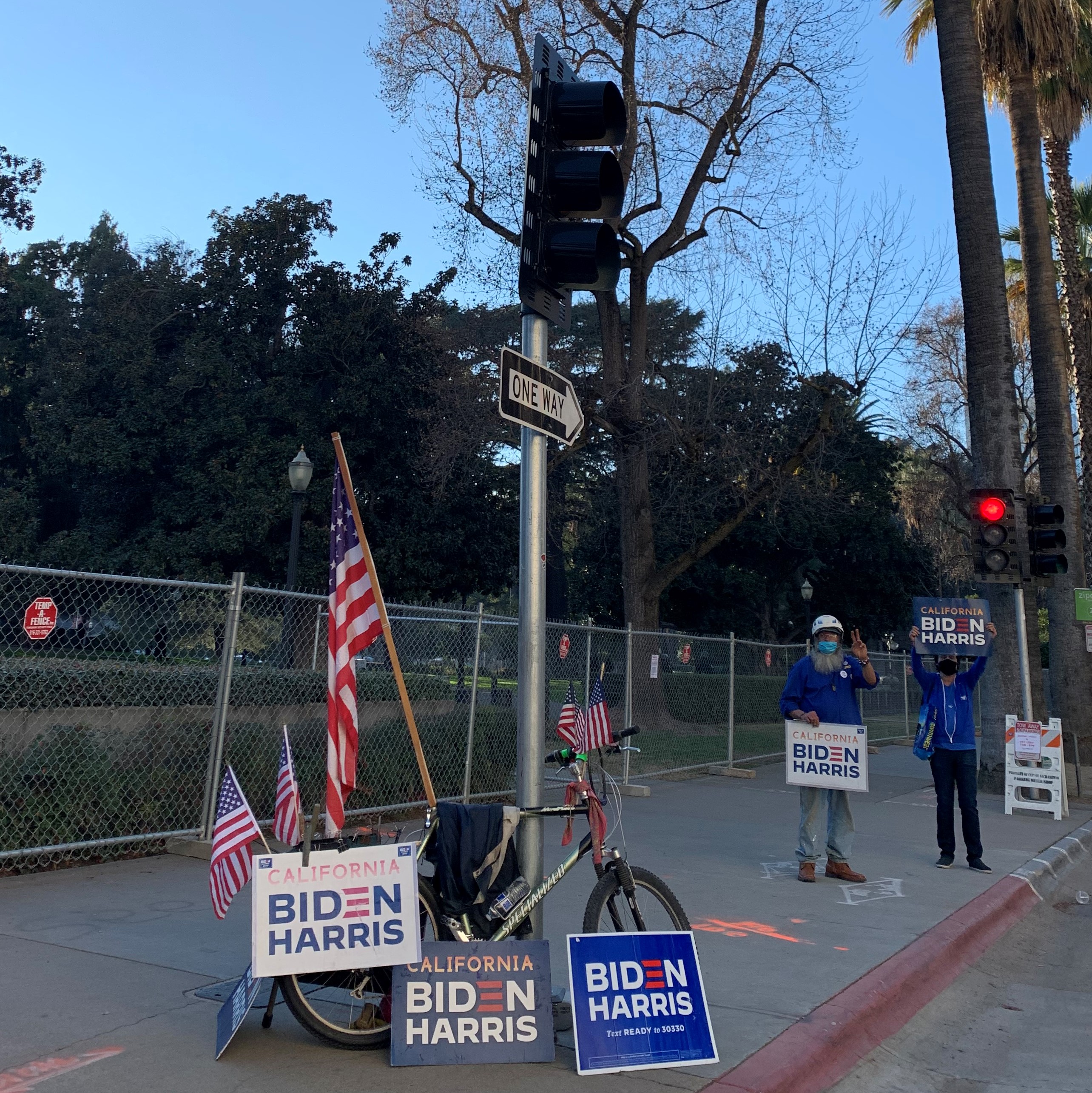 In the face of FBI-recognized credible threats to all 50 state capitols through the inauguration, including armed demonstrations, there was palpable eeriness to the warm January Sunday.

One woman stated as much to a CHP officer on the ground, and he agreed. With hundreds of Trump supporters expected to be flocking to Sacramento on January 6, despite not having a permit, the fact that were almost none today felt uneasy.

News agencies reported CHP’s denial of the “Let Freedom Ring” protest permit on the basis of the potential for civil unrest, and the anticipated number of attendees being in excess of that permitted under Covid-19 protocols.

However, the latter reason for denial seems at odds with the series of successfully permitted “Stop the Steal” protests that took place outside of the Capitol in Sacramento on weekends throughout December 2020, which were all in excess of gathering numbers safe for Covid-19, particularly in light of the minimal use of Covid-19 prevention masks by attendees.

While the initially planned “Let Freedom Ring” masses were nowhere to be seen, many residents passed through by foot, car and bike to photograph the National Guard presence in the area of the State Capitol.

In contrast to the up to 3,000 people Sacramento had potentially anticipated moving in this Sunday, the total gathered number of opponents to the 2020 Presidential election results present around the Capitol grounds throughout Sunday was less than 10—individual strangers to one another, not a coordinated group.

Of the few “Let Freedom Ring”-style folks present: a man in a “Keep America Great – Trump 2020” T-shirt held a sign that said, “Jail for Quid Pro Joe + Hunter; Fire the Prosecutor or No $1 Billion.”

Another man, in a suit and with an American flag on a pole at his side, wore a bright yellow face mask that read: “E Pluribus Unum”—soon-to-be former President Donald Trump modified his Presidential “Challenge” coin, given to service members, to read “Make America Great Again” instead of the traditional “E Pluribus Unum,” in December of 2017.

National Guard and CHP milled about, eating snacks, and chatting with their counterparts. A member of the National Guard noted they were present to “ensure people’s first amendment rights are protected, and to protect local government.”

People shouted “thank you” to members of the National Guard from their cars as they drove by. 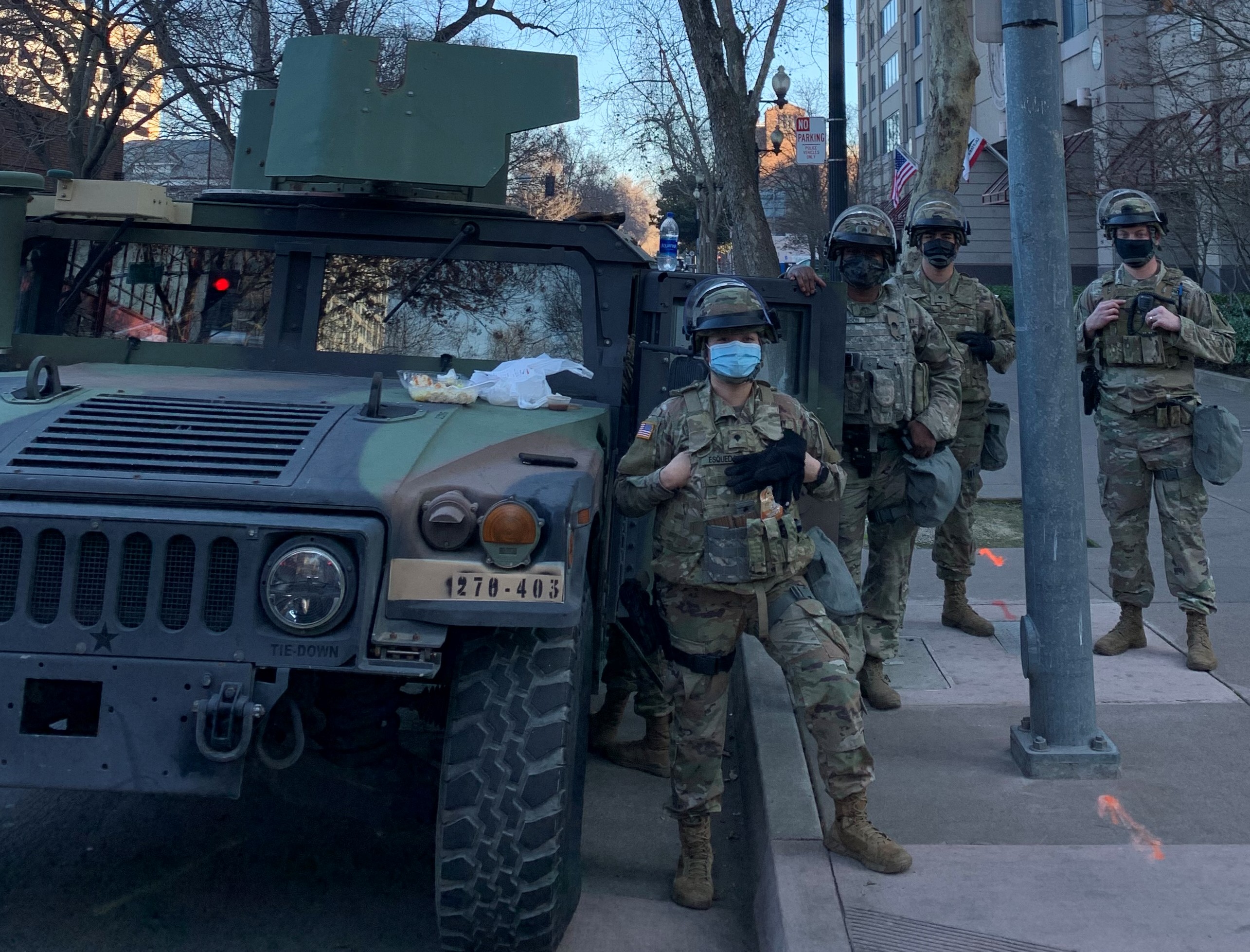 12 thoughts on “Huge Police, Military Presence Locks Down State Capitol – Only Handful of Protestors Show Up”