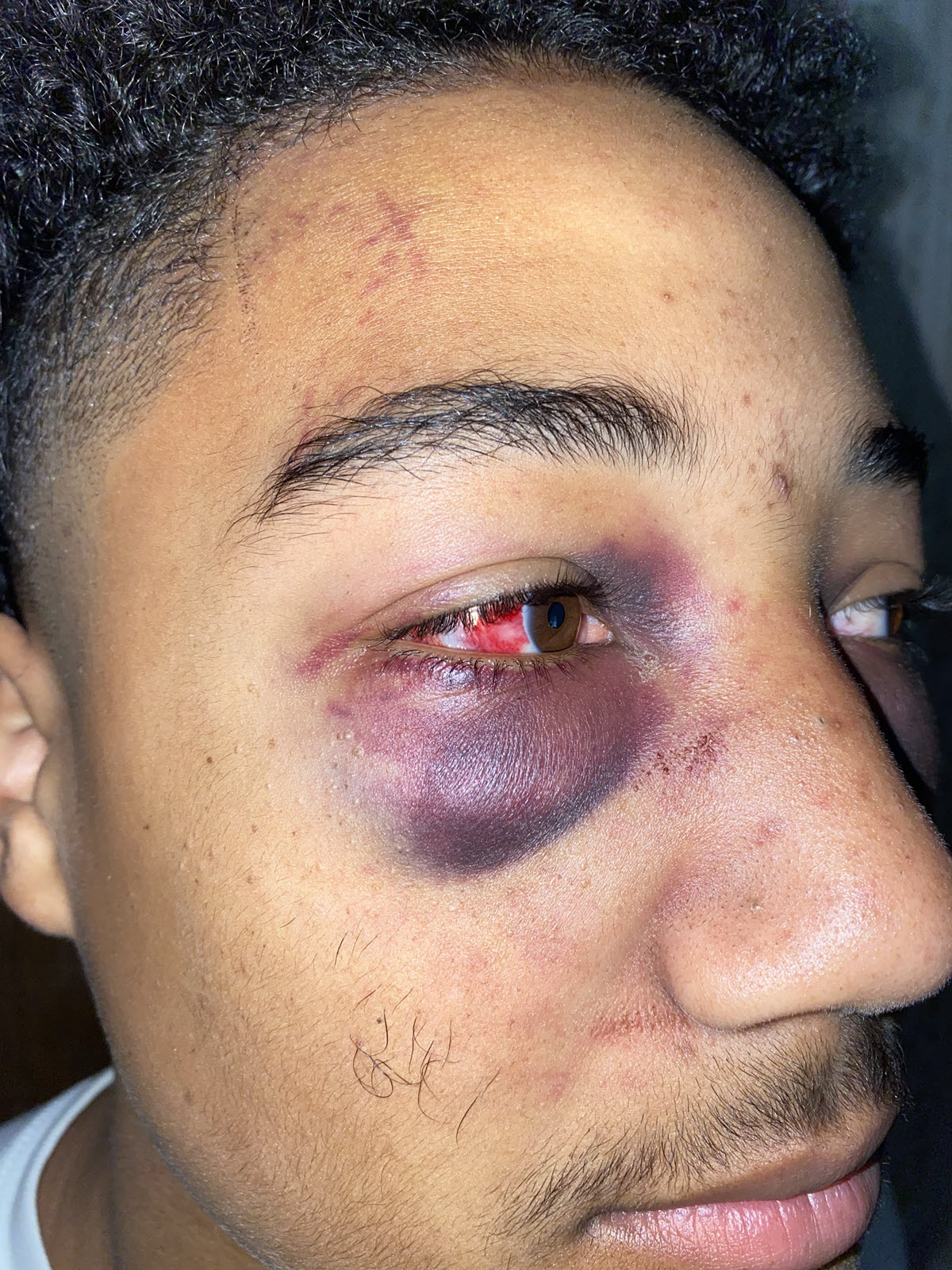 Attorneys for a 17 year old High School Senior in Stockton says on December 30 at 11 pm, the Black youth with no juvenile criminal record was stopped by Stockton police.  They claimed he was speeding on a dark road on the outskirts of town.

The student through his attorney, Civil Rights Attorney John Burris and his parents claim that he was initially unaware that police were following him.  Because of the dark location, his fear of the police, he sought to reach his father’s nearby house.  However, the police pursued him and eventually maneuvered him to stop.

It was at this point that things escalated.  According to his attorney’s account, he waited for the police to initiate contact, he placed his hands above the steering wheel and in plain sight.

However, a police officer jerked open his car door, yanked him from the car, threw him to the ground “without any warning or justifications.”

At this point, a large group of  Stockton police officers gathered around and beat him with their fists and feet.  He was hit in the face a number of times, kicked on his side, kicked and kneed in his back by as many as six officers.

John Burris who has been a civil rights attorney representing people in cases like this one for more than 40 years likened it to “a pack of wolves launched upon him.”

“They kicked him,” he said.  “He has footprints on his back.”

Burris described at least six police officers – all of them white men.

“From our point of view, it looks like this might be indicative of a pattern that exists out there in that location, where they’re harassing young African American males in cars,” he said.  “Stopping them.  Searching their cars.”

In this case, Burris claims that his client was never given a chance to talk or explain.  He was simply pulled out of the vehicle and “stomped” and “beaten.”

“The beating was pretty vicious,” he said.  “As beatings go, as vicious as they get.”

On Wednesday they filed a government claim, the first step needed in order to file a lawsuit.

In the complaint, they maintain, “As the minor laid in a fetal position on the ground, one unknown officer viciously struck the 17-year old minor in the face with his knee.”

“The minor continued to comply after being forcibly removed, slammed and struck in the face, however, officers continued to use excessive force on the minor. Minor D.C. did not pose any threat of harm to the officers while he was restrained on the ground. Therefore, officers were without just cause in using excessive force to detain minor D.C. when he showed no signs of resistance.”

Additionally, Burris claims, “after the minor indicated to officers that he was a minor, officers began to use vulgar language towards the minor which included but not limited to “Bitch” and “Asshole.”

Burris expected him to charged with speeding and probably resisting arrest, but he has not been charged as of yet.

He has requested the body cam video of the incident, but has yet to view it.

Burris charged that “The viciousness of the conduct reminded me of the Rodney King case that I worked on in the 1990s.  While the officers were beating King, they were telling him to stop resisting.“

“What was equally disturbing is that an officer tried to justify the conduct by falsely claiming that this boy threw a gun out the window and also told the young man that he had killed two motorists while driving. Both claims were false,” Burris added.

He also noted that the officer at the hospital lied to medical staff about the cause of his injuries, claiming that the boy had been in a fight.

Share:
Tags:Civil Rights SuitJohn BurrisPolice BeatingPolice MisconductStockton Police
Previous : Commentary: But Will They Pay a Price for All of This?
Next : Student Opinion: A Closer Look at the Resurgence of the 5G Conspiracy and Its Connection to Covid-19