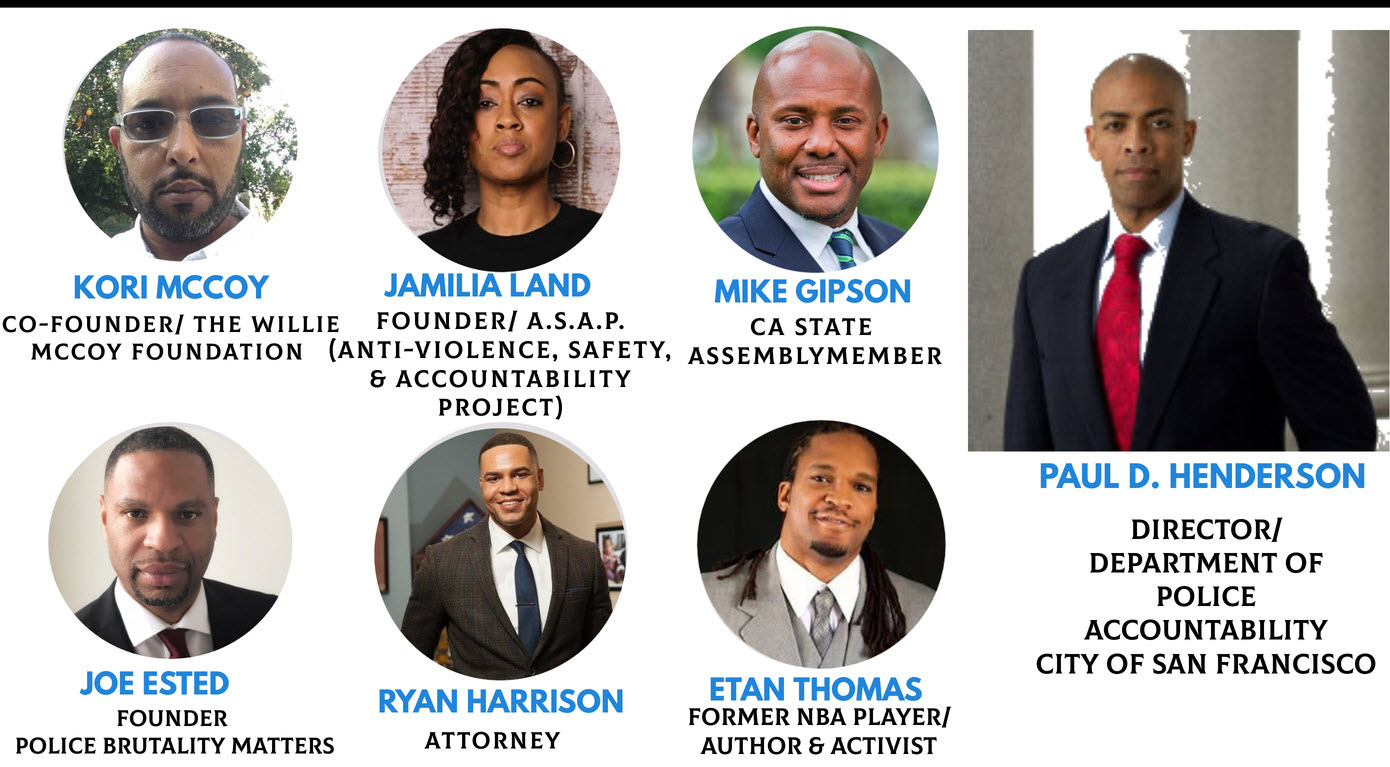 “How to Foster Trust With Law Enforcement in Communities of Color,” a three-part virtual town hall series hosted by the president of 100 Black Men of Sacramento, Richard Cornelius, works to find a solution to race equality and reinstating trust with communities of color and the police.

The panel opened with Harrison, a former student at UC Davis, and just one Black man among too many in America affected by police brutality—he was beaten by an officer “who was never disciplined” and later Harrison became a cop himself after confronting the man who beat him.

This led Harrison down the road to become an attorney and to fight for the civil rights of others who had experiences similar to him.

In relation to this week’s events of domestic terrorism at the US Capitol, Harrison claimed that “there is a double standard in America” and that “when I was a police officer it was my job to protect and defend the People’s house.”

This is not what occurred in Washington, D.C., and Harrison openly acknowledged that.

The spotlight was then turned to Mike Gipson, the chair of the Assembly Democracy Caucus, which is now addressing statewide issues such as police reform. Gipson gave a five-minute update on the happenings of the Caucus and the current state of the nation.

“What happened yesterday – it’s a slap in every person of color’s face,” said Gipson, adding, “There is no excuse for what they allowed to happen…there is still a long way for us to go…we

see what white privilege has done throughout this country.”

Gipson became increasingly passionate as he described his previous life as a former police officer until his son was shot in an act of gun violence.

“My negative encounters with police officers as a police officer … pulled me over put their foot on my neck … guns drawn, threw me in the back of the car … quickly found the badge that went along with the gun and the dynamics changed … those are the experiences African Americans have,” he stated.

He also raised the main question of the evening: “How do we restore the trust with law and the community, especially the Black community?”

Gipson’s solution was firm but demanding, arguing the community is demanding that “when you [police] are recruited that you have sensitivity and bias training.” An “increase in the educational level” will help end a “lack of real critical thinking in the process.”

One of Gipson’s main points was that the “bad apples” of law enforcement must be de-certified, noting, “If we can disbar a lawyer why can’t we do the same with officers?”

Next, Jamilia Land was introduced as “someone who protects the civil rights of African American people,” and Harrison added “When people need a voice Jamilia Land is that voice.”

Land’s role in the evening was to introduce the panelists and moderate the second half of the discussion.

She began by introducing Kori McCoy, the older brother of Willie McCoy, a young Black man killed in a Taco Bell parking lot in Vallejo after the police were called for a wellness check in February of 2019.

McCoy spoke eloquently about his brother and how he envisions the future of policing, explaining that Willie’s story got a lot of national attention, but “we need to bring attention to all the fallen sons of Vallejo,” McCoy said, noting there have been “19 lives taken” thus far in Vallejo.

McCoy proceeded to list dozens of names of youth of color that have been killed at the hands of Vallejo police, maintaining, “Learn about their stories because it’s so tragic what happened to my younger brother, his situation is just another in an epidemic of police misconduct and brutality throughout Vallejo.”

When asked about restoring trust with the police, McCoy claimed that “as an impacted family member I cannot say I will ever trust the police and that’s just being honest … based on everything I have been through.”

Rather, he added, “it’s upon the government, the powers that be, the people in charge to get the trust of the community … has to happen with action and not words.” He added ”you have to acknowledge things” and acknowledge the manipulation that police often make towards the public. “In cities like Vallejo, California, it is and has been about cover-up and corruption.

“Who’s policing the police? … the corruption has to stop somewhere,” McCoy said. “(D)on’t tell the people, show the people, actions not words.”

Paul Henderson said he came “from a low-income community and (has) struggled … deep desire to want for things to happen for my community rather than to my community.”

His mother was a public defender and through her learned that “we need change from the inside … we need leaders on the inside we need voices that make these changes.”

Henderson was the first Black intern at the District Attorney’s office many years ago, and, while it “not a welcoming place,” it was a “great place to make a difference.”

After that, he worked as a prosecutor under Vice President-elect Kamala Harris who made him her chief, together increasing diversity in the office by 50 percent. He left to work with the mayor of San Francisco where he “learned that systemic issues were institutionalized.”

Henderson thanked the moderators and said that “it’s nice to see an issue like this … is coming from people that look like my people who have had shared experiences,” adding he feels “empowered that solutions are coming from folks coming from these communities.”

When asked about trusting police, Henderson said that trust is broken because the system that is prosecuting the police is “the same system” as the police. “Benefits and privileges seep into that description,” he said.

The changes that need to be made are at a state-wide level, Henderson stressed that “legislation is so key … in addressing these reforms” and that it “has to be more than local policies.

“Independent evaluations are the best practices … problem with 21st century policing is aspirations are not institutional as it should be” and communities “should not have to rely on individual cities to do a radical movement … and then look to our neighbors.”

When presented with the common argument of some police just being “bad apples,” Henderson laughed and simply said that “it is more than being a bad apple in a system … if you’ve ever had a bad apple you don’t want an apple again … the bad apple is rotting all the apples around it.”

Land then introduced Joe Ested, who said he comes from a “low-income community,” and was “victimized by a police officer.”

He grew up anti-police because “the people who were policing my community weren’t from my community” and all he saw was violence and panic.

Ested joined the police department with the intent to benefit his own community, which ended up showing him the evil side of enforcement that he was so prone to at home, and he quickly realized that “they [police] use their authority to instill fear into the community.”

He said that the training that is given in the police academy is different than what you are told to do on the job, noting, “I’m all for more training … but why can’t we use the training from the academy?”

Ested then used the tragedy of Willie McCoy and Eric Gardner as examples, and the discussion then became very emotional.

“It never should have happened,” Ested stated. And Kori McCoy followed with, “As citizens, we have to trust what we see and trust what we hear.

“The problem with the police report is that it does not line up with what I saw … on body cam video … you can never see a gun … you hear people talking about a gun. Not in one video can you point to me that you see a gun. To expect the public to go along with the police narrative is part of the problem” and the public goes along with it “just because they are authority figures,” added McCoy.

Finally, Land introduced retired NBA player, Etan Thomas, who works to push other players to use their platforms to continue talking about these issues because “a lot of people hear” when players talk.

“Athletes are using their voices” since Kaepernick got on one knee, he said, noting that in the ’90s “athletes were quiet” and now there is a “newfound ‘wokeness’…take advantage of it…beyond a team saying, ‘Black Lives Matter.’

“We have to keep pushing because they’ll [police] do whatever they can get away with,” Thomas said, talking about the mistrust with the police by arguing that mental health organizations should be called instead of the police when the scene does not involve violence and weapons.

The death of Willie McCoy was referenced again.

“That call should have never been made to the police,” Thomas argued. “Police are not trained to handle wellness checks … if a different organization was called that had proper training, it would have been a different [outcome].”

Alana Bleimann is a junior at the University of San Francisco majoring in Sociology with a minor in Criminal Justice Studies. She is from Raleigh, North Carolina.