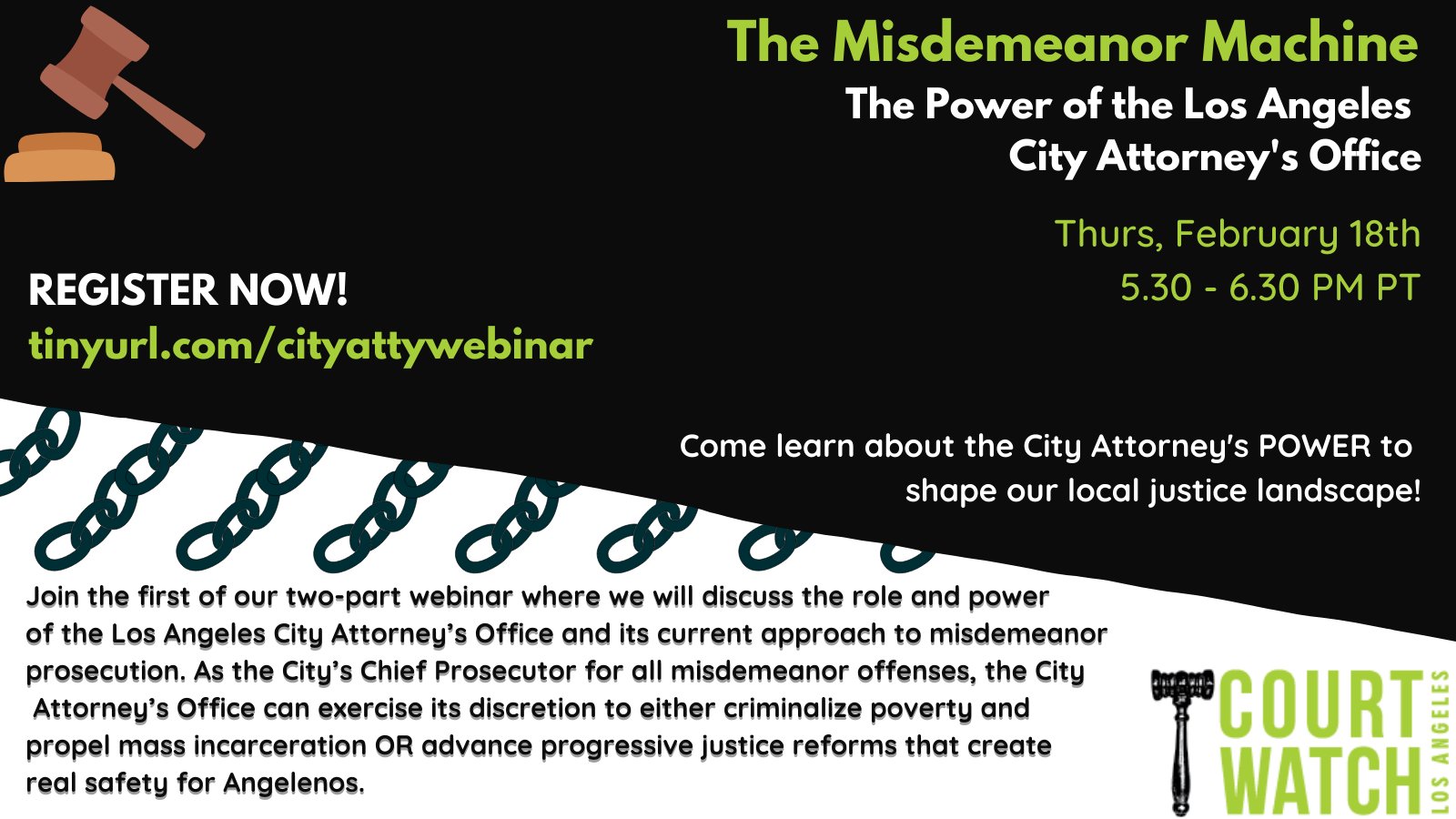 LOS ANGELES — Many people have underestimated the power of the Los Angeles City Attorney’s Office for years, allowing it to run rampant with litigation which disproportionately affects underrepresented groups such as houseless communities and impoverished people.

According to Court Watch Los Angeles (Court Watch LA), the Los Angeles City Attorney has been working under the radar for years and lacks accountability and transparency. However, Court Watch LA hopes to change this in the upcoming election in 2022.

Court Watch LA’s ultimate goal is to raise accountability and transparency within the court system. With the panel, they hoped to share more about this office in order to show Angelenos how important it is to participate in and influence future elections.

The panel opened with a speaker from KTown for All, Mike Dickerson. Dickerson described that the City Attorney’s Office has a lot of authority over criminal function, especially when it comes to citations and administrative fees, which criminalize communities such as street vendors and unhoused people.

Dickerson explained that the city does have control over landlords and businesses which is necessary in order to function. “But, those same things can also be harmful, right? These rules can be applied in a really discriminatory manner,” said Dickerson, noting that some laws have been disproportionately harmful to underrepresented communities.

Dickerson went on to list the qualities required for a progressive attorney, reinforcing the idea that progressivism is demonstrated most importantly through how citations are dealt with. For example, there are many rules which directly target homelessness, or low income people in general—such as rules that dictate when tents can be up and zones that prohibit people from living in a vehicle.

“Instead of taking punitive actions we want to clear those citations. And so, in practice, what that looks like is creating programs,” said Dickerson.

Currently, these fees are required to be paid in full in a limited amount of time. The low-income people that these fines are targeted against cannot afford to pay such sums. If not paid in full, they also often result in jail time.

Dickerson explained that this creates a cycle in which fees are paid or jail time is served, but the actual cause of the problem is not addressed and continues to burden the same people. Dickerson proposes creating programs that would eliminate the citation process overall.

Kenneth Mejia reiterated the amount of power that the City Attorney has based on the City Attorney’s Office budget and their connection to the LAPD. Because what the LAPD does feeds directly into what the city attorney does, he feels that the two departments are inextricably linked.

Court Watch LA echoed this statement by stating that over 60 percent of prosecutions done at the City Attorney’s Office come directly from the LAPD, which exhibits a direct link between the two departments and how they are criminalizing poverty, homelessness and mental health issues.

In contrast, programs such as transportation only receive about $300 million a year in overall funding, which shows the great amount of financial support that the Attorney’s Office receives in order to disproportionately penalize marginalized groups rather than help them through programs such as public transportation.

The Court Watch LA panel emphasized that it is important to have a progressive approach to the City Attorney Office in order to prevent the criminalization of poverty; however, the city of Los Angeles currently has a regressive approach.

To conclude the panel, two practicing attorneys, Mary Ray and Rosemary McClure spoke about the negative impact of the power that the LA City Attorney’s Office has on marginalized groups, especially due to the great amount of discretion they have in the cases the office chooses to prosecute and the setting of bail.

“As the City’s Chief Prosecutor for all misdemeanor offenses, the City Attorney’s Office can exercise its discretion to either criminalize poverty and propel mass incarceration OR advance progressive justice reforms that create real safety for Angelenos,” said Rebecca Brown, the panel’s moderator.

“Their job is to represent the people of the state of California, if a crime is committed they have a duty as lawyers to file a case if they believe that a crime has been committed. However, they can find other avenues to right that wrong, like diversion, office hearings. They also have the power to not enforce certain crimes because of policy reasons. They seem to have unbridled discretion [in deciding not to file charges] when it’s a police officer who’s been arrested… they always get office hearings,” said Mary Ray.

The panel was closed with McClure claiming that the system is retributive, and unwilling to take the defendant’s wishes into account.

The panel wanted to reinforce the idea that a lack of oversight and accountability led to the criminalization of poverty, houselessness and these mental illnesses. In order to decriminalize positions, they encourage more people to vote for the LA City Attorney’s Office in the upcoming election in 2022 in order to replace the current administration and achieve any kind of progress.