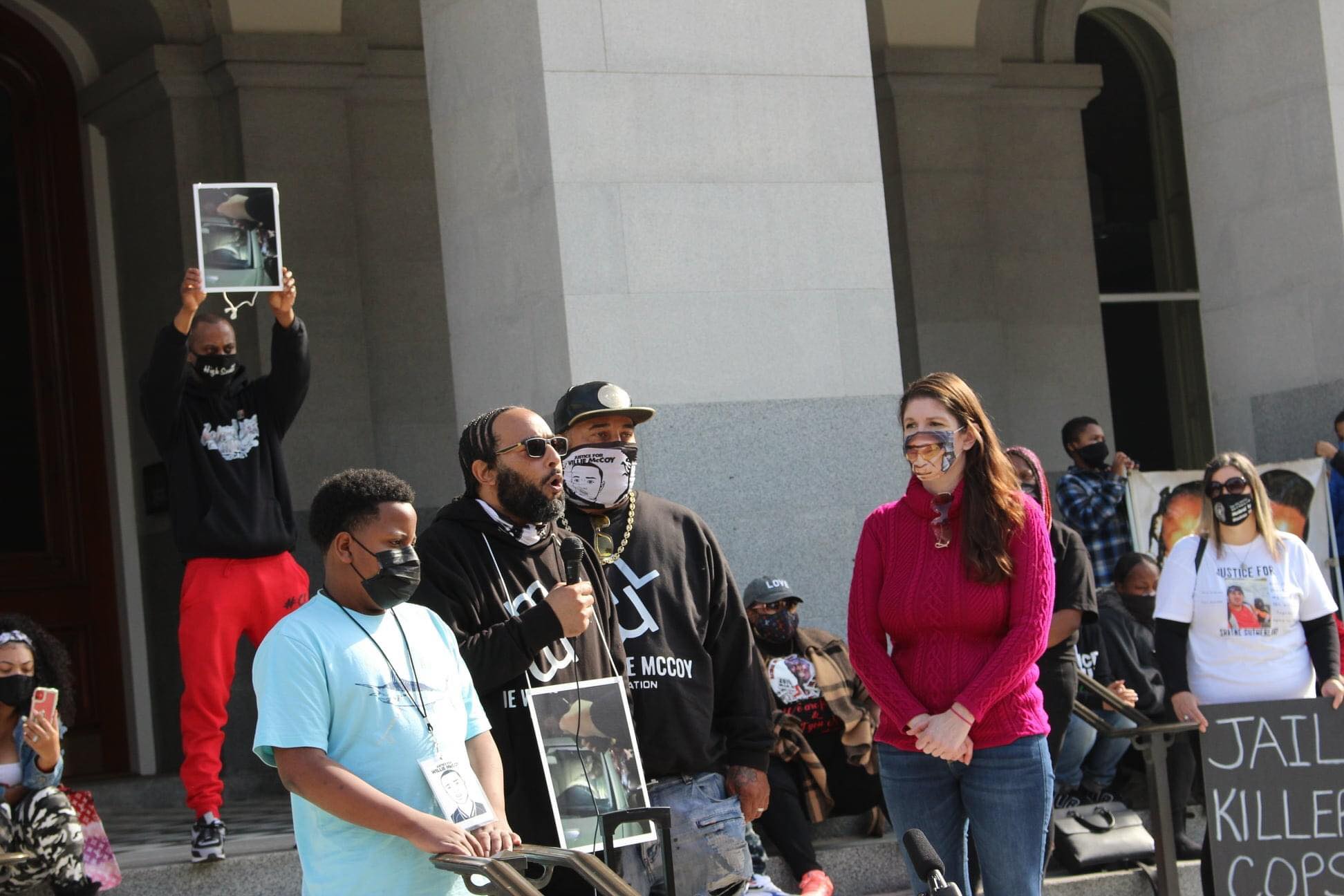 Earlier this week, a group of supporters of Willie McCoy rallied in Sacramento and pushed for a number of changes, on the two-year anniversary of the death of the man, shot by Vallejo police as he slept in his vehicle at a local drive-through.

“The rally marks the two-year anniversary of my brother’s murder and we will not stop until the corrupt Vallejo Police Department roots out every officer and command staff member that was involved in the badge bending ritual and subsequent coverup,” said Kori McCoy, brother of Willie McCoy and Co-Founder of the Willie McCoy Foundation.

It was February 9, 2019, when McCoy, 20, was shot and killed by several members of the Vallejo Police Department, after he fell asleep in a Taco Bell drive-through.

Like many such police shootings, nearly two years later, none of the officers “have been disciplined, terminated, or charged for their overt negligence and unlawful use of deadly force against a sleeping man.”

But as a letter to legislators notes, “local media outlet ‘Open Vallejo’ recently revealed that the officers involved in Willie McCoy’s execution engaged in a gang culture ritual after killing

Willie. The officers bent the tips of their badges and celebrated with private gatherings to commemorate killing Willie McCoy and other prior victims.”

The outlet found that more than a dozen current Vallejo Police Officers engaged in the practice of badge bending to mark their “kills.”

The letter further notes that “supervisory Vallejo Police Sergeants on duty that night did not respond to the scene until after Willie was shot and killed, because they were watching Netflix, in dereliction of their duties.”

Outraged by these revelations, Captain Whitney, who was the second highest-ranking member of the Vallejo Police Department at the time, “reported this overt misconduct and clear motive for Murder” to, among others, former Vallejo Police Chief Andrew Bidou, former Vallejo Mayor Bob Sampayan, former City Attorney Claudia Quintana and Vallejo City Manager Greg Nyhoff.

While the Chief promised to investigate, the letter and an accompanying complaint filed with Solano County Superior Court alleges that “instead of investigating and terminating the involved officers, Chief Bidou gathered the officers who had bent badges and told them to get them repaired on their own, so that there would not be any invoices or evidence of their ritual. Chief Bidou took no further action to stop this practice after (he) directed officers to repair and conceal evidence of their criminal conduct.”

The letter continues to assert that, instead of disciplining the officers “involved in the gang culture badge bending ritual,” they were not “disciplined or terminated for bending their badges to commemorate killing human beings and it appears the incident was not documented by the department.”  Instead, Chief Bidou fired Captain Whitney in retaliation for his efforts to report corruption in his department.

The letter argues: “The corruption exposed in the Captain Whitney lawsuit is not an isolated incident and provides credence to the countless allegations of misconduct against the Vallejo Police Department which have been recurring for decades.”

Among the other incidents highlighted in the letter:

A whistleblower complaint was filed by the Alison Berry Wilkinson Law Group based out of San Rafael on behalf of former Police Captain John Whitney.

It alleges that when Captain Whitney “protested and reported unlawful, unethical, and corrupt behavior, his efforts to professionalize the Vallejo Police Department were spurned, and he was punished for his whistleblowing activities.”

Rather than reward the Captain’s “efforts to ensure professional policing for the betterment of the community, an excuse to terminate (him) was craft(ed) and the city unilaterally refused to permit him to use the mandated review processes that would have revealed it was a sham.”

Whitney was a 23-year veteran of law enforcement and served Vallejo Police with distinction, being promoted through the ranks to Captain after having begun his career in 1996 at the Alameda County Sheriff’s Office.

In December 2018, the Chief learned that he was keeping notes about things occurring in the workplace, in addition to maintaining emails and other evidence “of the toxic environment that the Chief was fostering.”

The Chief ordered Captain Whitney “to regularly delete his emails and text messages at least weekly, if not more often. At that time, Chief Bidou also inspected Captain Whitney’s department-issued cell phone to make sure it was set to delete all texts.”

Captain Whitney reportedly “followed that order only because he had been informed that all the texts and emails he sent and received in his position were preserved on the City server and in backups, and therefore could not be permanently erased.”

In January 2019, “Captain Whitney reported to the City Manager that there was a toxic environment at the police department, which did not support Captain Whitney’s desire to perform at his highest level and was fostering an environment where he could not express his honest opinion without fear of retaliation.”

According to the complaint, “Within weeks of Whitney reporting mismanagement of the department to the City Manager and the Mayor, Chief Bidou ordered an investigation into Captain Whitney.”

By the end of May 2019, Captain Whitney was advised “that he was being placed on administrative leave for having engaged in a ‘tactically inappropriate’ conversation with the Mayor.”

There were two internal leaks that resulted in Public Records Requests, and an investigation was initiated into whether Captain Whitney was the source of the leak, but the allegation was found to be not sustained.

“Nonetheless, on August 26, 2019, the Police Department summarily terminated Captain Whitney’s employment,” the complaint says.  “Captain Whitney was informed that the reason for the termination was his allegedly having deleted personal content from his department-owned cell phone before turning it in for inspection.”

With the failure of local leaderships in Vallejo getting to the root of these problems, the Willie McCoy foundation in their letter to the legislature requested legislators, “contact State Attorney General Becerra and Acting U.S. Attorney General Wilkinson and urge them to open a criminal investigation into the Vallejo Police Department badge bending corruption scandal.”

The AG’s office is already investigating the possible destruction of evidence in the 2020 Monterrosa shooting, but the letter further urges them to “demand that the Attorney General open a criminal investigation into the badge bending rituals. It is unprecedented to have an active member of a law enforcement agency prepared to testify about sickening murder rituals, dereliction of duties and a subsequent coverup by the Chief of Police.”

They note: “Captain Whitney is now a member of another local law enforcement agency. It should be noted that former Mayor of Vallejo, Bob Sampayan, wrote a letter of recommendation for Captain Whitney’s current employer, which recited the Mayor’s belief that Captain Whitney was terminated for trying to expose misconduct.”

They add, “At this point, anyone who is not actively urging both Attorney Generals to immediately initiate a criminal investigation is complicit in this ongoing corruption.”