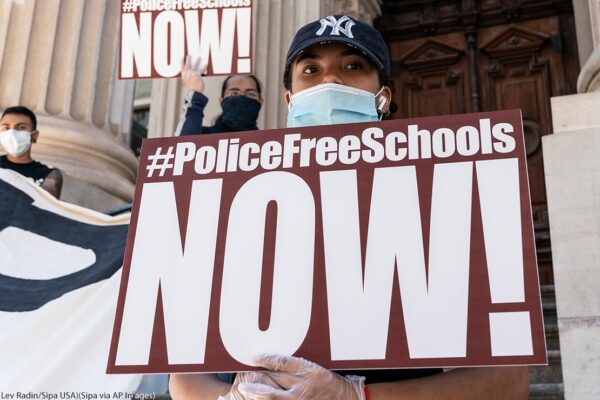 To advance racial equity and disability justice, Biden must end federal funding of police in schools.

Over 150,000 Black and Brown children, disproportionately children with disabilities, are handcuffed, restrained, referred to law enforcement, and arrested in schools across the nation each year. Placing police in our schools perpetuates a chilling pattern of racial and disability discrimination that endangers and traumatizes our children and funnels them into the school to prison pipeline. School policing is a threat to our students’ civil rights and to their right to learn in safe and supportive school environments. This is why we’re calling on President Biden to stop policing our students by ending federal funding of police in schools.

Today, we sent a letter to President Biden with more than 150 organizations and individuals — including the Dignity in Schools Campaign, National Urban League, UnidosUS, YWCA USA, and the National Disability Rights Network, among others — calling on Biden to issue an executive order eliminating federal funding of police in schools and to work with Congress toward this goal. There are currently 14 million students in schools with police and no nurses, social workers, or psychologists. Instead of pouring money into law enforcement, President Biden must redirect the additional $300 million designated for community policing — which often goes into placing police in schools — and invest it in our communities. This money should be spent on community-led and community-centered safety strategies and getting more counselors and other supportive school staff, not cops, into our schools.

School districts across the country receive federal funding from the Department of Justice to hire police for their schools. Police in schools do what they are trained to do — detain,

handcuff, and arrest — and students of color and students with disabilities are often the ones who pay the price.

In Osceola County, Florida, a school police officer body-slammed Taylor Bracey, a 16-year-old Black girl, to the concrete ground as she was walking down the school hallway. She was knocked unconscious and experienced a concussion, and now has memory loss and other traumas.

In San Antonio, Texas, a 7-year-old Latino boy with autism had an outburst during class at his elementary school. What was the school police officer’s response? He handcuffed the crying child, put him into a patrol vehicle, and drove him to emergency detention at a behavioral hospital.

In response, we’ve seen communities across the country pushing their schools to divest funding from police and reinvest those funds in student mental health care and other supportive services. Several school boards and cities across the country have already decided that police no longer belong in their schools. For example, a large district in Oakland, California eliminated its school police department following strong community-led advocacy, and committed to a community-driven process to develop an alternative safety plan that would include funds for mental health professionals and other staff to support all students of color. In Portland, Oregon, smaller districts redirected its school police funding to hire more counselors, social workers, and other direct student supports. However, far too many other localities continue to use police in schools, despite the demands of students, parents, and community members.

President Biden has an important part to play to stop the policing of our students. Federal funding plays a key role. It is a core reason so many Black and Brown communities have police regularly stationed in their schools. The DOJ’s COPS Office awarded $50 million to 160 school districts and municipalities for school police in 2020 alone. While municipal governments and state legislatures have a role in keeping our students safe from police violence and trauma, President Biden should lead from Washington, D.C.

This is a unique opportunity for President Biden to uphold his administration’s promise to advance racial equity, redress harm to children with disabilities, and set a strong example for our nation’s schools. The time to invest in policing has passed. It is now time to invest in our students.

West Resendes is a Skadden Fellow.  Article originally published by the ACLU.

Share:
Tags:ACLURacial DisparitiesSchool Policing
Previous : Letter: My Brother Angelo Quinto’s Death and Common Sense Reform
Next : My View: Reisig Finds Himself on the Wrong Side of History and the Law Yet Again