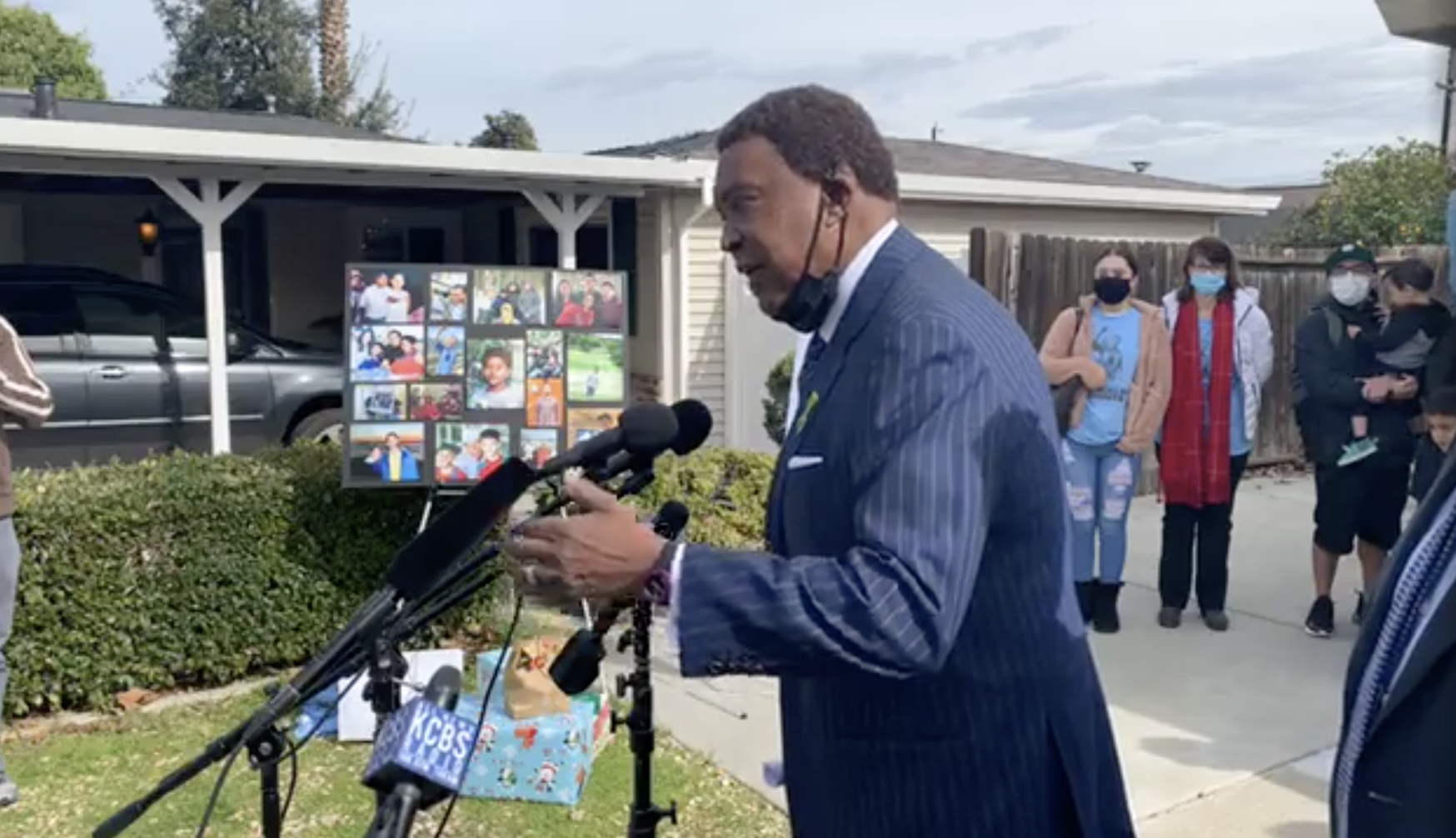 ANTIOCH, CA – Another horrific police killing was the focus of a news conference here Thursday, the result of a family’s call for mental health help that ended with a “George Floyd” type death of an unarmed person of color.

Attorneys John Burris and Ben Nisenbaum disclosed details of their legal claims against the Antioch police for the murder of Angelo Quinto, and were joined by the grieving Quinto family and community supporters.

The civil rights team described the incident, played phone recordings from eye witnesses, and gave the Quinto family and community supporters an opportunity to speak.

A large collage of smiling Angelo pictures stood in the background, along with a pile of colorfully wrapped Christmas presents he never got to open.

The incident took place on this past Dec. 23, two days before Christmas.

Angelo Quinto, a 30-year-old Filipino with a history of mental impairment, apparently had a mental health emergency, and was being held by his mother, Maria Quinto-Collins.

According to attorneys, his sister Isabela – worried her brother might hurt their mother in his condition – called 911. Although the police had been called about a month prior to assist Angelo with a previous mental health emergency at the family’s residence, they

responded to Isabella’s call with immediate force, the family said.

The law firm, in a press statement, said the police grabbed Angelo from his mother’s arms and slammed him to the floor.

One police officer then drove his knee onto the back of Angelo’s neck while another officer shoved Angelo’s legs up and backwards towards his back for an extended period of time, resulting in his death.

Angelo’s mother and sister witnessed him beg for his life repeating, “Please don’t kill me,” as blood poured from his mouth.

Angelo was taken to a hospital but never regained consciousness and was pronounced dead three days later. A toxicology report showed no drugs in his system.

Although the officers were not wearing body cameras, his mother and sister managed to record the incident from their phones.

Maria Quinto-Collins said, “I was horrified to see my son snatched from my arms without warning, taken down on my bedroom floor, and brutally killed in front of my eyes.”

Attorney Burris said he was particularly disturbed that there was no effort to “talk with him before using force.”

“These Antioch police officers had already handcuffed Angelo but did not stop their assault on the young man and inexplicitly began using the ‘George Floyd’ technique of placing a knee on the back and side of his neck, ignoring Mr. Quinto pleas of ‘please don’t kill me,’ said Burris.

“This horrific incident provides a haunting reminder that a seemingly minor call for help from the police can have deadly consequences for the person in need of help when the police use force first without verbally assessing the situation. It’s a sad commentary on policing when a call for help results in death for the person needing help,” said Burris.

“Weight force to the back and the neck of a person restrained in a prone position can cause asphyxiation, and every officer is trained to avoid doing that,” attorney Nisenbaum said.

He added, “Mr. Quinto only needed mental health help, and these officers killed him when he was no threat to anyone. Any officer involved in his death should not be a police officer.”

The names of the officers and the police records still have not been released to the attorneys. The Antioch police have not disclosed any information about the incident. “It’s suspicious,” said Nisenbaum.

Isabella, who made the 911 call, was the first to speak at the press conference after the attorneys.

“My mom and I trusted [the police] too much… I want to bring [Angelo] back, but if we can’t do that, we want justice in any way we can get it. We want a new number to call, someone who can help us with mental health crises and other related domestic incidents,” she said.

Angelo’s father spoke next, talking about his son’s passions and fond memories, such as Angelo’s habit of always introducing his family to new video games and the time he adopted a two-week old cat from a dumpster.

Angelo’s father stated, “He had a lot to live for. You know, when Isabella called 911 she was looking for help. She had no idea that she was engaging in a system that’s broken and unable to regulate itself and investigate itself.”

He added, “Ultimately Angelo’s life would be lost in vain if we could not work towards some reform so that others should not have to face a similar situation.”

Attorney Burris and Nisenbaum ended the conference with an old video of Angelo excitedly talking about pursuing a career in the navy. A future he will never see.

“These officers violated basic training standards in how to restrain a person without killing them,” Nisenbaum said. “Weight force to the back and the neck of a person restrained in a prone position can cause asphyxiation, and every officer is trained to avoid doing that. There are countless examples of police killing people this way. But these officers appear to have done exactly what they were trained not to do.

The attorneys said they were troubled by the officers’ comments at the scene, after they finished restraining Quinto, including the statement caught on his mother’s cell phone video: “Is he sleeping?” when it was obvious that Quinto was not moving and required medical help.