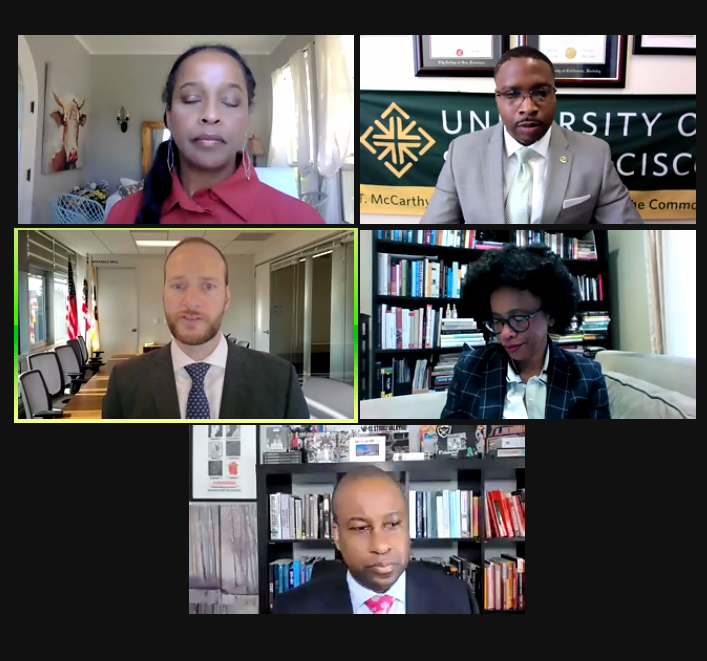 SAN FRANCISCO – Professors and students from The University of San Francisco gathered virtually here to lead a discussion with SF District Attorney Chesa Boudin about how to properly hold police on and off-campus accountable for historically targeting people of color in the city.

With the focus centered around the current state of race and policing in the United States, and the movement to shape public safety policy, the panel opened with SFDA Boudin stating that he hoped that his office can examine the systems that are at play for forces that uphold racial discrimination.

“Race and policing are inextricably linked”, Boudin began, noting that many academics have done the work of tracing modern-day police departments and their practices to the formation of slavery. And that the legacy of slavery lives on in the form of racial disparities that we see at the state and local levels across the country today.

Boudin confirmed that many low-income communities of color are areas where we see both over and under-policing, depending on the neighborhood; however, regardless, this tends to result in “more arrests, fees, and destruction of local life.”

This is further exacerbated by communities of color not feeling safe with law enforcement, and a lack of justifiable trust – the idea that was at the heart of the webinar.

Over the years, Boudin explained, certain kinds of policing policies that have disproportionately and negatively affected communities of color, such as broken windows policing or stop and frisk policies that explicitly target young people of color.

Not only does this incur damage to the trust for law enforcement and the government broadly, but also allows communities of color to suffer from incidences of poverty, untreated health issues, lack of access to employment, among others, he added.

Boudin attributed these issues to systemic oppression and problems, in which “it is not just the police, it is also prosecutors, judges, legislators, and the criminal justice system more broadly.” He said numbers show the disproportionate impact of the current approach to enforcing laws in Black communities.

In San Francisco specifically, Black children represent about 32 percent of children arrested, with 42 percent detained, even though they are only 12 percent of the neighborhood population.

Boudin also presented a report and data on traffic stops in the City, in which communities of color were more likely to be stopped and searched.

Additionally, he stated that his office started to look for ways to drive anti-racist policy change in the office from day one, out of which one of the policies he implemented was not charging contraband cases stemming from traffic stops.

Boudin ensured that his office will not be complicit in policies and practices that lead to the use of excessive force, which inevitably lead to the erosion of trust between Black and Brown communities and law enforcement.

Erosion of trust was cited as one of the larger problems by Boudin, especially in relation to solving cases.

Boudin explained that many people do not want to speak to the police or his office, because the office’s ability is hindered to successfully prosecute certain cases.

In the wake of the murder of George Floyd, Breonna Taylor, and many others, Boudin and his office were proactive in thinking about identifying ways in which prosecutors can play a role in rebuilding trust and enforcing laws more equally, “even if it means prosecuting the police when they violate the law.”

Because of this, Boudin made changes to his independent investigation bureau, in which the office investigates and prosecutes officers involved in officer misconduct.

The office also worked with San Francisco law enforcement agencies from hiring officers with the history of civil misconduct. In doing so, Boudin wants “someone in uniform that meets our highest standards, the standards that we deserve as a city.”

He said recognition that police accountability isn’t solely about prosecuting police, but it also entails supporting victims of violence, was also true.

One of the policies that Boudin’s office has implemented in the need to provide support for individuals who were harmed at the hands of police, is providing help to pay for medical expenses and funeral costs-the same as is done for any victim of crime or any other person who suffers from violence.

Boudin acknowledged that nobody should have to rely on a GoFundMe page to simply cover burial and material costs, and that “that is something we can do as a state and we are doing it here in San Francisco.”

Boudin also commented on the national conversations surrounding the defunding of law enforcement, which upon speaking to Police Chief Scott, he stated that he was open to considering these types of policies.

Boudin explained his perspective on how to be effective with tax dollars, and the fact that “we are currently asking too much of the police, and it is distracting them from their core function.”

In San Francisco, Boudin stated that “we could divert 400,000 non-serious calls away from law enforcement, which would reduce the budget by somewhere near $100 million.”

In order to do this, Boudin said the City has to remain creative in investing tax dollars, in not asking police officers to do a job that is impossible to do.

He ended his opening statement, saying that we need to take “concrete action to address systematic racism that affects not just policing, but every area of society: education, employment, healthcare, housing, and etc.”

Boudin passed it onto other speakers after stressing making efforts to unify communities and prevent crime from happening in the first place.

Author of Inner Work of Racial Justice and a professor at the University of San Francisco, Rhonda V. Magee echoed Boudin’s claims of racism impacting everyone, especially when a culture of hypervisibility exists for Black and Brown people.

“We really do need prosecutorial reform of the sort that our DA’s office is naming,” she stated clearly.

Magee further emphasized that “we are in an era of weaponized racism and disinformation,” which further exacerbates the inability to invest in accountability structures that minimize the abuse of power.

Associate professor at the University of San Francisco, Darrick Smith, then spoke about his own personal experiences with law enforcement and how he is interested in police reform from “a community with the strong history of cross-cultural solidarity and love for humanity.”

Smith felt grateful “to hear about what San Francisco is doing through your [Boudin’s] work.”

In reimagining police reform, Smith argued that accountability towards police officers is an important factor, especially in relation to the power and consequences that their actions have on the community.

The culture of policing is a key factor which reflects the history of the police that was formed under a highly racialized period, which Smith regarded as the difference in norms, values, languages, and behaviors that conflicts with policing.

According to Smith, the police have learned these biases in their childhoods, not from the training itself.

He states that, “asking an American to unlearn racism…has to be an invested long-term process, it’s like asking a person to unlearn English.”

Derick Brown, the senior director of the McCarthy Center for the Common Good, further traced the roots of the intersection in between race and policing to the origins of the nation.

Brown visualized a space where “our communities actively participate in shaping what public safety even looks like,” which we can accomplish by listening to the voices of our communities and working to understand their lived experiences.

Similar to what Boudin had contended, Brown agreed that “this issue is not something that can be solved in one day and alone; this is going to take work and it has to be done together.”

The webinar ended with words of hope from Boudin who encouraged listeners that his office is striving towards justice every day.

He acknowledged that his office alone can only do so much as there are multiple ways to address the important issues at hand.

“There are real limits structurally to what each of us does in our own capacity,” Boudin explained, noting the DA’s office has no control in the police processes of hiring, training, and discipline.

In reality, Boudin can communicate with the SFPD, but cannot actually do anything about training specifically, even though he knows the issue of training needs to be addressed.

“I see the problems. But in terms of my direct level of power…they are narrow and more limited,” Boudin ended.

Share:
Tags:Chesa BoudinPolicingSan Francisco District Attorney
Previous : 2021 SacHacks Announces Project Winners During Closing Ceremony
Next : How Much Is Too Much? Prosecution Convinces Judge Defendant Not Only Used Meth, but Sold It