While the data is more difficult to parse then you might think, in part because the huge percentage of students who live in Davis likely drag down the median income, the cost of housing is clearly a problem.

A recent study examined data for around 592.  In order to determine the affordability of home purchases, they used the average home price data for each city for homes with between one and five

bedrooms, and then they used census data to determine “the distribution of households in homes of different sizes for each city and combined this data with the home price data” this allowed them to create a weighted average housing price for each city.

It is an imperfect measure to be sure, but then again, it gives us a ballpark figure of comparing actual cost by indexing the home price to median income.

The result—a whole bunch of cities in California are really expensive.  Davis is one of them.

“The most affordable homes were mainly found in small and midsize midwestern cities, with a sprinkling of southern cities as well,” the study found.

On the other hand, Palo Alto, to no one’s surprise is the nation’s most expensive city with the five least affordable in California: “with Palo Alto, Newport Beach, Santa Monica, Santa Barbara, and Berkeley leading the way.”

They broke the list down by small, midsize and large cities. 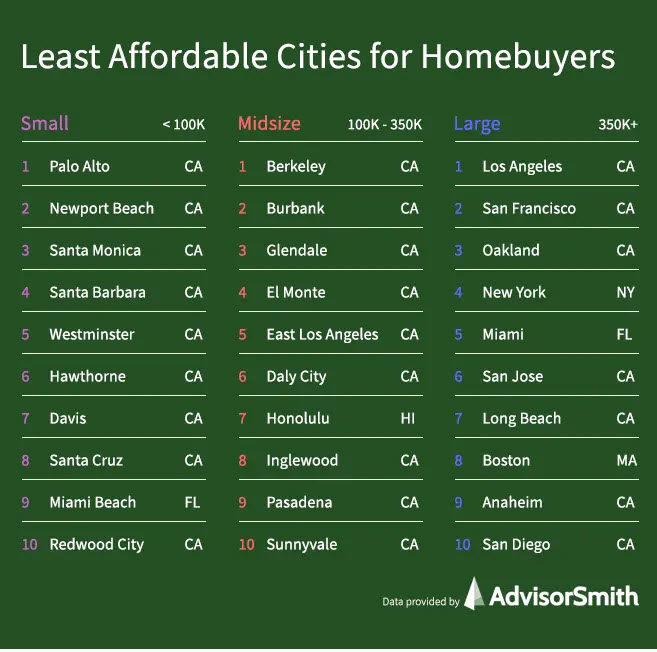 On the small cities list, Davis checks in at No.7 and 9 of the 10 cities on the list are from California, with only Miami Beach (not to be confused with Miami which makes the large city list at No.5) not from California.

In fact, of the 30 cities list in the three lists, a whopping 25 are in California.  The exceptions: Miami Beach, Honolulu, New York, Miami, and Boston. 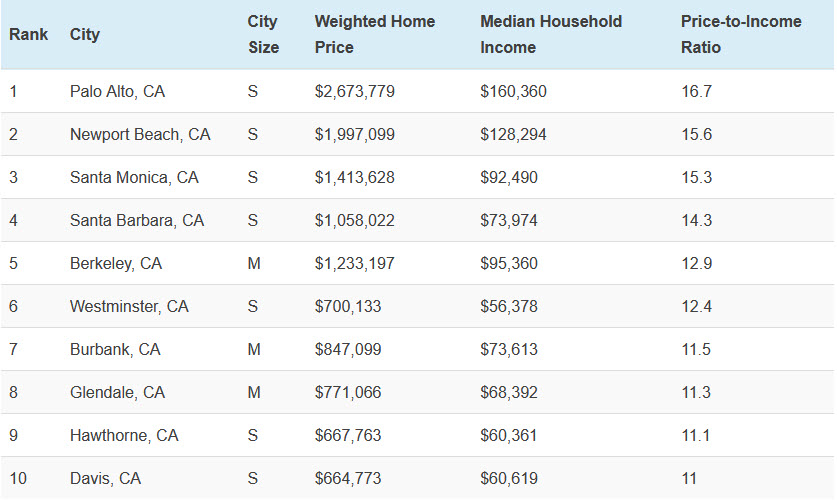 The data looks reasonable for Davis—the 10th least affordable city overall.  Average home price of $664,773 with a median household income of $60,619.  While that is clearly weighted down somewhat by students, it is notable that college towns, while present, aren’t dominating the list—Palo Alto, Santa Barbara and Berkeley join Davis on the list, but a number of non-college towns like Newport Beach and Santa Monica are also prevalent.

One key factor here: while Davis has nowhere near the median home price of the top 5 on the list, all of which top $1 million with the exception of Santa Barbara, median income is far less as well.  Even if you want to argue that is weighted down by students, that data is likely fairly accurate.

In a sense, this may be worse because a lot of the homeowners in Davis purchased their homes when housing costs were far lower in the 80s and early 90s.  Housing in Davis may be less affordable than these metrics would suggest.

None of this of course is surprising.  But it does factor into points we have been raising over the last week concerning affordability of housing and the shrinking middle in Davis—families and middle age (30-55) and middle income people in this community.  All of this should help to focus the conversation over the next Housing Element and General Plan.

But while there is a huge focus here on housing, the picture here is not just housing but jobs to housing, and the lack of high paying, private sector jobs to complement the university.  All of this should be a focus of discussion and concern, but hasn’t been.

Share:
Tags:HousingHousing Costs
Previous : Manhattan DA Vance Is Leaving the Office after Three Terms; While He Touts His Record of Reform, Critics Look for Someone with a Bolder Vision
Next : Student Opinion: Roblox Goes Public as Pandemic Gaming Market Balloons

27 thoughts on “Commentary: One Study Finds Davis Among the 10 Least Affordable Small Cities in the Nation”