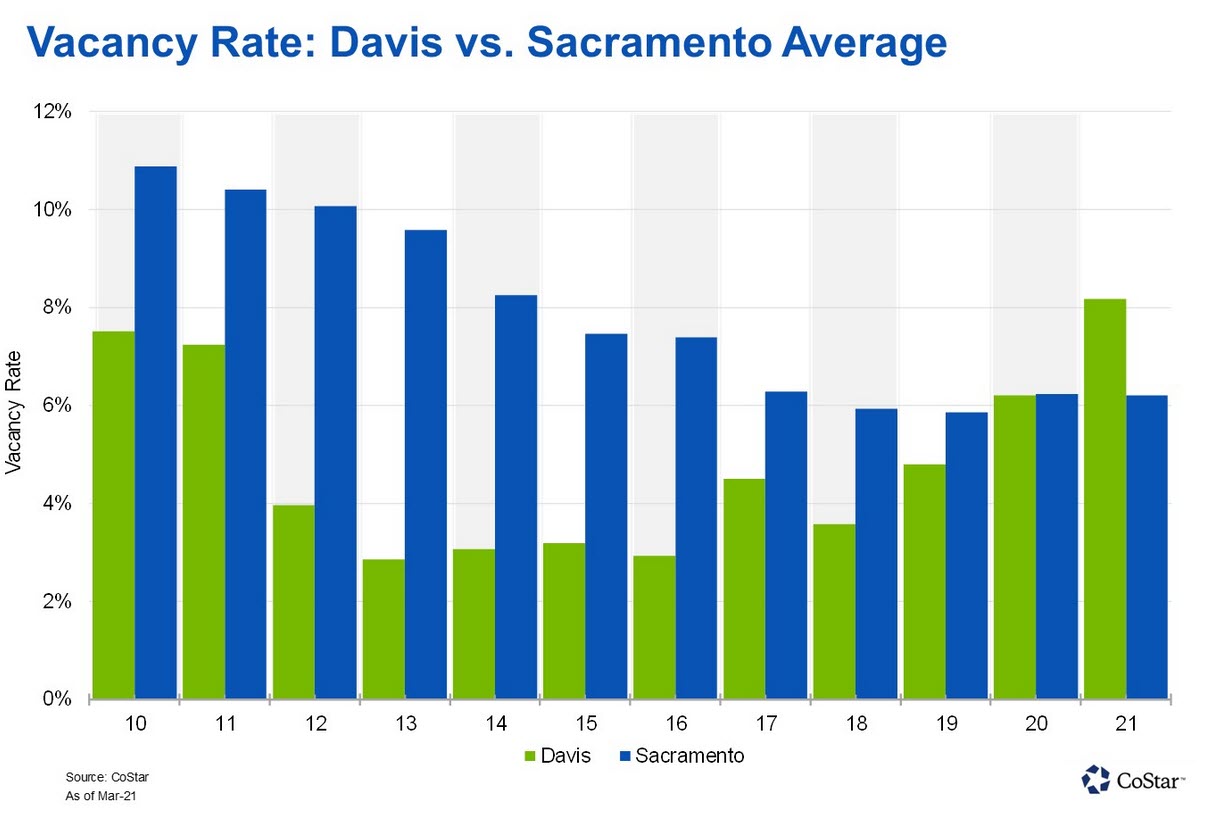 Davis, CA – Someone shared with me a CoStar Analytics report that looked at Davis’ retail vacancy rate compared to the Sacramento average.  It shows the retail vacancy rate, which had been under 4 percent from 2012 until 2017, soaring to over 8 percent—the first time it passed the regional average in at least a decade.

“The Sacramento retail market has proven remarkably resilient during the ongoing coronavirus pandemic, but one area that has been inordinately impacted by the resulting economic turmoil is Davis, California,” writes David Whitmore of CoStar Analytics.

“Since the first quarter of 2020, vacancy rates in the Davis retail submarket have increased by 120 basis points to 7.7%, an all-time high,” the report notes.  The previous peak was back in 2010 at 7.5% during the height of the Great Recession.

Historically, just like the city’s rental market for residential apartments, the retail vacancy market has been tight.  They attribute it to the presence of UC Davis, but perhaps limited commercial space has also played a role.

“It is notoriously difficult to gain development approvals for new properties in the city of Davis,” CoStar notes.  “As a result, the average retail vacancy rate in Davis during the past decade was 4.4%, while Sacramento’s average figure was almost double that, at 8.5%.”

The CoStar report notes that, since the start of the pandemic, UC Davis has limited on-campus instruction, which has led to a large reduction in the number of students in Davis.

“Apartment vacancies in Davis have similarly soared to an all-time high, indicating students have opted to live with family, cohabitate with friends, or live in a more cost-effective area. Davis’

apartment market is easily the most expensive in Sacramento,” they note.

They added that “this flight of student renters has clearly impacted local retail operators. Before the pandemic, vacancies in Davis had never exceeded the market average.”

But some of this figures to be quite temporary.  With vaccines and reduction in cases, UC Davis right now says they will resume full in-person fall instruction by September.  If that’s the case, the rental market and apartment vacancies figure to return to normal.

But examining the chart I noticed something not covered in the Co-Star report.

So a key question is whether this is a pandemic-driven aberration, in which case we would expect things to rebound once the pandemic ends and the students return.  Or whether this is the continuation of or exacerbation of a new and disturbing trend.

We note some long time businesses, including restaurants, are now gone and probably not coming back.  Of note, the loss of Bistro 33 in the large historic old City Hall.  What will become of that space with the loss of that business?

There were some downtown vacancies as the result of the sale of the Brinley Building and the loss of some longtime businesses there.  Davis Commons saw key businesses leave.  University Mall was largely shut down.

It will be interesting to see what happens.  The University Mall is going to undergo an immense redevelopment.  That will take a lot of those spaces offline for a sizable period of time but ultimately the city hopes it will revitalize it.

Then there is the Downtown Plan.  COVID has devastated business in the downtown.  Will the end of COVID combined with efforts to redevelopment spur new retail?

There has also been the slow loss of retail in the core, replaced with restaurants and other entertainment.

Overall, it will be interesting to monitor.  Are we seeing a momentary blip or did COVID merely accelerate an existing trend?

29 thoughts on “Commentary: Retail Vacancies – Ominous Sign or Just an Artifact of the Pandemic?”