FREMONT, CA – Judge Jason Clay here in Alameda County Superior Court last week was noticeably upset when multiple defendants stated that they did not book themselves or contact the public defender’s office for representation since their last hearing.

“I can make this very easy and make them come to you in custody,” Judge Jason Clay of Alameda superior court told a number of defendants in his courtroom, threatening to put them in jail.

Various defendants expressed to the judge that they were unable to contact the Alameda County Public Defender’s Office (PD), due to reasons ranging from health issues, a lack of response from the phone line, and overall problems caused by the pandemic.

After a pattern began to emerge with defendants failing to comply with Judge Clay’s orders, frustration morphed into a readiness to threaten defendants with time in custody.

When asked by Judge Clay why he failed to contact the PD  in lieu of providing his own private counsel, defendant Matthew Casarez revealed to the Court that he has been in conflict with his insurance company over surgery costs for the past month and was therefore unable to get in contact with the PD  in the time frame allotted by Judge Clay.

“What does that have to do with picking up the phone and speaking to a public defender?” asked Judge Clay after Casarez mentioned his insurance and health complications as reasons why he failed to complete the Judge’s orders.

A second defendant — Treshawn Rentie — admitted his confusion around having to contact the PD. Rentie said that he was unaware that he had to call the PD  if he could not provide his own counsel, noting, “I don’t remember being asked to contact the public defender.”

With defendant charges ranging from carrying a concealed firearm to reckless driving to a non-deadly hit and run, there is no doubt that contacting the PD is important for the defendants.

However, considering the pandemic, failing to contact the PD sounds like more of an administrative matter, and threats of jail time might, by some, seem to be a little too hasty.

Although a common media trope, the stereotype of public defenders and their offices as being ill-budgeted and overworked is more true than false. Considering that, on average, 95 percent of criminal cases get sent straight to plea bargains, PD are often swamped with new cases and defendants to represent.

As of Feb. 18, there are five active cases out of a total population of 2,216 at the Alameda County Santa Rita Jail.

Yet, questionable changes in COVID-19 data and testimonies from those previously in-custody suggest that there may be more cases than what the Alameda County Sheriff’s Office (ACSO) reports.

In the past, details have been released by former individuals in-custody who report poor conditions and lack of COVID-19 prevention at Santa Rita Jail (SRJ).

One man named “John” recounted contracting COVID at SRJ in September. John told Vanguard reporters that the very first cell he was placed in for his 14-day quarantine was covered in blood, vomit, and feces which he had to clean himself. John was also transferred three different times as he quarantined, which he expressed was “reckless and dangerous as it put several people at risk.”

At SRJ, the total number of staff with COVID has risen from 61 to 109 since Thanksgiving. Darby Aono, a Berkeley Law student, has tracked COVID-19 in SRJ daily since last spring.

Only 32 percent of staff at SRJ were tested in January – an alarming percentage given that the director of the Alameda County Public Health Department (AC-PHD), Kimi Watkins-Tartt has claimed that the goal is to get 100 percent of staff tested each month.

Considering all of the COVID-19 risk in the jail, Judge Clay still threatened defendants with jail despite his awareness of the risk in putting more individuals in jail.

“All right sir, I’m gonna give one more chance. The only reason I’m doing this is because we are in the middle of a pandemic right now. Otherwise, I would remand you today,” Judge Clark told Roberto Rosas, a defendant who had allegedly failed to call the public defender’s office twice previously.

When asked why he did not call the office either time, Rosas responded, “I didn’t think I would need it.”

“And were you under the impression that that was just discretionary on your part? That you didn’t have to follow my orders?” Judge Clay asked further.

After stating that he “did not know,” Rosas informed Judge Clay that he did not want to go to jail. “I’m asking for one more chance,” Rosas further pleaded – the judge’s response to Rosas: “Pull your mask up over your nose.”

After a few moments, Judge Clay decided to give Rosas “one more chance to get this done (contact the public defender’s office),” explaining his sole reasoning to be the current pandemic.

“If it’s not done next time, pandemic or not, I’m going to remand you into custody so it could be done,” affirmed Judge Clay.

Roxanna Jarvis is a fourth-year student at UC Berkeley studying Political Science and Public Policy. She is from Antelope, CA. 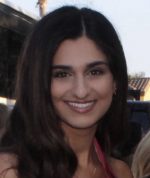 Nadia Kazempoor is a court watch reporter for The Vanguard at Berkeley. She is a freshman Political Science student at Cal, originally from Huntington Beach, CA.

Angel Valdez Ordoñez is a court watch reporter for The Vanguard at Berkeley. He is a third-year student at UC Berkeley majoring in Sociology and Social Welfare with a minor in Gender and Women’s Studies hoping to pursue a career in anti-discrimination law. Angel is from Santa Barbara, California.

Share:
Tags:AlamedaAlameda Court WatchCoronavirusCourt WatchFremontThe Vanguard at Berkeley
Previous : Unfamiliarity with Charges Leads to Court Confusion in Catalytic Converter Case
Next : Just Another Day in Courtrooms 60, 61, 63 – But There’re Always Cases that Stand Out