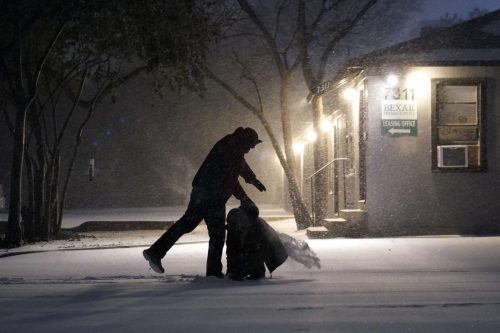 TEXAS — As a violent winter storm ripped through Texas in mid-February, widespread disruptions to power grids and water systems left incarcerated individuals across the state without access to heat and running water for days on end.

The devastating weather event, now unofficially referred to as “Winter Storm Uri,” had an unprecedented impact on the state’s power plants and particularly on natural gas, which is the driver of a majority of Texas’ power supply.

As frigid temperatures froze the pipelines that transport natural gas, utilities services were forced to implement controlled power outages in order to avoid long-term damage to the grid. In effect, officials report that approximately 33 Texas prisons lost power and 20 had water shortages.

Incarcerated individuals in several prisons resorted to stuffing extra clothing through broken windows in an attempt to keep warm. Prison officials claim that backup generators kept electricity on, but those detained in such facilities refute these claims or describe, “Even when they [the generators] did [work], aging or shoddy ductwork left some cells so cold the men shivered while wearing all of the clothing they owned.”

Unlike other Texans who have the opportunity to seek warmth in their cars or at local warming centers, incarcerated folks are not even able to gather extra blankets and coats or huddle together for heat.

Additionally, the storm threatened already poor hygienic conditions in facilities through the lack of running water, which completely halted sewage systems. With toilets overflowing, prison staff suggested individuals either cover toilets with pieces of cardboard to prevent overflow/smell or gather snow into buckets in order to flush the sewage.

Making matters worse, incarcerated people are restricted from utilizing hygienic products such as hand sanitizer to keep clean due to its high alcohol content—even during the midst of the deadly coronavirus pandemic.

Prison reform advocates are underlining the fact that prisons were disproportionately impacted by the storm due to years of under-investment in infrastructure, particularly in heating/cooling systems.

While the storm highlighted a newer trend of freezing temperatures in Texas prisons during the winter months, advocates have warned about the dangers of heat-related deaths in prisons for years; in fact, at least 23 incarcerated individuals in the state have died due to heat strokes in the past two decades alone.

The crisis could be alleviated relatively easily with the implementation of air-conditioning in facilities, but there is little political and economic incentive to do so. Texas state Senator John Whitmire boldly stated, “We couldn’t afford to [install air-conditioning in prisons] if we wanted to. But number one we just don’t want to.”

The impact of the storm on prison systems is especially alarming, given the recent increase in natural disasters caused by the urgent phenomenon of global warming.

Members of the Incarcerated Workers Organizing Committee (IWOC) and writer Kim Kelly explain, “The devastation of climate disaster does not threaten the lives of the incarcerated all by itself; rather, IWOC says that the onus lies on prison officials who place inmates in the direct path of environmental harm. As record-breaking temperatures continue to heat up the outside world, the people who are kept inside cages of concrete and steel, with no control over their conditions or ability to leave, are powerless to escape its effects.”

Some are hopeful that President Joseph R. Biden, Jr.—with the largest team of climate change experts of any previous administration—will take measures to address the toll of climate disasters on the incarcerated population.

However, this seems rather unlikely, given that even more progressive politicians (such as Representative Alexandria Ocasio-Cortez and Senator Edward Markey, architects of the Green New Deal) have historically failed to include incarcerated people in their public policy proposals regarding the climate crisis.

If we are to then prevent disasters such as Winter Storm Uri from wreaking havoc in the future, it is clear that incarcerated individuals must be not only a part of—but rather central to—discussions regarding the climate crisis and environmental racism.

As articulated by Michael B. Gerrard, director of Columbia Law School’s Sabin Center for Climate Change Law, “Just as correctional administrators should begin educating themselves about climate change and how it will affect their departments, so should policymakers, academics, and others who are already working on adaptation widen their compass to include corrections.”

Kritika Singh is a writer for The Vanguard at Berkeley’s prison reform desk. She is a freshman at UC Berkeley, studying Political Science. She is from Tracy, CA.