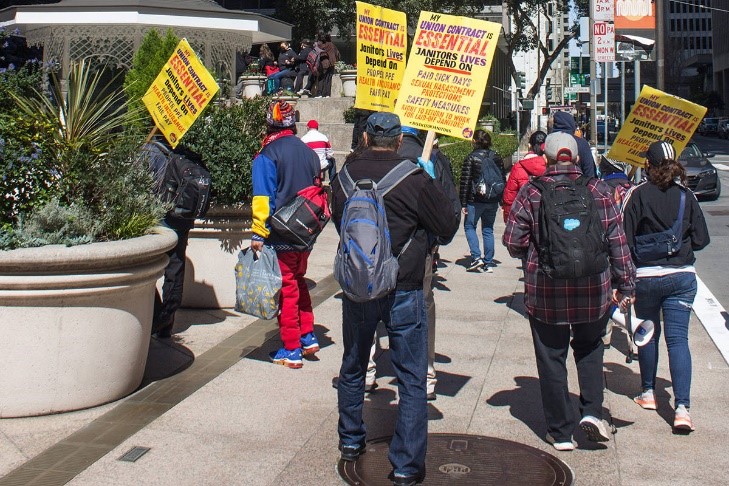 SAN FRANCISCO – District Attorney Chesa Boudin protested with janitors against unfair labor practices this past week, noting that he was “proud to march with the SEIU Local 87 early this morning to demand that janitors’ health, safety, and workers’ rights are protected.”

This past Wednesday, more than 700 janitors went on a three-day strike over continuous workplace injustice over the course of eight months of failed contract negotiations.

The janitors are employed by contractors, such as AMB Industries and Able Services, in over 600 buildings in the city. Some of these workers also work in places leased by big companies, such as Google, Facebook, and Salesforce.

The janitors were represented by the Service Employees International Union Local 87. Two protests were held, one outside the Salesforce Tower and the other outside 101 California Street.

Over the course of eight months, the janitors have been seeking contracts that ensure fair pay, seniority rights, ventilation systems during the night when most janitorial services are used, and workplace safety protections, such as sexual assault safeguards. These efforts were started in August during the height of the pandemic, and they have yet to be addressed, workers claim.

According to the workers, it has become clear that new contracts are needed as the city begins to reopen under limited capacity. One of the demands of the janitorial workers is to rehire the 3,000 janitorial workers, staff, and cleaners that were laid off at the beginning of the pandemic.

According to one janitorial worker, “we feel like we’re the bottom of the barrel, like we don’t matter. We’re the ones who have put ourselves and our families in jeopardy.”

The worker argued that, “with this negotiation they just don’t care about us and I’ve been through many and they haven’t been like this. I feel like the companies are taking advantage of the pandemic and taking away everything we’ve earned,” Johnson said. “Nobody wants to go on strike, but they pretty much forced us to do this.”

The protesters also highlighted the lack of basic resources provided to janitorial workers. Due to this significant lack, the union reported that approximately 26 janitors in the city have died from COVID-19.

This lack of resources is specifically in regards to PPE equipment, in which one janitor claimed, “we’re still picking up trash without masks or hand sanitizer. The companies give us one to two masks every two to three months and expect us to ration it out.

“And while I’m struggling to cover my expenses because my hours have been cut, employers don’t want to cover increased costs to our health insurance. It’s unacceptable, especially in the middle of a pandemic,” the worker added.

Although the San Francisco Maintenance Contractors Association claims it is “committed to working with SEIU Local 87 to negotiate an agreement that is fair to employees and our clients alike” and that the janitorial workers in the city receive “one of the highest wages for janitors,” they have yet to produce any change.

The Association claims they have spent nearly $1.5 million on PPE equipment, including gloves, masks, googles, hand sanitizer, disinfectants, and Tyvek suits. However, the protestors claimed otherwise.

In the fight against unfair labor practices and workplace injustice, city leaders, including supervisors Ahsha Safai and Matt Haney and District Attorney Boudin, joined the protest occurring outside the Salesforce Tower in support.