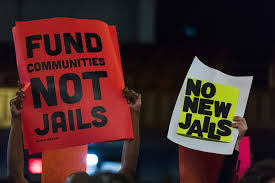 On Wednesday March 10, 2021, Sacramento County Board of Supervisors will vote on a project that, if approved, will grant a $10 million construction contract to accelerate an expansion of the Main County Jail in downtown Sacramento. This expansion will lead to a $200 million investment by Sacramento County in a criminal justice system that has “failed to provide constitutionally required mental health and medical care to people in the jail, employed harsh and extreme forms of solitary confinement, failed to implement essential suicide prevention measures, and discriminated against people with disabilities (Mays v. County of Sacramento, 2019).” A $200 million jail expansion is only a viable and sustainable solution if Sacramento County is committed to its business model of profiting off of trauma.

A new jail annex will not solve the systemic and cultural issues resulting from the long-standing inappropriate behavior and abuse by the Sacramento County Sheriff’s Department. The Mays Consent Decree, the outcome of a class action lawsuit brought on behalf of the nearly 3,700 people incarcerated in Sacramento County’s jails against Sacramento County, mandates significant reforms to improve jail conditions and to end the violation of the rights of people with mental illness and other disabilities. Gifting the Sacramento County Sheriff’s Department a brand-new building and hoping that accountability will follow is not only expensive and inefficient, but it further perpetuates the human rights violations to one of our most at-risk populations by not providing for their immediate needs.

Using a new jail to manage people suffering from mental illness does not improve their quality of life. Conditions inside the jail, such as harsh and extreme solitary confinement, serve to exacerbate their symptoms and lead to further deterioration of their mental and physical health. Lorenzo Mays spent nearly eight years in solitary confinement, consisting of 23 hours or more in a small cell every day. He experienced auditory hallucinations, deepened depression, severe anxiety, suicidal thoughts, and even a Vitamin D deficiency from lack of exposure to sunlight. Armani Lee, a person diagnosed with bipolar disorder with a history of suicide attempts, arrived at the Main Jail with a fractured pelvis and other significant injuries. The jail did not provide him with suitable accommodations, such as a wheelchair. On one occasion, he was placed on disciplinary isolation where he was not permitted to leave his cell for weeks, not even to shower. The jail also placed magnetic flaps over his tiny cell window, increasing his isolation and sensory deprivation. As a result, he experienced severe anxiety, depression, and suicidal thoughts. Leertese Beirge has a history of severe mental illness and he spent seven months in solitary confinement at the Main Jail while awaiting a bed in a state hospital. With no human contact and virtually complete isolation, he battled thoughts of self-harm on multiple occasions and eventually attempted suicide. As a result, jail staff stripped him of his clothes and forced him to sleep on the cold floor of either a barren safety cell or an empty classroom. It is not reasonable to expect that a new jail annex will remediate the sheriff department’s systemic failures to provide for the basic rights of people with disabilities and mental illness.

At least 83% of individuals with a mental illness who are detained and taken to jail do not have access to the treatment they need. Because they come straight from law enforcement custody – from the custody of police officers and sheriff deputies who are not trained to make meaningful clinical assessments of patients in the field – they are given only limited screening and inconsistent mental health care. People with mental illness are often given medication while in jail and, at best, a bottle of pills and a referral when they are released, thus leading to a revolving door of arrests and short-term incarceration with no real improvement in the person’s underlying mental health. People with a mental illness who become incarcerated are 70% more likely to return to jail at least once. Among those with previous incarcerations, the rates of recidivism are between 50 and 230% higher for persons with mental health conditions than for those without any mental health disorders, regardless of diagnosis. Given that suicide is the leading cause of death in jails, it is not surprising that there were 23 suicide attempts in the County Main Jail last year alone. Giving people medication and sending them to a homeless shelter or welfare hotel is not adequate. Without stability and support, they are more likely to stop taking their medication. A safe, supportive housing environment is more likely to produce stability than incarceration.

The drive to criminalize mental illness has more to do with ideology than effectiveness. People with mental illness are seen not as victims of a failed restructuring of public health services but as dangerous sources of disorder to be controlled by containment. Over 60% of people experiencing a mental health problem lack access to mental health services. Additionally, untreated mental illness increases the risk of recidivism. A lack of stable housing and income exacerbates mental health problems, makes treatment more difficult, and contributes to the public display of disability-related behaviors – all of which make it more likely that law enforcement will be called. Reducing social services and replacing them with punitive social control mechanisms works less well and is more expensive. The cost of providing community housing for people and providing them with mental health services is actually lower than cycling them through emergency rooms, homeless shelters, and jails. The Vera Institute of Justice found that incarcerating individuals with mental illness costs two- to three times what community-based treatment does. Instead of just funneling ever-increasing amounts of money into carceral structures that purport to provide enhanced mental health services, we should be providing easy access to varied, culturally-appropriate community-based services as needed.

It is the responsibility of every mental health advocate to care and fight for all mental disorders, including those that are even more stigmatized. Instead of investing in a new construction project, Sacramento County must prioritize funds for community services and programs designed to prevent recidivism and reduce the need to incarcerate people who are homeless or have serious mental illness. Build mental health facilities that serve the whole person and their families. Make larger investments in community-run programs, such as MH First and other community-based 911 alternatives for mental health emergencies, that are trusted by those who live in our most underserved areas. Invest in diversion programs that restore people and not involve further in the criminal justice system via the Probation department. Invest in substance abuse programs that heal the underlying communities. Decriminalize sex work and build trauma-informed programs that restore people. Invest in youth job development, and mental health services with social service professionals who are trained in restorative justice. Reimagine economic innovations that transform our entire Sacramento community to one of shared abundance. For the greater good of us all.

Let your voice be heard. Call and/or email your County Supervisor and join me in calling on the Board to end this project and commit to alternatives to incarceration that prioritize public health and community safety.

You can also sign the petition from Decarcerate Sacramento to Stop the Main Jail Expansion Project here: https://actionnetwork.org/petitions/no-new-sac-jail?source=direct_link&

Social justice has always been a major interest and her passion for activism was ignited after the killing of George Floyd. Since then, she has volunteered with local racial justice organizations to foster awareness of social injustices and to promote community solidarity. Her involvement has included consultation regarding the importance of self-care for activists, design & co-facilitation of healing spaces for community events, and promoting awareness & organizing support for non-law enforcement response to mental health crises. Dr. Corrine strives to not just be a culturally competent practitioner but an anti-racist psychologist. She believes that to be an anti-racist psychologist requires not only acknowledgement of racism but active opposition to racism within ourselves, our research, our teaching, our organizations, our practice, and the policies shaping our society.

One thought on “Guest Commentary: Can’t Get Well in A Cell, No Matter How New the Building Is”