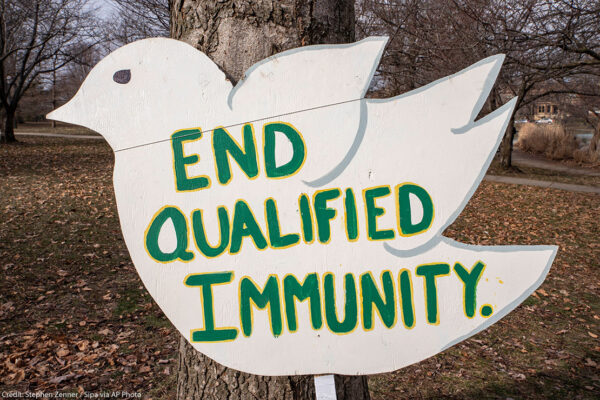 When courts are forgiving police for tasing people who are covered in gasoline, things have gone very wrong.

By West Resendes and Somil Trivedi

On July 10, 2017, Gabriel Eduardo Olivas was having a mental health crisis in his home. His son called 911 to ask for help. Instead of sending mental health workers with the tools and experience to help Mr. Olivas, the 911 dispatcher sent armed law enforcement. The officers who arrived did not treat Mr. Olivas — instead, they killed him. Mr. Olivas was soaked in gasoline when the two officers tased him, even though another officer warned them seconds earlier that tasing him would ignite the gasoline. In other words, to prevent the mere possibility of Mr. Olivas setting himself on fire, Arlington police did it for him.

Mr. Olivas’ family sued the two officers and won in district court. Three federal appellate judges on the Fifth Circuit Court of Appeals overturned that ruling last month, applying qualified immunity. In short, qualified immunity is a legal defense that allows police officers and other government officials to shirk legal responsibility for their actions, unless they knew their conduct would violate “clearly established law.” Though the appellate court found no constitutional violation at all — much less a clearly established one — they made the same mistake that most courts do when applying the qualified immunity doctrine: They required prior cases with virtually identical facts to guide the decision, rather than the obviousness of the harmful conduct.

There’s nothing more obviously wrong than tasing a man in crisis, doused in gasoline, knowing it will kill him. On Tuesday, we joined the family and several other groups from across the

ideological spectrum — the Cato Institute, the ACLU of Texas, Americans for Prosperity, and Disability Rights Texas — in asking the full Fifth Circuit to reconsider their decision.

Specifically, we’ve asked the appellate court to reconsider in light of recent, potentially encouraging shifts at the Supreme Court about qualified immunity. The Supreme Court recently held that, in cases with “particularly egregious facts,” plaintiffs could win cases without having to rely on a previous case about the exact same conduct. In doing so, the Supreme Court overturned a Fifth Circuit decision that granted qualified immunity to corrections officers who held two incarcerated people in inhumane conditions for six days. Three months later, the court sent back yet another Fifth Circuit decision granting qualified immunity under similarly deplorable grounds (pepper spraying an incarcerated person for “no reason at all”).

Yet despite having been directly reversed not once but twice on this very issue, the Fifth Circuit again ignored the Supreme Court’s clear signal that the lower courts should no longer automatically grant qualified immunity simply because there’s no prior blueprint.

We want the appellate court to rehear this case to explain how it and other courts should apply the recent Supreme Court cases. But if the court fails to take this opportunity, the justices of the Supreme Court must act: namely, by abolishing qualified immunity. And, no matter what the federal judiciary does, Congress can and should eliminate qualified immunity immediately and on its own. States can also axe qualified immunity in their courts — Colorado already has — so that people wronged by their government can sue under state constitutions as well.

By doing away with qualified immunity, we can begin to hold officers accountable for their conduct while reimagining their role in our communities. However, that’s only a temporary solution. The real fix is to get police out of the business of responding to mental health crises entirely. The lives of people with disabilities are at stake: Police are 16 times more likely to kill someone with an untreated mental health disability, compared to someone without a disability, and people with disabilities represent between one-third to half of all people killed by police. At least one out of every four people killed by a cop in the last six years was experiencing a psychological crisis.

West Resendes is a Skadden Fellow and Somil Trivedi is a Senior Staff Attorney with the ACLU.  Originally published here.