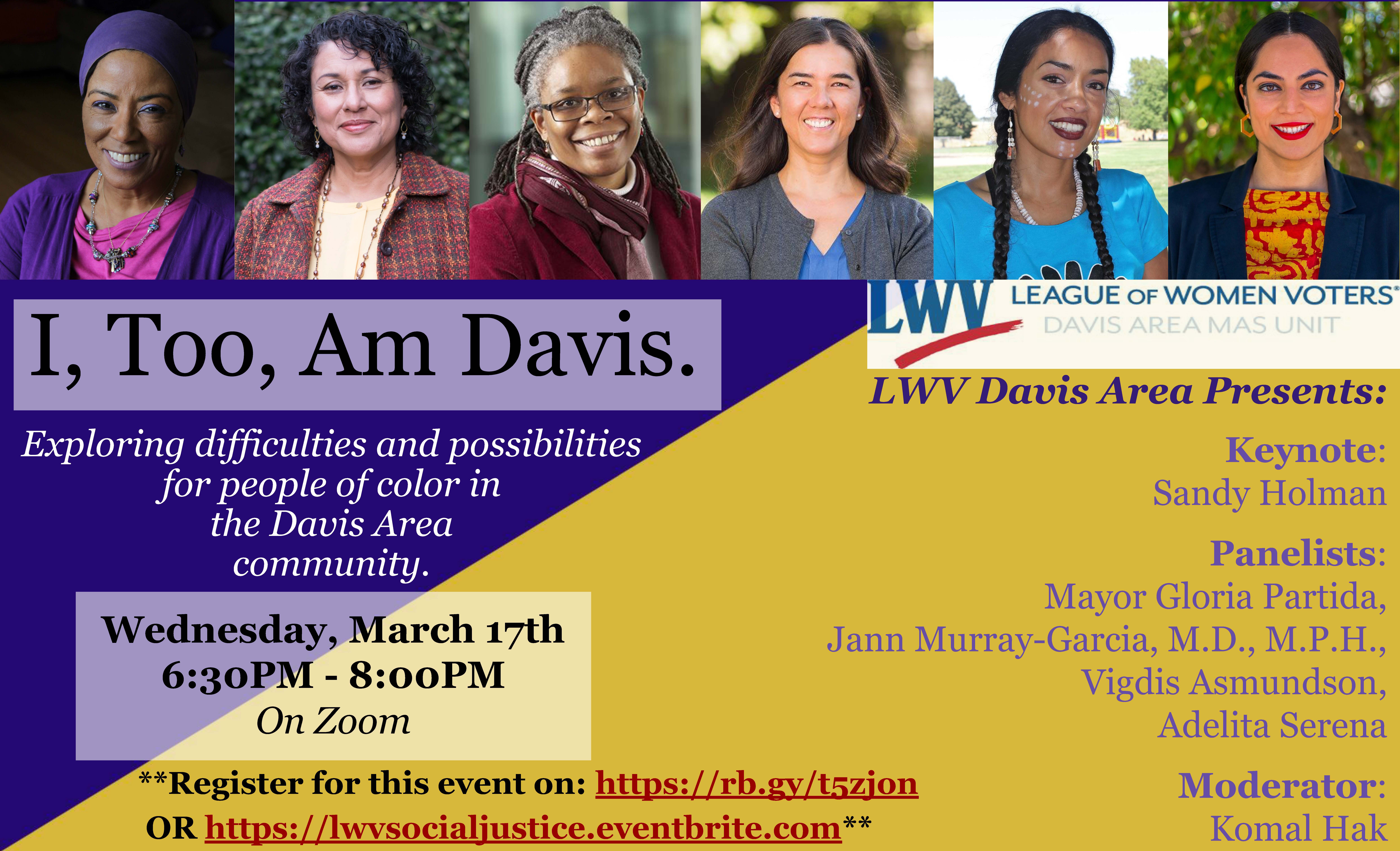 Moderator Komal Hak, Director of Communications for LWV, began by sharing that the name of the event  “I, Too, Am Davis” takes inspiration from Langston Hughes “I, Too, Am America,” a poem that delves into the topic of racial inequality.

The event began with keynote speaker Sandy Holman, an award-winning author and the Director of the Culture Caring, Optimistic, Open-Minded People (C.O.-O.P.), an organization that seeks to promote inclusion and equity among other values.

As director of C.O.-O.P., Holman “helps youth/young adults survive and thrive and work with those who engage them.” This is partly through providing “culturally relevant” keynotes and seminars.

Holman stated the importance of having forums about social justice for people of color. She emphasized, “we are connected and not only do we need to have these forums, as I said earlier, we need to have action.”

powerful as we’ve seen, but if it stops there is not enough.”

Holman also described the situation for people of color in Davis, stating, “You need to understand, a lot of you don’t have to walk outside and worry about being stopped by the police or worry about your safety because right now things are so heightened and they are targeting people of color and people who are different in the queer community and so forth.”

She urged people to come together collectively and work toward a viable solution and “[b]e a part of a mosaic that works together to really lay the foundation for systemic change.”

Once Holman finished her presentation and introduction, the event transitioned into a panel discussion.

The panelists were Davis Mayor Gloria Partida; Dr. Jann Murray-Garcia, a Pediatrician and Associate Health Sciences Clinical Professor at the Betty Irene School of Nursing and Vigdis Asmundson, an experienced teacher and a Ph.D. student at UC Davis.

The first question Hak posed was, “What past challenges did you or your family face in a predominantly white community and what challenges remain?”

Murray-Garcia recounted an event that she experienced in Davis. When her daughter was a toddler she wanted to get her a library card. The person working at the library desk looked up briefly and said, “Well she has to be able to sign her name.”

Murray-Garica was in disbelief, “You’ve got to be kidding me. We got dressed up for this and this is what we get. This is what you give a child.”

While many Davis residents might be oblivious to these occurrences, Murray-Garcia wanted to emphasize that she “just want[s] folks to know we live on different planets, even as we walk on the streets of Davis.”

The second question the panelists answered was, “How has race and culture played a role in getting your activism started?”

While Mayor Partida has been deeply influenced by her race and culture, she clarified that other factors also played a role in her activism.

“I was a teenager and I started my activism around the injustices that were in my community,” she said. “Because we were a very poor community and we were very under-served and what I felt more was the poverty, the oppression of the poverty.”

Later, Mayor Partida made an important correlation between two interconnected factors, stating, “And as I went further down in my journey I realized that that was connected to race. That was a system that made sure that people of color were kept poor and out of power.”

Asmundson also agreed that race and culture played a role in her activism, but added that there is an intersectionality to being a woman.

During a district science fair, she found it surprising to find that many students were amazed by the number of female scientists that were present.

She added, “[It’s] frustrating that it’s something that’s surprising, but every year I had multiple students say something about.”

Hak closed the discussion by informing the audience that the City of Davis is planning to update its general plan and community vision. She also reiterated the importance of open discussions, such as this forum, to promote inclusion and diversity. Hak encouraged the audience to get involved in the LWV’s newly established Social Justice Committee.

Flor Sanchez is a third-year student at UC Davis, currently double majoring in Communications and Managerial Economics. She is from Patterson, CA and enjoys traveling.

One thought on “League of Women Voters Present Social Justice Forum: I, Too, Am Davis”