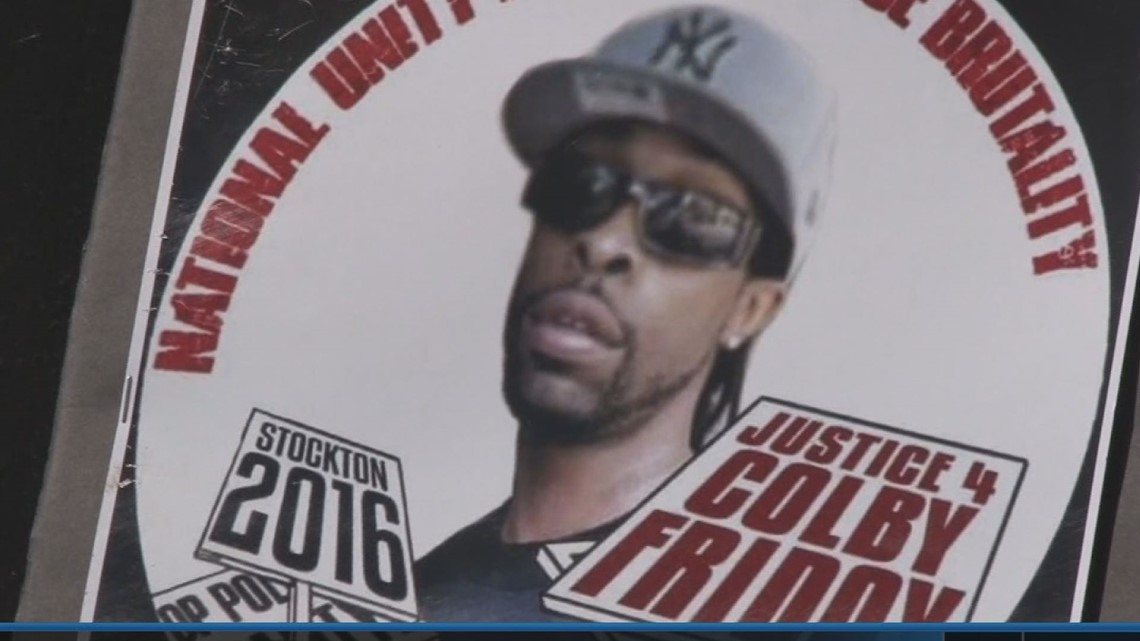 STOCKTON – David Wells has been known as a dangerous and even “creepy” cop to the Stockton community for at least a decade.

Now, Stockton taxpayers have paid a price for Wells’ rogue cop mentality and actions – $3.25 million, one of the biggest police killing payouts in city history.

That says a lot. Stockton police shot 27 people from 2011 to 2017, killing 17. And have a history of paying Black families for killing and beating their loved ones.

Lawyers for the children of the 30-year-old, unarmed Black man shot and killed by Wells nearly five years ago announced the settlement Friday afternoon, ending years of protests and family pain.

The City of Stockton, Stockton Police Department, Police Chief Eric T. Jones and Officer David Wells were sued in a federal civil rights wrongful death action on behalf of the daughters of Colby Friday, who was shot in the back and killed on Aug. 16, 2016, according to civil rights lawyers in Oakland and Sacramento.

Wells is still an officer employed by the Stockton Police Department. The District Attorney refused to prosecute him, but that’s not a surprise – the entire department was asked to recuse itself after a video of a department Halloween Party showed racist comments and costumes.

Civil rights attorneys Mark Merin of Sacramento and Yolanda Huang of Oakland filed the federal wrongful death action in August of 2017 in U.S. Eastern District Court in Sacramento on behalf of the daughters of Colby, seeking unspecified damages and injunctive relief.

The lawsuit notes that Colby Friday was unarmed, and shot in the back. One witness said officer Wells actually told Colby “I am going to shoot you in the back” before firing at least two shots. Wells also did not activate his body camera in violation of the city of Stockton and SPD rules.

Even before Wells’ shot and killed Colby Friday, officer Wells  was named one of the top 10 most racist and violent officers in Stockton by the community organization “Stockton Police

Officer Wells confronted Colby Friday when Colby was in a neighborhood store.  When Colby left, Wells, pulled out his gun and chased Colby around the store, ultimately emptying two full cartridges from over 30 feet away, shooting and killing Colby Friday from the back.  a bystander who witnessed the shooting heard Wells threaten “I’ll shoot you in the back” before Colby was killed.

Colby Friday’s family issued a brief statement: “These last few years our family and his children have deteriorated over the loss of Colby – this will forever haunt Colby’s children. The lack of responsibility which we hold all our jurisdiction systems to have, failed Colby Friday, his children, his mother, and his family along with other numerous hurting mothers and family members. Colby’s girls will never get to say, ‘Hi dad.’

“David Wells will forever be out there terrorizing our communities and streets till we revoke the California police officer bill of rights. No payout will ever be enough with all these loving lives taken by a badge with no accountabilities.”

Attorney Merin said officer Wells had “already been identified in the community, prior to the shooting, as a particularly violent, abusive officer.  He decided to stop Colby Friday solely because he thought Colby ‘fit the description’ of another black male who was wanted for investigation on a domestic violence charge.

“Wells had never seen the person who was wanted and he had never even seen a photograph of the wanted person, but the person they were seeking was a Black male, about 6 feet tall with hair described as being in corn rows.  Colby Friday was not the man he was looking for and was not wanted for any reason by the police, although he was a Black male with corn rows,” said Merin.

“While he was running after Friday, Wells said if Friday didn’t stop[ he would shoot him in the back.  Wells opened fire from 50 feet away and emptied his magazine of 13 bullets as Friday fell to the ground, he then reloaded before he approached the dying Friday.

“The last several shots, including one to the head, which was clearly fatal, were fired while Friday was already on the ground. Wells’ shooting of Friday was found by the department and the District Attorney to be justified,” Merin added.

There have been a series of multi-million payouts by the city of Stockton in recent years to Black families whose family members have been killed or terrorized by Stockton police.

The original pleading in U.S. District Court in Sacramento emphasized that Stockton and the Stockton Police Dept. have a “significant history of problematic officer-involved shootings and use of unreasonable force, particularly with respect to the shooting and killing of unarmed and non-threatening African-American men,” chronicling that from about 2011 and 2017, the police force shot 27 individuals, killing 17.

And officer Wells was “well-known to be a violent police officer and has been the subject of multiple citizens’ complaints alleging his unlawful conduct, including instances of use of unreasonable force. Some community members said Wells would “follow” them, and called him “creepy.”

“On February 15, 2015, more than a year before Defendant (Wells) killed Colby T. Friday, one source of alleged reporting of misconduct and abuse by (Stockton) police officers, the ‘Stockton Police Department

Corruption Reporting Page,’ https://www.facebook.com/Stockton-Police-Department-Corruption-Reporting-Page-20-609954912484173/ published a list of ten (Stockton) police officers to ‘keep an eye out for.’  Defendant (Wells) was identified as number 1, first on the list,” according to the complaint.

Huang was the attorney of record in a court filing in 2017 that charged the entire San Joaquin County District Attorney office – which hosted a 2016 Halloween party that mocked the Black Lives Matter movement – suffers from “systematic racism” and should be disqualified from prosecuting Black Lives Matter Stockton activists arrested protesting police killings.