The case literally about nothing continues to escalate.  I view this case as a poster child case for Everyday Injustice—after all, here you have a group of protesters who were protesting police misconduct and systemic racism who have been over-prosecuted by the SLO DA’s office in what is essentially a case-positive of everything wrong with the system.

The truth is nothing happened.  As Tianna Arata’s attorneys pointed out in the interview, they actually consulted with the police prior to going on the freeway—they were asked how long they

needed, they wanted 8 minutes 46 second seconds to symbolize the length of time Derek Chauvin’s knee was on George Floyd’s neck.

The one incident that occurred was at best ambiguous—where a protester blocked a vehicle, the vehicle hit the protester (the protester is facing charges, not the driver) and another protester smashed his skateboard into the back of the vehicle, breaking its windows.

The attorney for the driver, who has not been publicly identified, said that his client wants no part in the prosecution of the protesters.

On March 1, the Vanguard interviewed three of the defense attorneys for its Everyday Injustice podcast.

The SLO DA this week filed a motion to gag the defense attorneys, preventing them from publicly discussing the case. 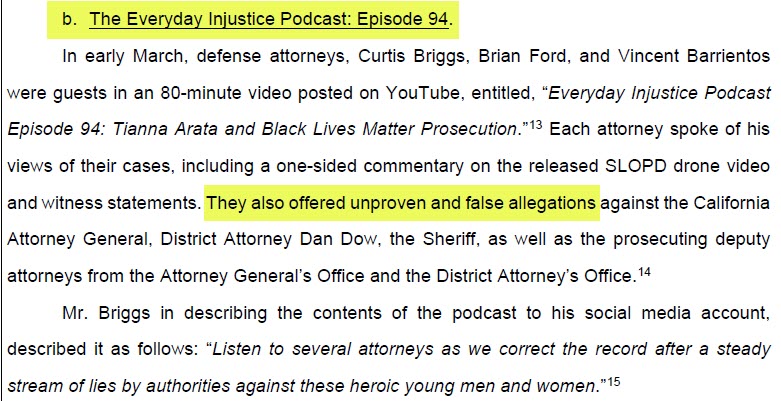 He continues: “Each attorney spoke of his views of their cases, including a one-sided commentary on the released SLOPD drone video and witness statements. They also offered unproven and false allegations against the California Attorney General, District Attorney Dan Dow, the Sheriff, as well as the prosecuting deputy attorneys from the Attorney General’s Office and the District Attorney’s Office.”

Mr. Briggs, in describing the contents of the podcast to his social media account, presented it as follows: “Listen to several attorneys as we correct the record after a steady stream of lies by authorities against these heroic young men and women.”

Later, he writes, as indicated: “Briggs now attempts to transfer this criticism onto District Attorney Dan Dow, claiming it is Mr. Dow that emulates the tactics of President Trump so as to gain national media attention.”

The DA argues: “This ratcheted-up media campaign, must be seen as an attempt to plant seeds of doubt into the jury venire, questioning the integrity of public institutions, all under the false goal of promoting the social justice movement.” 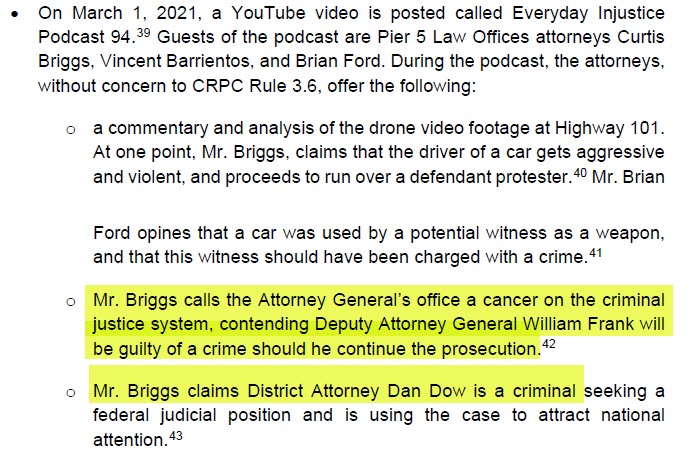 Finally, the DA charges that on March 1, guests of the podcast are Pier 5 Law Offices attorneys Curtis Briggs, Vincent Barrientos, and Brian Ford. “During the podcast, the attorneys, without concern to CRPC Rule 3.6,” offer the following:

But, wait a second.  In December, Judge Matthew Guerrero ruled that DA Dan Dow had a clear conflict of interest, requiring him to recuse himself from the criminal case against 20-year-old protest leader.

The ruling hinged on the DA’s inappropriate use of a campaign letter where the DA’s wife attempted to raise money by attacking Arata and her fellow protesters.

In September, “Mr. and Mrs. Dow sent out a campaign fundraising request via email on his birthday. This email sought financial campaign contributions and stated, “Dan needs to know more than ever that you support him, and he really needs your financial support so he can keep leading the fight in SLO County against the wacky defund the police movement and anarchist groups that are trying to undermine the rule of law and public safety in our community.

“We had planned his kickoff re-election campaign fundraiser to be this month, but due to COVID and all the crazy protest activity, we were not able to pull it off.”

The fundraiser continues, “You can send Dan a Happy Birthday message in the comments section when you make a generous financial contribution TODAY to his campaign for reelection.” “Your support will help to ensure that Dan will continue in spite of the ‘defund police’ and George Soros type of opposition happening against DA’s all over the state and nation.”

The judge ruled: “The September 4, 2020, email establishes a clear conflict of interest.”

First, he writes that “by delivering this fundraising email to potentially tens of thousands of people immediately after the filing of charges, Mr. Dow sought political and professional benefit and campaign contributions in conjunction with the prosecution of the above-entitled cases. This creates bias towards charging and the particular outcome, which makes it unlikely that the defendant will receive fair treatment during all portions of the criminal proceedings.”

Second, “the statement used inflammatory terms such as ‘anarchist,’ ‘crazy’ and ‘wacky.’ which is an extrajudicial statement made to potential jurors in an attempt to sway them and get them to make a financial contribution. This interferes with the Defendants’ right to a fair trial.”

Given that, it does not appear that the DA’s office has standing to file this motion.

And second, one of the reasons that the DA’s office was removed was their bias.  They complain about the defense and yet use their own invectives, at one point calling the statements “inflammatory” and then using their own inflammatory language arguing that they “offered unproven and false allegations”… and then later, “all under the false goal of promoting the social justice movement.”

It seems like the DA here is using this motion to fire shots back at the defense, rather than actually pointing out actual instances of wrongdoing by the defense.  We will see what the judge decides to do about it.