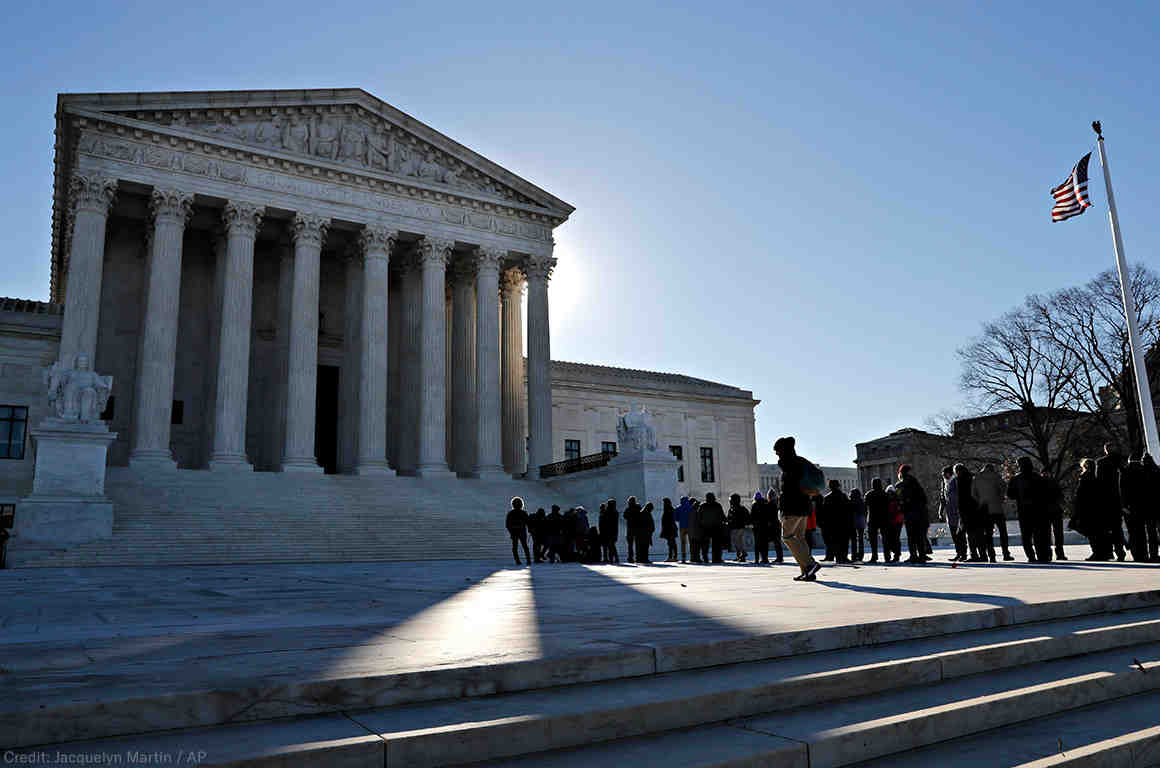 Petitioner Arthur Lange was charged in October 2017 with a misdemeanor DUI and a loud noise infraction. He was arrested in his garage by CHP Officer Weikert, who had been following Lange for a few minutes after witnessing what he believed to be loud noise infractions —excessively loud music emanating from lowered windows, as well as intermittent honking—originating from Lange’s vehicle.

Weikert didn’t use his siren and only turned on the overhead lights once Lange turned down the road where his home was located. Lange—who claims not to have known that the officer was behind him—then pulled into his garage and closed the garage behind him, while Officer Weikert parked in the driveway just outside.

As the garage door closed, Weikert placed his foot underneath to keep it from fully shutting, and then entered the garage to conduct his traffic stop. Weikert then arrested Lange for a DUI after smelling alcohol on his breath; Lange’s blood alcohol content was later measured to be significantly over the legal limit.

The state prosecutors team cited that when Lange didn’t stop after Officer Weikert activated his lights, Lange had given “‘probable cause to arrest'” and initiated a “hot pursuit,” therefore waiving the warrant requirement for entry into his home. Lange has asserted that he didn’t know the officer was there, and thus the incident couldn’t be legally justified as a “hot pursuit” because there was no intentional attempt to flee the scene.

Evidence collected under illegal searches must be dismissed, as established in Mapp v. Ohio nearly six decades ago—a precedent deemed the “exclusionary rule.” Lange believes the search and arrest conducted by Weikert were unconstitutional and has sought to have evidence suppressed—meaning discarded—under this precedent.

Probable cause and warranted searches are mandated by the Fourth Amendment, which states: “The right of the people to be secure…against unreasonable searches and seizures, shall not be violated, and no warrants shall issue, but upon probable cause, supported by oath or affirmation, and particularly describing the place to be searched, and the persons or things to be seized.”

Various cases have clarified what constitutes probable cause, as well exceptions to the warrant requirement such as in situations of “imminent danger” or items in “plain view” of officers during the course of legally conducting other duties like traffic stops.

Other cases have strengthened Fourth Amendment rights against warrantless searches, such as the 2018 case Collins v. Virginia, in which the Supreme Court decided that officers must acquire warrants in order to search driveways and other areas immediately surrounding homes, even if the said area is readily visible from the street.

In the majority opinion for the Collins case, Justice Sonia Sotomayor explained that protecting only enclosed property such as garages “would grant constitutional rights to those persons with the financial means to afford residences with garages in which to store their vehicles but deprive those persons without such resources of any individualized consideration as to whether the areas in which they store their vehicles qualify as curtilage.”

In Collins, however, an officer wasn’t in immediate pursuit of a suspect; rather, they had followed a tip about a possible stolen motorcycle in someone’s driveway, gone to the home, walked up the driveway, and lifted a tarp covering the motorcycle. The court’s

The petitioner’s side has argued that though some misdemeanor offenses certainly could be serious enough to necessitate warrantless searches based on “exigent circumstances”, a blanket ruling allowing all misdemeanors to be treated as such would be unnecessarily harsh on much more minor offenses. Determining whether a warrantless entry was justified should remain “on a case-by-case basis…leav[ing] the officer’s substantial discretion to analyze the situation, as the Court has always done,” while still mandating evidence for that justification. They also believe that the justification was insufficient in Lange’s case to necessitate warrantless entry.

The state prosecutors agreed, in its oral arguments, with “a case-specific approach for misdemeanors,” but suggested a broader definition of what constitutes a “hot pursuit” as more than only pursuits involving “some sort of reckless or extended chase.” This expanded definition could, if adopted, effectively consider any pursuit for suspected misdemeanors to be justification for warrantless entry.

What constitutes a misdemeanor versus a felony varies drastically by state. California considers a misdemeanor to be any non-infraction offense punishable up to a year in jail. Misdemeanors are generally considered to fall in severity between infractions and felonies. Some crimes, called “wobbler offenses”, give prosecutors the discretion to pursue either a misdemeanor or a felony charge, such as brandishing a weapon or certain forms of statutory rape.

Some of the Justices have been wrangling with state variations. Chief Justice Roberts stated that “[t]he line between misdemeanors and felonies is very hard to draw” and is often “counterintuitive”; Justice Breyer noted that the state’s position could present a “cruel trilemma” making it “see[m] like the home isn’t the castle at all for the most trivial of things.”

Beyond questions regarding how to account for state differences, other Justices explored other facets of the presented arguments. Justice Barrett inquired about the perceived difference between “escaping arrest and evading arrest” in regard to justifying warrantless entries, while Justice Thomas asked the petitioners to clarify how to “reconcile” the exclusionary rule—“which has no basis in common law”—with frequent references to common law as the basis of their arguments.

It’s not entirely clear at the moment how the majority of the Court might decide this case. Since Collins, two new Justices have been confirmed—Justices Kavanaugh and Barrett—and even those who were present for Collins seem to have reservations about Lange. Regardless, the decision of the case could significantly shift Fourth Amendment dynamics between officers and suspects.

Sam is a Northern California native currently majoring in Spanish and Linguistics at UC Davis. Writing is a lifelong passion, and politics a more recent endeavor that invokes in her an immense fascination. Eventually, she hopes to work in government or other public service.

Share:
Previous : Chancellor May on In-Person Classes, Vaccine Rollout Information and Other Updates
Next : Defendant Asks for ‘Another Chance,’ Judge Reluctantly Issues Sentence