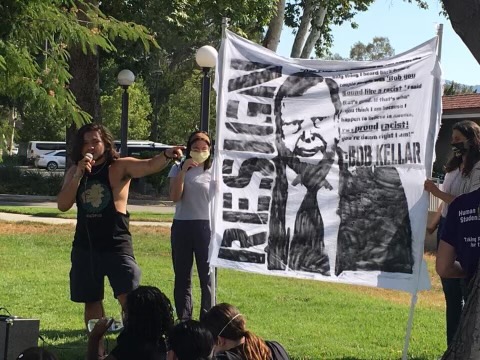 SANTA CLARITA – The youngest official on record in LA County, 20-year-old Sebastian Cazares, was elected to the College of Canyons School Board of Trustees in the Santa Clarita Community College District. He will represent over 35,000 constituents as the Area 3 Trustee.

“I’m ready to fight for equity for our students, educators, school staff, and community members — especially our most marginalized — with all the strength and tools I’ll have as a trustee,” he said.

College of Canyons is a Hispanic-Serving Institution. An HSI designation is granted by the Department of Education if 25% of students on campus identify as Hispanic. The federal government bestows grants to these institutions in hopes to aid the Latinx community.

The designation underscores the importance of creating an environment on campus where vulnerable populations feel welcome, Cazares said.

Before becoming a trustee, Cazares served as the president of the Associated Student Government. The 20-year-old advocates for the creation of a multicultural center during his tenure.

The establishment of the multicenter center is only the first step on Cazares’ journey to voice the unheard. As a trustee, he aims to foster educational diversity through increasing the variety of courses and programs the College of Canyons offers.

Many community college students in California also lack stable housing. A study from the Journal of Social Distress and Homelessness showed 19% of undergraduates experienced homelessness in the past year and 45% faced housing insecurity.

The elected official vowed to address this issue through the creation of a Basic Needs Center. The center provides students with food, professional clothing for interviews, personal hygiene products, and assistance finding housing.

Addressing the inequities that students undergo due to the COVID-19 pandemic is first on the agenda for the public figure. The pandemic has exacerbated the issues faced by underrepresented populations, the trustee said.

The Trustee transferred to UCLA in 2020 and will commute to campus when in-person instruction resumes in the fall. Carares balances his role as a trustee with the duties as a full time student. “I think it elevates my position because I know what it’s like to be a college student,” he said. “I’m a transfer student, I’m a commuter student, and I’m an elected official.”

Transfers and commuters are subgroups of students that are traditionally underrepresented at UCLA.

As a member of these minorities on campus, Cazares hopes his background inspires underrepresented students to actively engage with decision-makers about the issues they are passionate about.

“I hope… to provide a welcoming environment in the school board … where students can advocate for their issues,” Carzares said.

Traditionally, college students overlook the importance of voting in local elections, the UCLA student said. School board elections are the only forum that allows the public to weigh in on issues within higher education. He hopes his election reminds collegiate students of their responsibility.

Through the investment of civic education programs, students will understand the power of their voice and advocate to level inequities within higher education, Cazares said.

“Education … is an opportunity … to not just level the playing field, but truly teach (the) future leaders of tomorrow,” Cazares said.

The introduction to civic disobedience came from many different places for the third-year UCLA student. His mother’s family members served in World War II. Relatives of Cazares marched with Cesar Chavez and called for reform in the farming picking movement.

“I always just kind of felt a calling to that, especially in this political climate,” Cazares said.

The 2018 win of Democrat Katie Hill over Republican Steven King for the 25th Congressional District seat gave Cazares the motivation to consider entering the trustee race.

With the Black Lives Matter protests in the summer of 2020, Cazares’ clarion call to run for public office sounded. In a traditionally conservative town, many in his community began marching to protest George Floyd’s death.

“That moment really awoke me and really restored faith in what I was doing … I often felt like no one really cared about the minority experience,” Cazares said. “It felt empowering because people wanted me to win (as) the voice for the Latino community and marginalized people in general.”

Cazares also commented on the backlash he received when running for public office. “I’m in a historically conservative town,” said Carzares. “People would just completely brush aside what the campaign meant,” he added.

However, the support he received represents a larger shift in American politics.
The 2020 election provided record-breaking numbers for youth turnout rates – 52-55% of registered 18- to 29-year-olds voted in the election. Cazares’ election is only the beginning of a new movement of youth engagement within the United States.

“I kind of like the misconceptions, because I like to surprise people and prove them wrong,” Cazares said. “We’re the history makers right now.”

* EDIT: A previous version of the article contained a mispelling of Cavares’s name. We apologize for the mistake.

Ishani Desai is a writer for the LA Vanguard’s campus and city desk. She is a History major at UCLA, originally from Bakersfield, CA.

Arneet Gurtatta is an intern with the LA Vanguard’s Court Watch Program. She is a an aspiring lawyer, and currently a Business Economics and Political Science major at UCLA. Arneet is originally from Chicago, IL.