Davis, CA – The death of George Floyd ignited protests and inspired groups of citizens to seek out changing policing.  Here we are in the middle of the trial of Officer Derek Chauvin charged with the death of Floyd and a week after the Davis City Council took up a Floyd-inspired list of changes, and another death 12 miles away from the site of Floyd’s has evoked a new set of reactions.

“We’re back, we’re here,” Kate Mellon-Anibaba lamented on Tuesday.  She noted that they were attempting to focus on art and solidarity, “and we can’t really get our programming going because we keep coming back to this space to mourn, to grieve, because of the same shit happening every time.”

“Murdering police,” she said.  “Daunte Wright was 20 years old.  When I look at him, I look at my children.  I look at families with Black children trying to raise them in this world.  What cop sees is danger.”

“We need to get rid of the police—we’re done,” she said.  She said it was “cute” last summer with the focus on “defunding the police” and putting “more spending, more education—the system is corrupt, it’s f-ed up and we’re done.

“We keep saying the same every time,” she added. 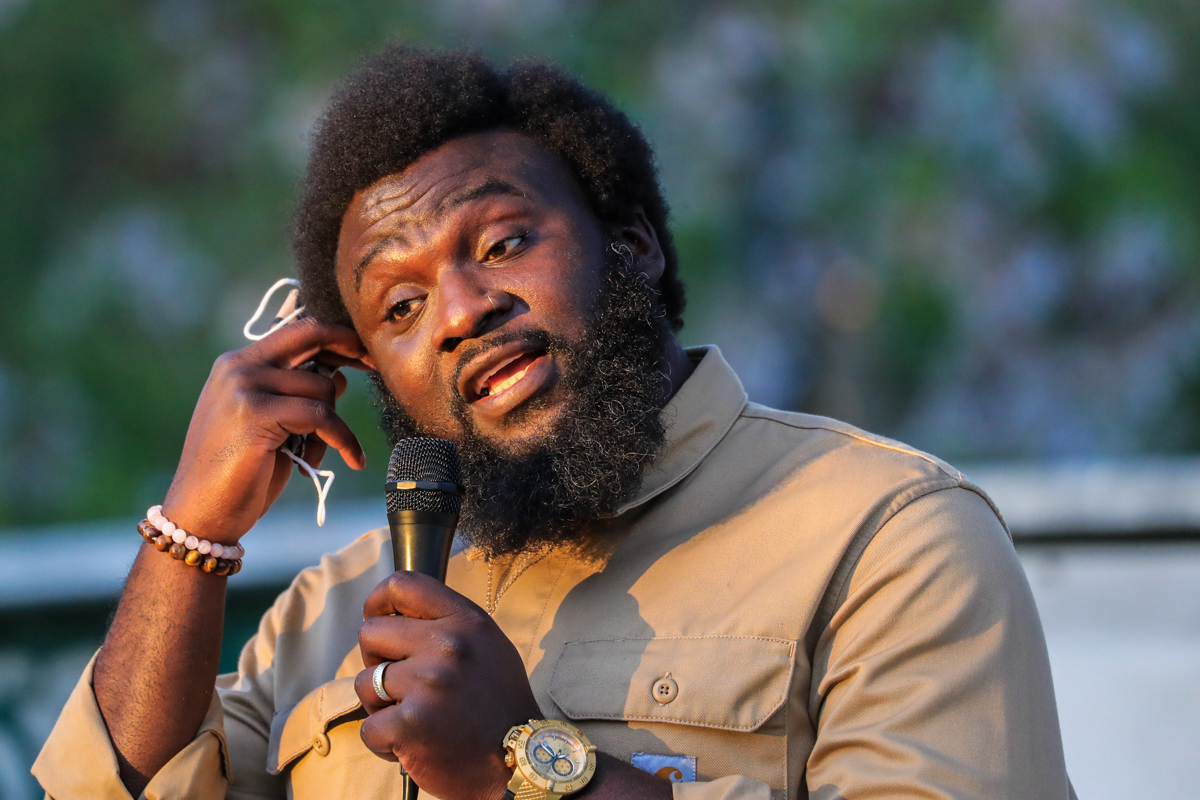 Suleman Anibaba had a similar reaction, “Here we are again.  It’s becoming like Ground Hog Day because we’re in the process of legally penalizing a cop a cop that murdered a Black man, and five or ten miles away during a trial a 20-year-old Black man gets shot down—that’s what we’re dealing with.

“For me it’s a trauma piling on a trauma,” he said.  “I feel like I’m getting closer to death.  It sounds scary but that’s where we are.  I am getting too familiar with death, with dying.”

Anibaba explained that he grew up in Nigeria, “but honestly it’s much worse here because cops hide behind white supremacy.”

He explained that last week he was pumping gas when a cop car came up behind him.  He saw the cop drive up, went back to pumping gas but then a thought crept in, “Why are you trusting this cop with your back turned, he could come up and shoot you in the head.”

Anibaba explained, “That’s what my brain told me.  That’s what trauma does.”

Dillan Horton is the chair of Davis Police Accountability Commission.

He said, “You hear a lot in the aftermath of events like this, ‘I don’t want to be here.’

“I don’t want to be locked into this routine,” he said.  “I think it’s important for us here to focus a little bit on the wording and the history and the need for the slogan and the organization, Black Lives Matter.

He also said you can be viewed “as suspicious and even dangerous” by law enforcement.

“That slogan is the most profound and base human cry for help that the Black community of this nation and the world can cry out to our fellow humans,” he said.

Horton explained, “We had a traffic stop—that probably shouldn’t have happened in the first place—but a traffic stop that went awry.”  He called it “unnecessary” that the public safety officials that keep our streets safe “be armed professionals.”  He said, “That makes no sense.”

He said, “What boggles the mind is that we would continue with the same systems that threaten the lives of Black and Brown people in this community every day.”

Horton related an incident that he had in Sacramento.

He explained that he had a job interview in Sacramento, dressed in his best clothes, and drove to Sacramento.  A couple of exits from where he needs to get off the freeway, a CHP car pulls up alongside him.  Then he pulls behind him—lights come on.

The CHP officer asked for his ID, but because he was wearing his dress clothes, he had forgotten his ID.  Horton leveled with the officer up front.

Morgan Poindexter noted that these conversations get derailed and we get caught up in these arguments about “should Daunte Wright not have turned back, should Philando Castille maybe not be carrying that gun to begin with lawfully, should Walter Scott not have run after getting pulled over for having a broken taillight.

“I’m tired of having those conversations,” she said.  “The conversations I have is why these situations even keep happening in the first place.”

She said, “I would personally rather see every person speeding, every registration lapse, than see another Black or Brown person be pulled over for no damn reason.”

She said that right now her registration is lapsed, “but I’m not worried that I’m going to die tonight.  And that’s messed up.”

She called for unarmed traffic enforcement.

Poindexter pointed out that Daunte Wright had a warrant for his arrest.  “That sounds serious,” she said.  “The messed up thing is that his warrant, his introduction to the criminal justice system was for simple marijuana possession.” 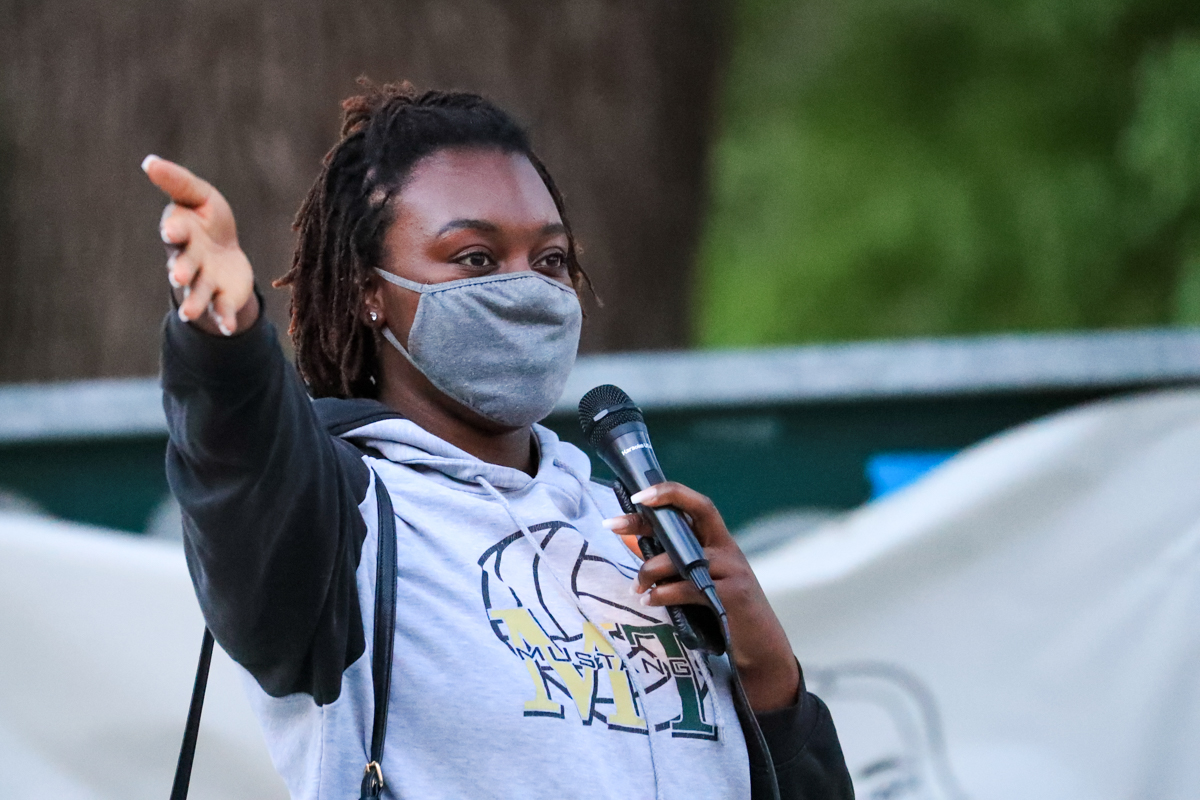 Finally Kelechi Ohiri spoke.  She went to UC Davis from 2014 to 2018, went to grad school and came back to work at UC Davis.

She called these moments “feel goods” and hoped “to draw us back to the reality of the moment.”

She said, “Whatever Black people experience due to anti-blackness has got to be something just short of being alive.  We are not experiencing full humanity.  We just cannot be.  This is a type of death—it’s a social one.

“I wake up every morning with the knowledge that I can be disappeared from this world for changing lanes or going to church or using counterfeit money.  Not because the penalty for these things is death but simply because I’ll be Black as I’m doing them.

“When I woke up to hear that Daunte Wright had been disappeared from this world by a police officer only miles from where Derek Chauvin is on trial for the murder of George Floyd it felt like I was alive only in theory. 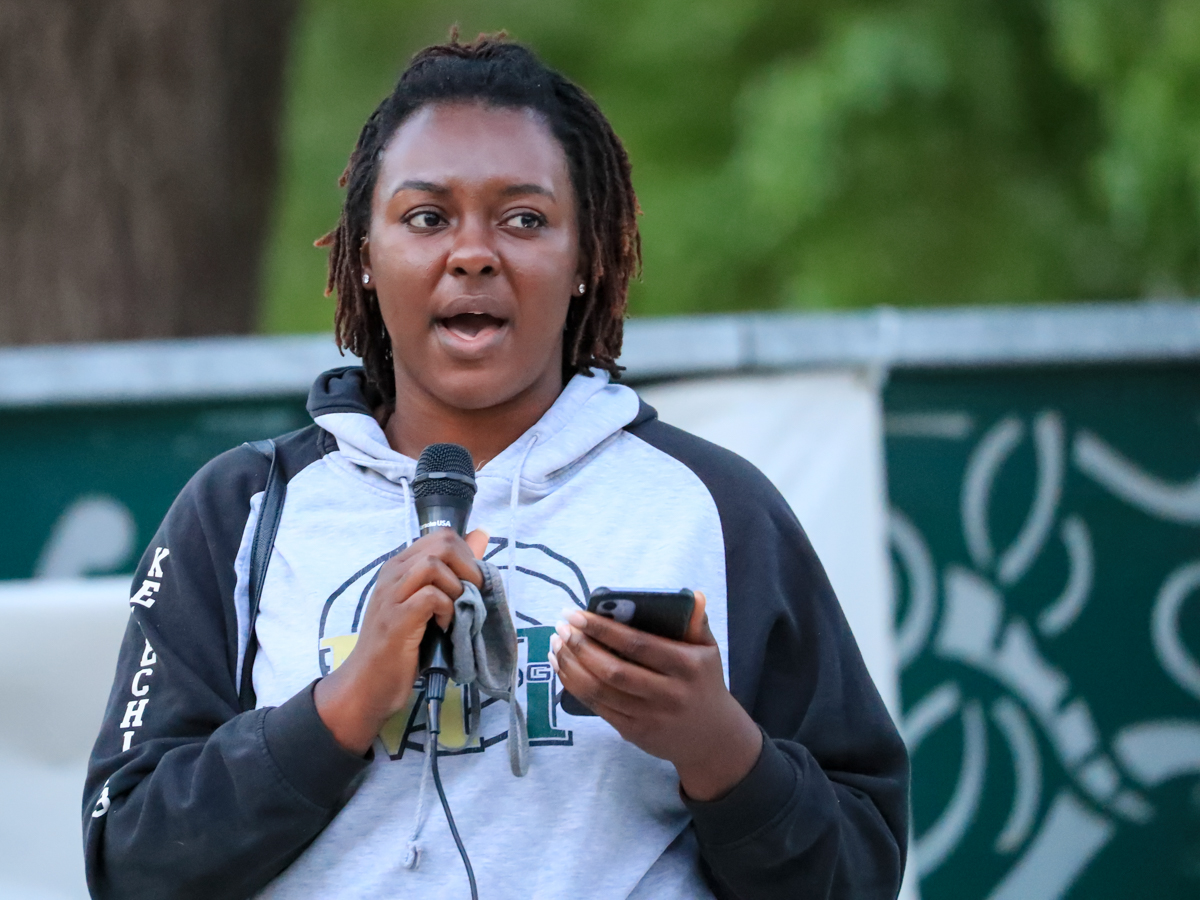 She said, “I’m starting to entertain the thought that survival is the project of anti-Blackness.  It feels like all we can do as Black people is build up the capacity to suffer in more creative ways and try to find some job in that cruel endeavor.”

She noted that even when Black people succeed—make money, graduate from UC Davis, “Often when we do it’s often at the expense of other Black people.” 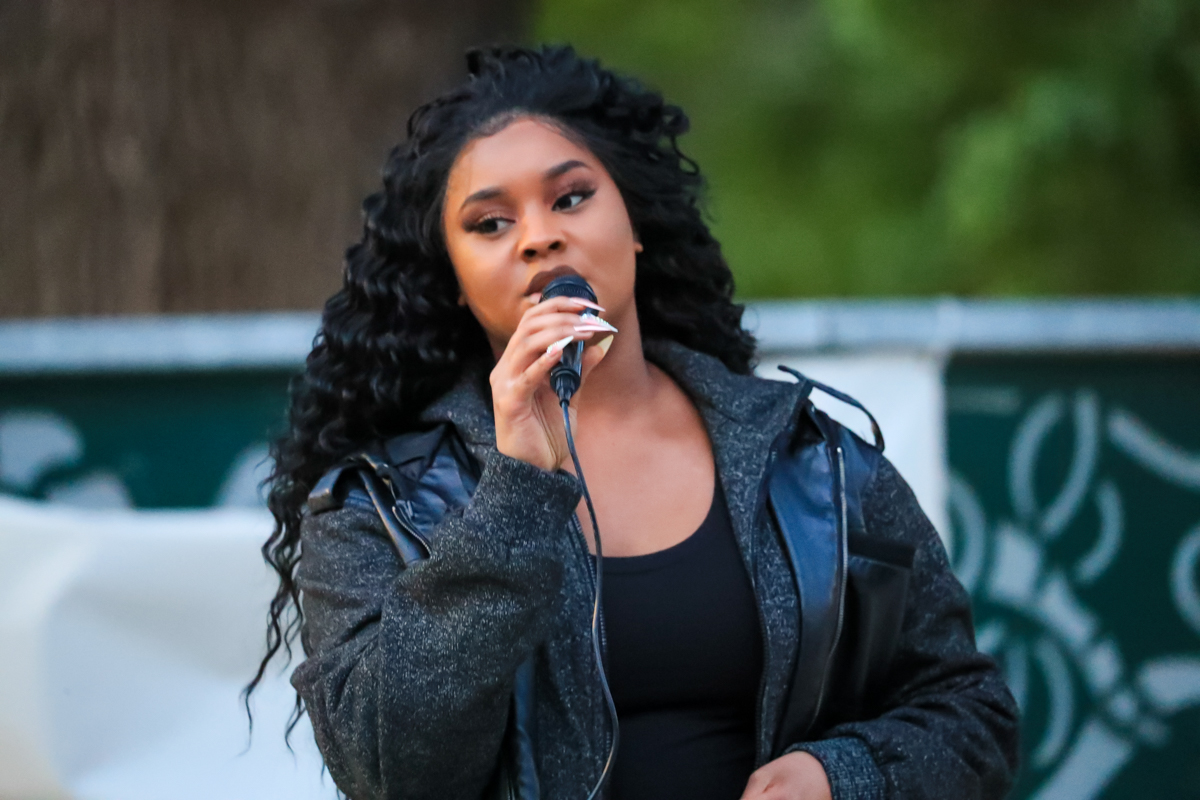 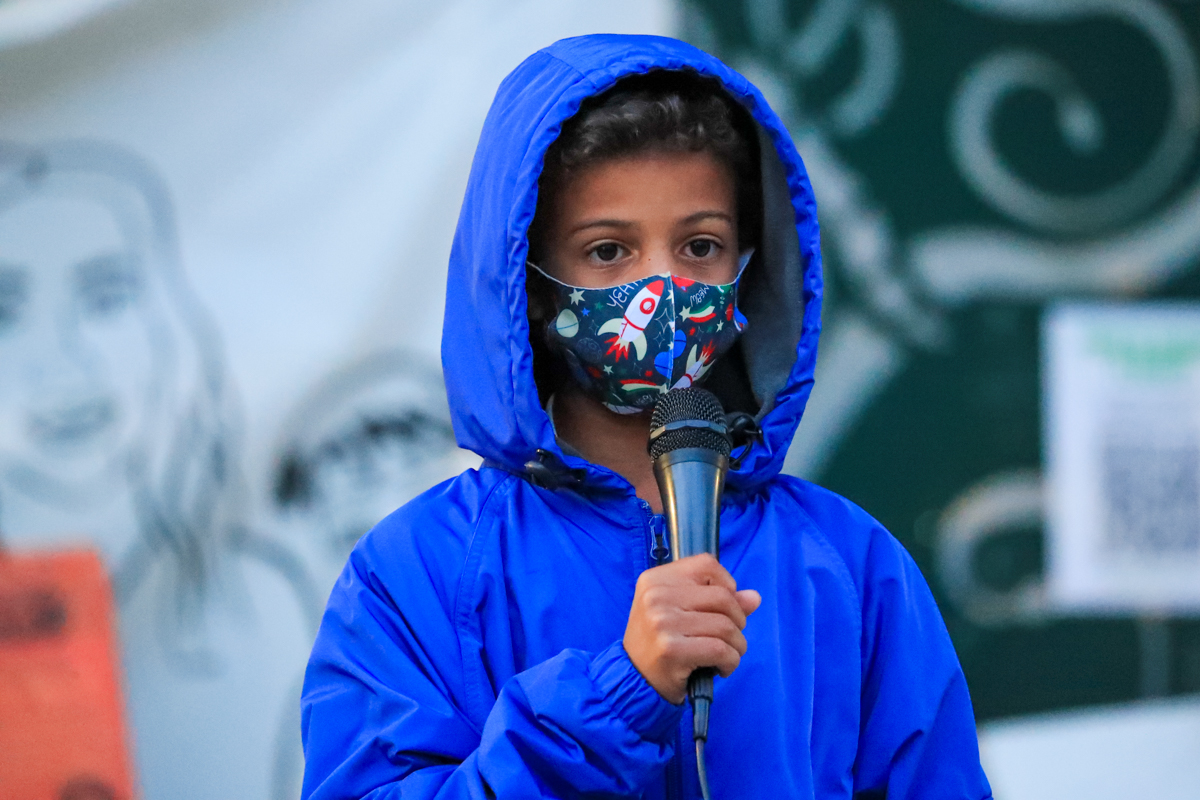 The event ended with another person singing Blackbird while a young boy spoke briefly from his heart.

“Black Lives Really matter,” he said.  “I don’t want to have a bad dream and wake up fearing that I’m going to get killed.  I’m not going to just sit there and do nothing.  I’m going to fight for my rights, not the police.”