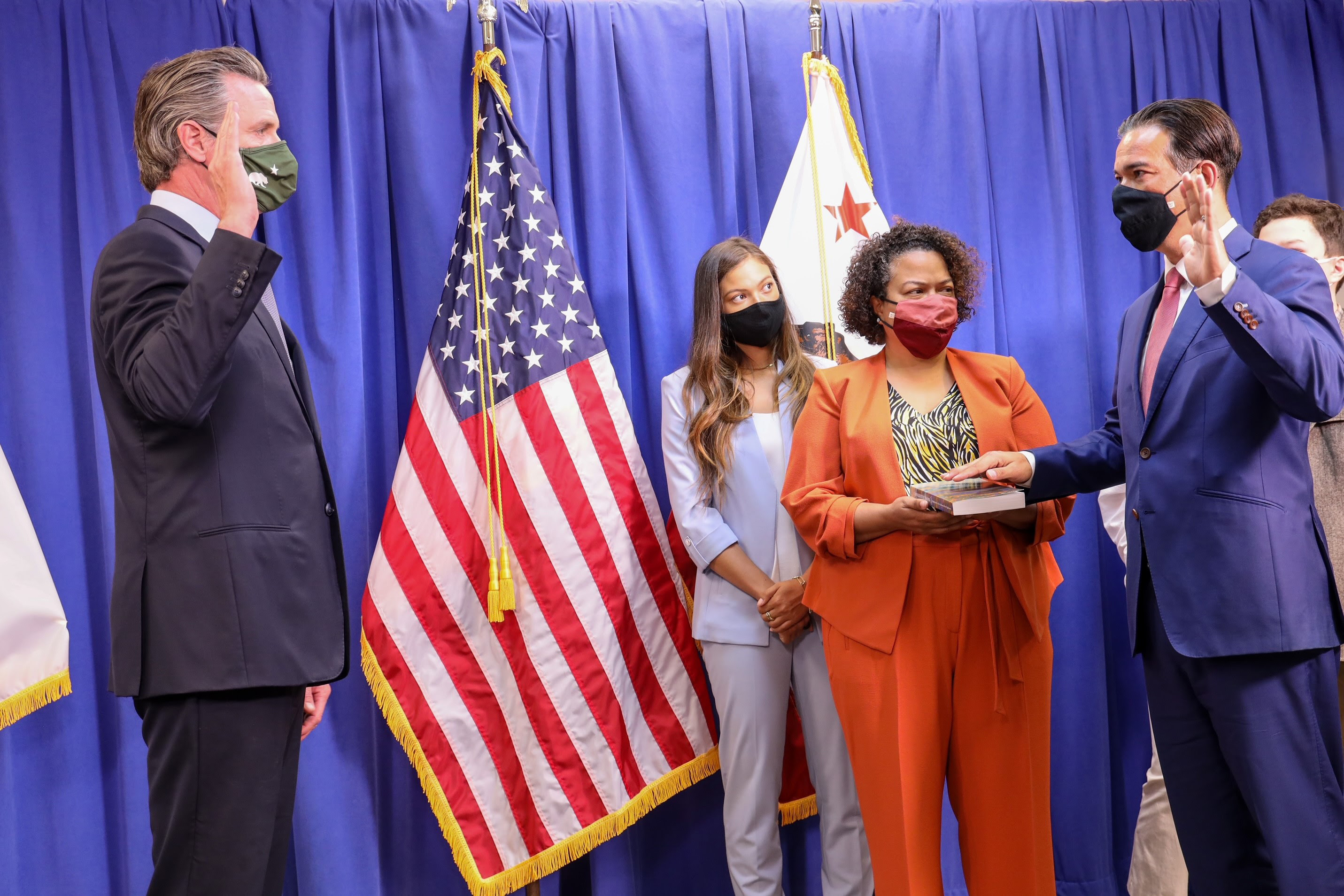 Sacramento, CA – Governor Gavin Newsom noted the big shoes that Rob Bonta will have to fill in a long line of very prominent former attorneys general—including the current Vice President Kamala Harris, past Governor Jerry Brown and with allusion to luminaries like Earl Warren, former seminal Chief Justice of the US Supreme Court.

Bonta is the first Filipino American in the state’s history to serve in the role and will be asked to take over a state Department of Justice that will be tasked with combating things like police misconduct and anti-Asian Hate Crimes.

Bonta was confirmed by the legislature on Thursday and selected by Governor Newsom to fill the position vacated by Xavier Becerra, who was recently sworn in as Secretary of the U.S. Department of Health and Human Services.

Bonta thanked the governor for the “honor of a lifetime” and promised, “I won’t let you down.”

He thanked his parents, saying “that’s where my story starts.”  His parents he described as fierce advocates on behalf of farm workers.  “Their fight for justice has been hardwired into who I am.  They’ve been at the forefront of powerful social justice movements—at Selma marching for voting rights, advocating democracy in the Philippines, standing with Cesar Chavez, Dolores Huerta and Philip Vera Cruz and the farmworkers.

“There are a lot of challenges we face across this nation,” he said.  “People too often feel that institutions serve the rich and powerful at the expense of everybody else.  We see hate on the

rise and Californians being hurt because of who they are.

“And too often, justice and accountability for those who harm others feel out of reach. As the People’s Attorney, I won’t back down when I see Californians hurt,” he said.  “Together, we will get justice for families cheated by multi-national corporations. We can defend communities ravaged by big polluters.  We can repair our broken justice system and we can attack the forces of hate and white supremacy.

“As Attorney General, these fights, your fights, will be my fights,” he said.

“California and the nation need leaders like Rob Bonta to meet this pivotal moment in our history with the courage, energy and tenacity it will take to shape a society more reflective of our values,” Governor Newsom said on Friday.

He said, “Carrying the lessons of his remarkable upbringing at the center of historic social justice movements, Rob has been at the forefront of courageous fights for racial, economic and environmental justice from day one.”

He added, “As Attorney General, Rob brings to bear the legal and moral authority to effectively engage a broad array of groups—community leaders, law enforcement, the Legislature and more—in a meaningful dialogue, so that California continues to build bridges and advance together in a direction that does justice to all our communities.”

Legendary Labor Leader Dolores Huerta issued a statement: “At an early age, Bonta learned about the values of social justice from his parents who worked for Civil Rights in the South and joined Cesar Chavez and myself as full-time volunteer organizers for the United Farm Workers.”

She said, “Rob Bonta has fought diligently throughout his career to correct the injustices affecting working families and Communities of Color. We are confident that Rob Bonta will work passionately to ensure our justice system protects all Californians. Si Se Puede!”

Journalist Van Jones said, “Rob is a lifelong leader in the fight to restore justice in California. I’ve known Rob for decades and he’s demonstrated time and again the commitment and capacity to reform critical elements of our criminal justice system including providing key support for the REFORM Alliance’s major probation legislation. I have every confidence that Rob will make a phenomenal California Attorney General.”

Bonta grew up in a trailer in La Paz, where his parents served at the headquarters of the United Farm Workers movement.

He saw his avenue for social change as being through the law and studied at Yale Law School and went on to work pro-bono, protecting vulnerable Californians from exploitation and racial profiling.

He served nine years as a Deputy City Attorney in the San Francisco City Attorney’s Office before running for local office in Alameda County.

In 2012, Bonta became the first Filipino American in California history to win election to the Legislature, representing Assembly District 18 in the cities of Oakland, Alameda and San Leandro.

Among his legislative accomplishments:

Outlawed For-Profit Prisons in California: Bonta authored legislation that made California the first in the nation to ban for-profit prisons and immigration detention centers.

Required Independent Investigations of Unarmed Deaths: Bonta co-authored the law that required an independent investigation when there is a death of an unarmed civilian by law enforcement.

Share:
Tags:Attorney GeneralDolores HuertaGovernor NewsomRob Bonta
Previous : Sacramento Police Chief Talks with Family of Police Killing Post-Chauvin Murder Verdict
Next : Speaker: “Racialized violence and its varying dynamics in those that have been rendered different stem from the same source of white supremacy.”