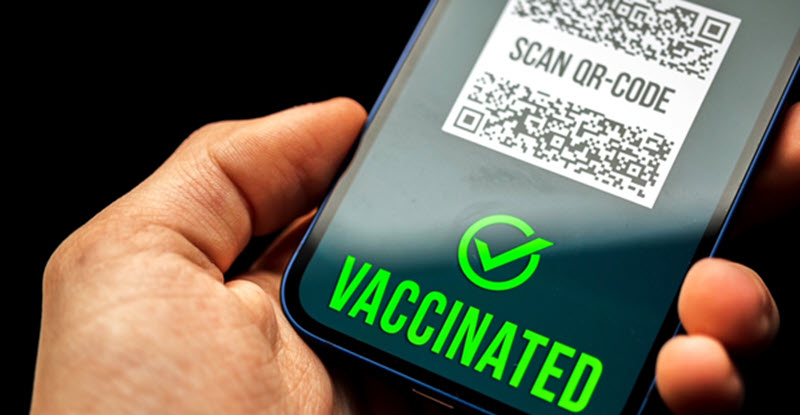 On April 14th, Assembly Member Kevin Kiley repurposed one of his pending bills on an unrelated subject (AB 327) to now prohibit state and local governments, and certain private entities from requiring proof of COVID-19 vaccination—so-called vaccine passports or digital health passes—from customers or recipients of services.

Vaccine passports are typically digital records—using a QR code or smartphone apps (or a written certificate for those who do not have smartphones)—used to show that a person has been vaccinated. According to the author, these records have raised concerns over privacy and civil liberties violations.

AB 327 would prohibit state agencies, local governments, and any other government authority from adopting or enforcing any order, ordinance, policy, regulation, or rule that requires an individual to provide as a condition of receiving any services or entering any place, documentation regarding the individual’s vaccination status for COVID-19 vaccine administered under an emergency use authorization. Presumably, the bill’s prohibition on COVID-19 vaccination documentation would not apply once a vaccine is approved through the traditional FDA approval process.

The bill would also impose a similar ban on any public or private entity that receives state funds through any means, including through grants, contracts, or loans.

Apart from the scope and application of AB 327 itself, the bill raises the broader issue of the pros and cons of vaccine passport requirements.

At this point, neither the federal government nor California has plans to create vaccine passports or other credentials. Private businesses, such as airlines, however, could require

verification of vaccination at some point in the near future.

Dr. Mark Ghaly, Secretary of the California Health and Human Services Agency, recently said that the state has no plans to develop its own vaccine passport but will be monitoring private sector development of passports for privacy, equity, and fairness. Ghaly has also reportedly said that the state is working through whether it makes sense in the highest-risk venues—large indoor, random-mixing environments—where there could be an expectation to have vaccine or testing verification.

Supporters of vaccine passports argue that they would help in reopening the economy and would not be needed once enough people are immunized to reach herd immunity. Senator Richard Pan, chair of the Senate Health Committee, where AB 327 will be heard, has argued that the bill would harm businesses trying to safely get customers back in their doors. Pan said, “You don’t want an outbreak that’s traced back to your venue. What we’re basically telling businesses is ‘Sorry, we’re denying you a piece of information that could allow you to reopen safely.’ Why would we want to stand in their way?”

Some opponents of implementing a system of vaccine passports have claimed that they violate constitutional rights and infringe on civil liberties. AB 327’s legislative declaration that “The United States Constitution does not authorize the federal government to mandate vaccine passports for COVID-19,” however, is dubious.

As long ago as 1905, the U.S. Supreme Court, in Jacobson v. Massachusetts, held that it is within the police power of a state to provide for compulsory vaccination to protect the common good. The Court ruled that the City of Cambridge did not violate the Constitution by requiring all adults to get a smallpox vaccine. Citing Jacobson, the Supreme Court, in Zucht v. King (in 1922), found that a school district could constitutionally exclude unvaccinated students from attending school.

Concerns with COVID-19 passports have been expressed by both conservatives and progressives. Conservatives argue that passports coerce people into accepting a vaccine in exchange for recovering basic liberties, or to justify prolonging restrictions. Progressives focus on inequities—the fact that not everyone has equal access to the vaccine.

The ACLU, for example, has expressed concerns with a digital system. They would oppose a digital system unless, among other things, it is not exclusively digital because it would increase inequality and disadvantage people who are low-income, have disabilities, or are homeless, as well as a large percentage of people over 65.

State requirements would have to include safeguards to protect civil liberties—having exemptions for medical reasons, or accommodations for employees with disabilities who telecommute, for example. Requirements would also have to be crafted to ensure that they do not apply when exercising civic rights, such as voting. The current Supreme Court would likely be sympathetic to arguments objecting to vaccine passports on religious freedom grounds.

Because it would impose a total ban on vaccine passports for designated public and private entities, AB 327 likely has little chance of passing in California’s Democratic-controlled legislature. The bill is currently in the Assembly Health Committee, but no hearing date has yet been set.