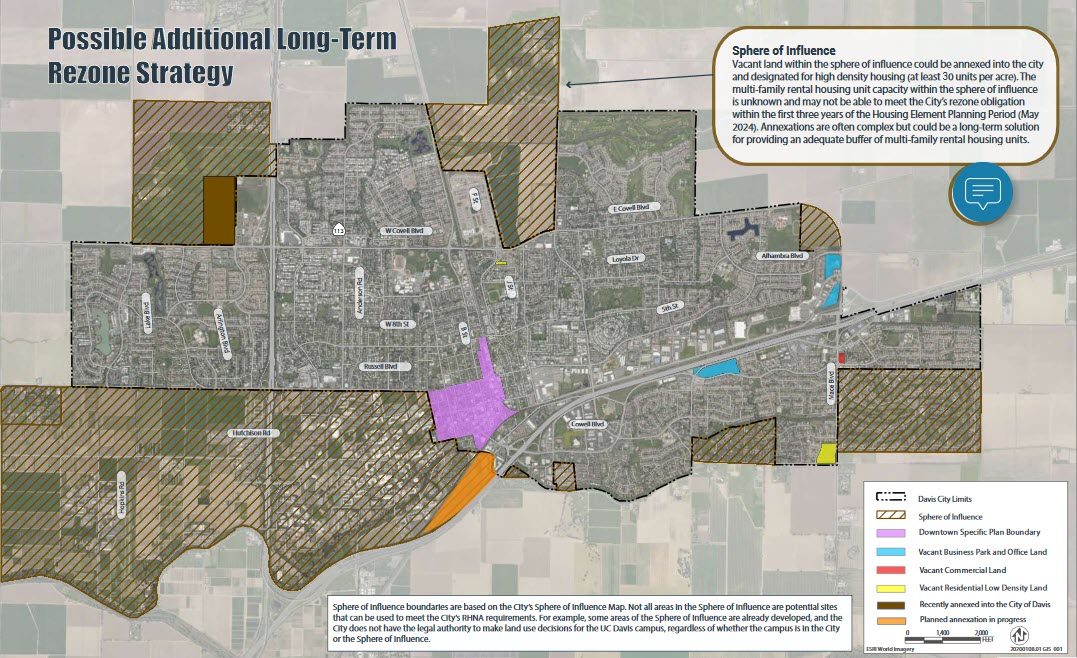 Davis, CA – Earlier this week, the Vanguard hosted a webinar on city housing needs.  It remains our view that filling the city’s housing needs over the next eight years will be increasingly challenging.

The city has put out a Housing Element virtual Community Workshop (here) that will remain active until April 2 (Friday of this week).

What that looks like is unknown.  Looking at past identified sites, most appear to be more aspirational in their ability to actually deliver housing.  However, as we have noted previously, the city, in order to meet the requirements of the Housing Element and the Regional Housing Needs Allocation (RHNA) does not actually need to build the housing.

But even with that lower threshold of legal requirement, AIM Consulting said, “The City now needs to identify additional sites to accommodate at least 230 more multi-family rental units. To meet State requirements, these sites must allow 30 dwelling units or more per acre of land.”

They acknowledge: “It will be challenging to find enough sites that will accommodate the amount of multifamily rental housing needed to meet the RHNA requirement.”

They write: “In order to meet the challenge of identifying sites for enough multi-family rental housing, the City is considering both short and long-term rezoning strategies. Rezoning is the

process of changing zoning laws, which determine how land can be used and developed.”

On the map, they identify a number of possibilities.

They note that the Downtown Davis Specific Plan “is expected for adoption in late 2021.  The plan would encourage redevelopment of the Downtown and could provide capacity for an additional 100 lower income units within the 2021-29 Housing Element Planning Period.”

They also identify some Residential Low Density Land—“Vacant land designated for Low Density uses could be redesignated to allow for high density housing (of at least 30 units per acre).  Approximately 12 acres of land has been identified and could provide approximately 230 lower income units.”

Business Park and Office Land—“Vacant land designated for business park and office users could be redesignated to allow for high density housing…   Approximately 30 acres of land has been identified and could provide approximately 600 lower-income units if fully developed for housing.  Or a smaller portion of the sites could be identified for housing.”

Commercial Land—“Vacant land designated for Commercial uses could be redesignated to allow for high density housing… Approximately 1.5 acres of land has been identified and could provide approximately 30 lower-income units.”

“The multi-family rental housing capacity within the sphere of influence is unknown and may not be able to meet the City’s rezone obligation within the first three years of the Housing Element Planning Period (May 2024).

“Annexations and often complex but could be a long-term solution for providing an adequate buffer of multi-family rental housing units.”

But the map may be somewhat deceptive.  For example, it notes that “not all areas in the Sphere of Influence are potential sites that can be used to meet the City’s RHNA requirements.”

In my view, the bigger challenge is not to find enough short- and long-term rezoning sites, it is to actually build the housing.  The good news is that falls outside of the legal scope of RHNA.  The bad news is that it remains fundamental to finding enough housing to continue to keep Davis affordable for a range of incomes and demographics.

As I have written previous, it is not clear where the housing will go at this point.

When we looked at the 2008 Housing Element report which was quite meticulous, most of the peripheral sites listed—Signature, Wildhorse Ranch, Nugget Fields, Covell Village, the Northwest Quadrant, Stonegate (west of) and Oeste Ranch—do not seem particularly likely at this point in the time.  Only a portion of the NW Quadrant has a property owner actively even in consideration, it would seem.

Infill?  We have the Olive Drive project that is obviously in the works, but not a very large project.  After that, we are probably looking at a bunch of projects that are relatively small.  The city, as we have reported, has about 64 acres of commercially zoned land, some of which might be appropriate for housing—though that will detract from needs for commercial development.

The city should probably do an analysis of immediately available land in the city for housing.  It is possible that things like DJUSD Headquarters or Civic Fields—both listed in the 2008 HESC (Housing Element Steering Committee) Report—get converted to housing, but, realistically, can you stake your planning on it?

That would seem to be an important distinction—housing we can build now versus housing that can be built if things line up correctly.

The downtown?  We are going to have a Downtown Specific Plan.  But there are three problems with putting housing in the downtown.  First, without redevelopment money, it is going to be a long and very slow process for owners to level large areas of the downtown and redevelopment them.  Second, the fiscal analysis shows that housing might not pencil out.  And third, even if market rate housing pencils out, affordable housing is going to be even more difficult to pencil out.

Peripheral?  There actually are not a huge amount of peripheral sites that can work at this point.  Voters have already turned down projects at Mace, Wildhorse Ranch and Covell Village.  A smaller proposal at Covell Village makes some sense, a project next to Bretton Woods in the NW Quadrant does, so does Wildhorse as well as Signature.

But other than perhaps the NW Quadrant site, I don’t believe that any of those spots are being actively considered.  And, even if it is considered, proposed, and approved by the council, all of it relies on the voters for final approval—which as we know is rather problematic.

Yes, these decisions lie somewhat outside of the realm of the Housing Element, but as part of community planning including the General Plan Update, they seem rather fundamental.

29 thoughts on “Commentary: We Need to Continue to Look At the City’s Housing Challenges”