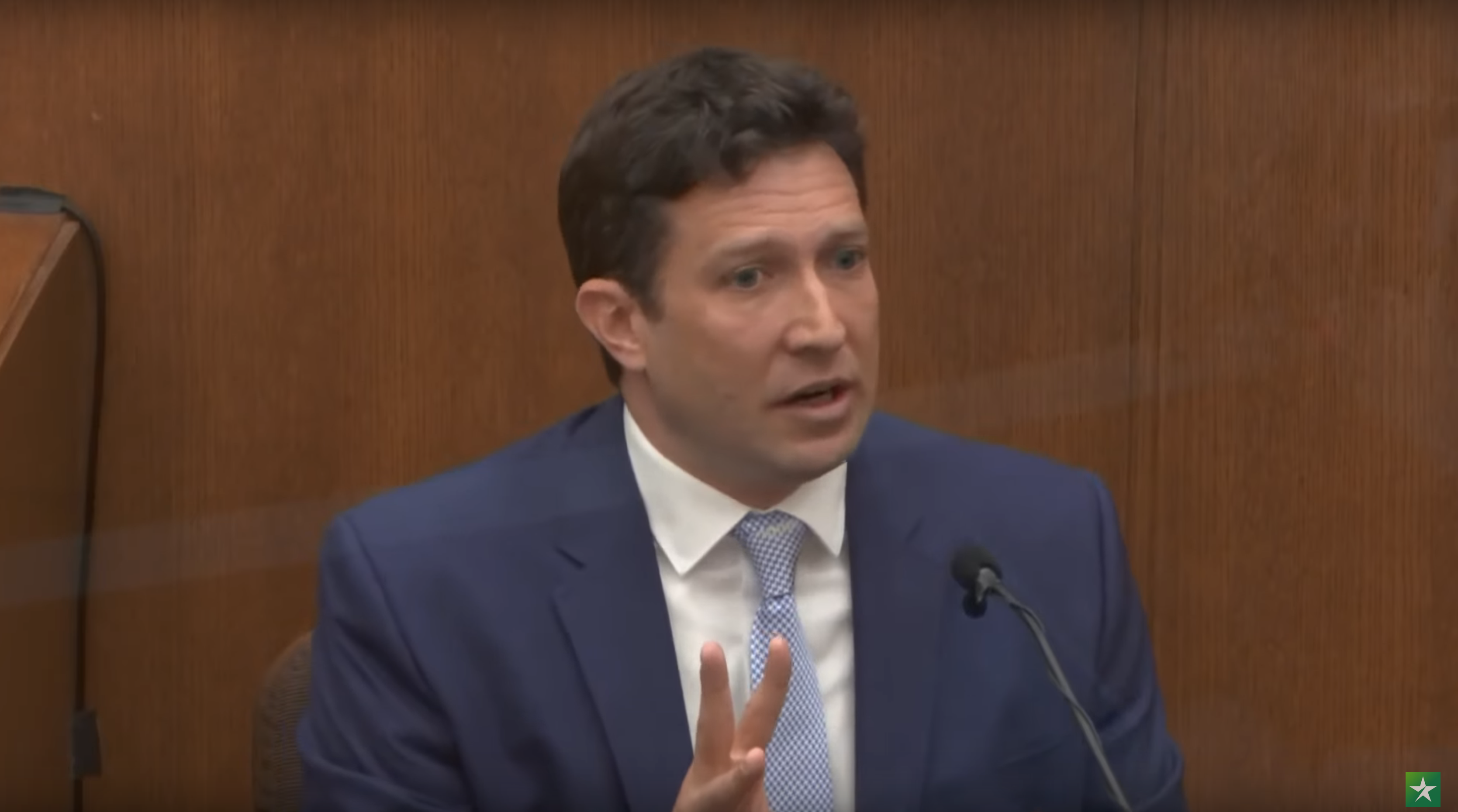 By Max Kennedy and William McCurry

MINNEAPOLIS, MN – In Day 11 Monday of ex-cop Derek Chauvin’s murder trial, multiple witnesses were called to the stand, including cardiologist expert witness, who testified George Floyd’s death was “absolutely preventable” and there were “several” factors that could have saved him.

And Floyd’s younger brother was later called to testify.

In his day job, Dr. Rich performs clinical care, educates other residents, and conducts clinical research on a variety of cardiovascular diseases. Most of the year, about 4-5 months, Dr. Rich is the lead cardiologist, caring for some of the “sickest heart disease patients in the hospital.”

Dr. Rich also sees patients in the outpatient setting and performs procedures where he measures pressures inside the heart and lungs. The doctor said that unfortunately, he works with patients that have some brutal heart condition, and “many do die.”

“One of the most important parts of my job, in fact, is to determine what’s wrong with wrong with a patient including, if they do actually die, how did they die,” states Rich.

Prior to providing an opinion on this case, Dr. Rich had the ability to look through Floyd’s medical records, watch all the videos that were provided, and review Floyd’s autopsy report. As he was formulating his opinion and creating his expert report, Rich reviewed journal articles as well.

Expanding on his opinion, Dr. Rich explains “in this case, it was truly the prone restraint and the positional restraints that led to his asphyxiation. In a nutshell, he was just simply unable, using all of his muscles and respiration, his chest wall, what we call accessory muscles of respiration which are extra muscles that trigger in the event that you are having trouble breathing.

“He was trying to get enough oxygen and because he was unable to because of the position that he was subjected to, the heart thus didn’t have enough oxygen which means the entire body is deprived of oxygen.”

In providing his opinion, Dr. Rich considered other causes of Floyd’s death, which he later ruled out. He considered on whether there could have been a primary heart contribution to his death and whether a drug overdose could have caused his death.

Dr. Rich told the jury that a primary heart contribution would be something that originated from the heart itself, for example, a heart attack where suddenly one of the arteries in the heart is blocked completely.

As he was coming closer to a conclusion, he reviewed three aspects of evidence: Floyd’s medical records, videos along with different angles, and Floyd’s autopsy report.

Upon Dr. Rich reviewed Floyd’s medical records, he wanted to see if there were any conditions that Floyd was diagnosed with. As he dug through his medical records he observed that Floyd suffered from high blood pressure, anxiety, and substance abuse.

Rich said that there was no evidence that showed Floyd had a heart disease or suffered from any cardiac problems and his EKG showed no “abnormal rhythms.”

Rich testified that when he was watching the videos of Floyd, he wanted to observe what he looked like, how he was talking, if he noticed any abnormal physical exams on how he was walking, and listening for Floyd saying he had any chest pain.

As he was watching the videos, Dr. Rich testified that he eventually sees Floyd go into cardiopulmonary arrest. He claims that he saw Floyd deteriorate and his voice became “less forceful” and muscle movements became “weaker” until eventually, he stopped speaking and moving.

In Floyd’s autopsy report, “there was no description of any platelets or clotting factors or anything that would block off an artery. None of the arteries were occluded, totally blocked off, which is what happens in a heart attack,” said Rich. He also testified that Floyd’s heart muscles showed no evidence of any injury at all.

When looking for a possible drug overdose, Rich paid close attention to fentanyl and methamphetamine in Floyd’s toxicology report. “As far as I can tell from reviewing all the facts of the case, I see no evidence, at all, to suggest that a fentanyl overdose caused Mr. Floyd’s death,” Rich testifies.

Rich states that he came to this conclusion because it appeared that Floyd was a chronic user of drugs, particularly opiates and he likely developed a high degree of tolerance. He refers to a medical visit Floyd had in the past where he told the medical team that he consumed eight Percocet’s in two hours.

The second reason, in support of his conclusion, was that he didn’t see any signs of an opiate overdose when he reviewed the videos.

“I believe that Mr. George Floyd’s death was absolutely preventable,” states Dr. Rich, noting there were several acts that could have been taken to save his life.

“The first, of course, was to not subject him to that initial prone restraint positioning he was subjected to, that is first and foremost, so if that was not the case I don’t think he would have died,” Rich provides in his first reasoning.

The second action that should have been taken, according to Dr. Rich, comes when he hears one of the officers say, “I think he’s passing out.”

“That would have been an opportunity to quickly relieve him from that position of not getting enough oxygen, perhaps turn him into a recovery position and allow him to expand his lungs again,” provides Dr. Rich.

Dr. Rich also testifies that he heard an officer, twice, ask Chauvin if Floyd should be turned onto his side after he had no pulse. Rich then testified that Chauvin’s answer was “no, just leave him.”

After Dr. Rich, the prosecution called Floyd’s younger brother, Philonise Floyd, as a character witness. Philonise Floyd spoke about his shared childhood with George Floyd, including playing video games together and George Floyd’s love of sports.

“He was so much of a leader to us in the household. He always made sure we had our clothes for school. He made sure that we all were going to be at school on time. Like I told you, George couldn’t cook but he made sure you had a snack in the morning,” said Philonise Floyd. “He knew how to make people feel better.”

Philonise Floyd also described George Floyd’s “unique” and “loving” relationship with their mom. “He was a big mama’s boy,” said Philonise Floyd. “Being around him he showed us how to treat our mom. He loved her so dearly.”

Later in the afternoon, the prosecution called Seth Wane Stoughton, a current professor of law and criminology and former Florida police officer.

Based on his expertise, and his review of available footage and documents, Stoughton found “both the knee across Mr. Floyd’s neck and the prone restraining were unreasonable, excessive and contrary to generally accepted police practices.”

He continued, “No reasonable officer would have believed that was an appropriate, acceptable or reasonable use of force.”

Stoughton used several exhibits to explain his testimony, including three-dimensional representations of the incident, and a graphic highlighting how force was used against Mr. Floyd over time. The prosecution also played several clips of footage from officer-worn body cameras, that Stoughton then discussed.

Stoughton noted that police may use force against an individual who presents a threat, but that Floyd did not meet that criteria at the time he was placed on the ground.

Stoughton also discussed the risks of holding someone in the prone position for an extended period of time, in particular mentioning the risk of asphyxia, or oxygen deprivation. “This has been something that has been very well known in policing for at least 30 years,” he said.

Stoughton said a reasonable officer would “absolutely” have been aware that Floyd was expressing medical distress, and would have an obligation to take that into account.

“The failure to render aid to Mr. Floyd both by taking him out of the prone position and by rendering aid as his increasing medical distress became obvious was unreasonable and contrary to generally accepted police practices,” he said.

Nelson then cross-examined Stoughton, emphasizing through questioning that officers must respond to the “totality” of the arrest circumstances, that officers must rely on training, and attempting to show that “reasonable” officers could vary in their response to a given situation.

“On this particular point, no,” said Stoughton, referring to officers placing Floyd in the prone position while handcuffed.