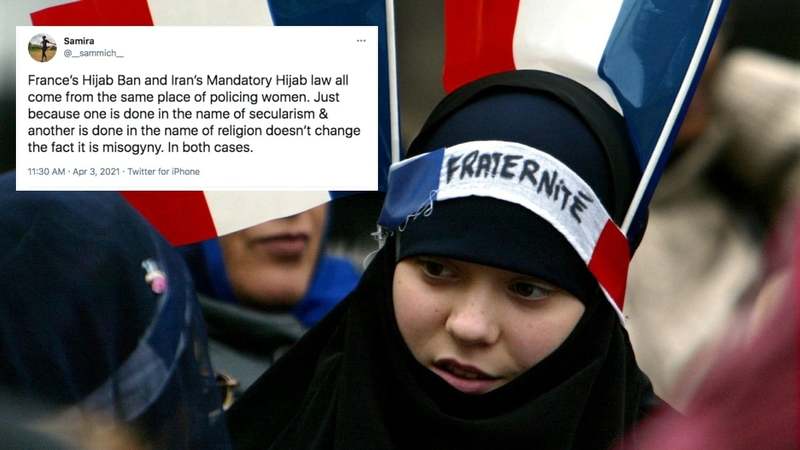 The French Senate has sent in a hijab ban to the National Assembly on Tuesday, which could force Muslim girls to hide public displays of religious attire.

The bill was passed to the French Senate on Feb. 16, 2021, with a vote of 347 to 151 with 65 instances to decline the vote. A large part of the bill that has to do with the ban of hijab is ensuring the ‘dignity: of the people of France but specifically women. This part of the bill would ban the usage of the “virginity certificate” as a means to ensure the virginity of young Muslim girls. It also would crack down on any measure that would inhibit the ‘dignity’ of women, which on March 30 included the ban of the hijab.

However, according to Jean Yves Camu, a political scientist, this is a political move being made by the conservative right-wing political party of France. Camu also states that the likelihood of these laws being passed in the National Assembly, the French pre-eminent parliamentary chamber, are slim to none and are a ploy to win back its voters.

“The conservative right sees that some of their previous voters have switched to the far right, so they try to win back those voters,” stated the president of Observatory of Political Radicalism. “If they want to win back those votes, they have to propose legislation that is at least as xenophobic”.

The “Separatism Bill” began with several different provisions before it was amended to include the ban of the hijab. This included mandatory school attendance by the age of three to prevent homeschooling. This is important because it targeted mainly girls that were believed to be going to religious-based schools where classes mostly consisted of prayer.

Another provision was making it punishable to spread someone’s personal information online when their life is endangered with a fine of about €45,000. This provision specifically has to do with the beheading of a French middle school teacher by an Islamic radical, after he shared a caricature of Mohammed. His personal information was leaked online and ultimately led to his death.

The bill was readily passed by the French Senate after this tragedy. The bill hopes to fight Islamic radicalism and strengthen French values.

France is not the first country to propose laws like these as Switzerland back in March voted to ban face coverings such as the burka and niqab. These laws were proposed by the Switzerland right-wing party, Swiss People’s Party.

Although Switzerland only contains a small population of Muslims it still is an important reaction to the Islam Radicalism that has occurred in Europe and these countries’ willingness to promote their secularism.

These countries are adamant in wanting to maintain their secularism and prevent women from having their freedom stripped away by religion. However many of these laws are targeted toward Islam and not any other religion. This has brought up many concerns to the Muslim community in these countries, as they feel that their religious freedom is at risk.

Michelle Funes is a second year at UC Davis. She is currently an English major and hopes to double major with Communications. She is from Southern California, more specifically Covina.