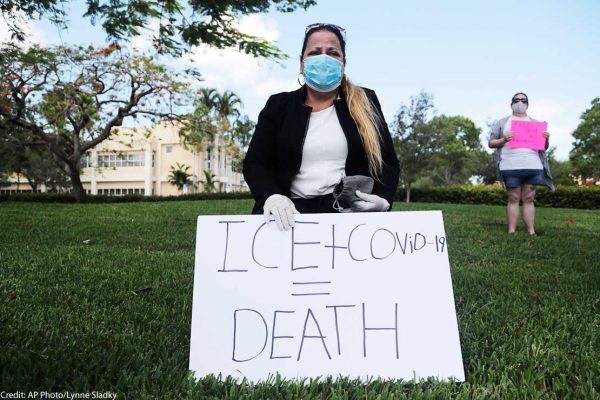 The conditions highlighted in this report are shocking, but not unusual. ICE detention is plagued by dangerous conditions and abuse of detained people.

By Eunice Cho and Yvette Borja

Last week, the Department of Homeland Security’s internal watchdog agency released a damning report that shed new light on dangerous conditions at La Palma Correctional Center, an Immigration and Customs Enforcement detention center in Eloy, Arizona. The Office of Inspector General’s investigation confirmed the dangerous use of force, abuse, and lack of medical care at La Palma as COVID-19 swept through the facility and revealed troubling details about ICE’s mismanagement of detention during the pandemic.

In unusually strong language, the OIG concluded that conditions at La Palma “threatened the health, safety, and rights of detainees,” and “created an environment of mistreatment and abuse.”

The OIG’s report confirms that the facility failed to provide basic protective equipment to detained people, did not require guards to wear masks, and “did not enforce ICE’s COVID-19 precautions, including facial coverings and social distancing,” noting that “this failure may have contributed to the widespread COVID-19 outbreak at the facility.” Notably, La Palma had one of the largest COVID-19 outbreaks of any immigration detention facility in the country, with over 700 people eventually infected with the virus.

Most shocking is the OIG’s confirmation of abuse at La Palma. In April 2020, detained people at La Palma held peaceful protests to request protective equipment, such as masks and hand sanitizer, to protect themselves from the spread of COVID-19. However, in response, “staff deployed chemical agents from the ceiling,” deployed “pepper spray from handheld devices,” and launched pepper balls against detainees. Facility officials later punished detainees with lengthy stays in solitary confinement. As a letter that we sent to ICE on behalf of detained protestors reported, one CoreCivic guard told the protestors: “I am locking you down because it is my job. I don’t care who lives and who dies.” 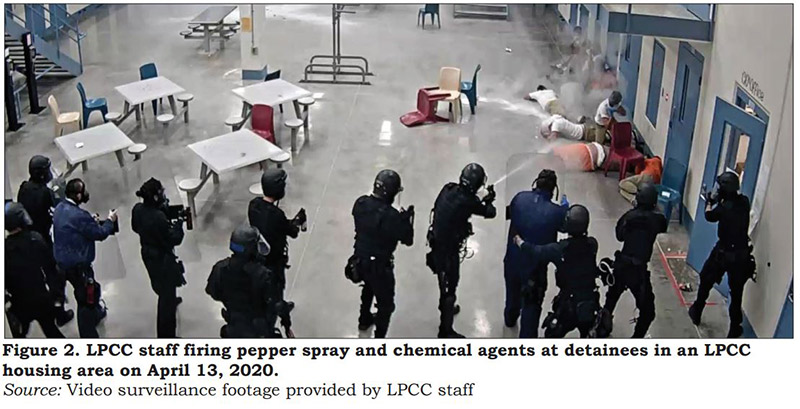 The OIG’s report also confirms that La Palma failed to meet baseline medical standards, leading to the “risk [of] endangering the health and well-being of detainees entrusted to their care.” Indeed, the OIG found that La Palma’s medical unit was “understaffed, operating below requirements.” These shortages created delays in critical care, refills for essential medications, and medical visits. The report also found failures regarding the grievance system and critical communication for detained people, including failure to provide people with deportation officer visits or call schedules. Most grievances reviewed received delayed responses or no response at all. Despite this, ICE has maintained that they have taken responsibility for the well-being of those detained in their custody.

Unfortunately, the abuses underlying the OIG’s report at La Palma are not uncommon. Instances of the use of force, including pepper spray, pepper balls, and spray grenades, have increased against immigrants in detention during the COVID-19 pandemic. The number of people who died in ICE custody during 2020 was the highest it has been in 15 years.

La Palma became an ICE detention facility in 2019, as part of the Trump administration’s rapid expansion of the immigration detention system. After California’s criminal justice reforms eliminated its use of out-of-state prisons, CoreCivic set out in search of new people to fill its beds at La Palma. As the Government Accountability Office concluded in a recent report, many of the new facilities opened during the Trump administration lacked justification for use, and were awarded contracts that provided unnecessary “guaranteed minimum bed” provisions — payments for beds, even if not in use.

As the OIG’s report demonstrates, immigration detention facilities are plagued by dangerous conditions and abuse of detained people. The Biden administration can act quickly to terminate existing contracts for detention facilities, starting with facilities that have serious records of abuse, were opened without clear justification, or are in remote locations. There is no time to waste: It is time to put an end to ICE’s detention machine.

Share:
Tags:ACLUArizona DetentionCoronvirusICE DetentionLa Palma
Previous : Looking Back: Life’s Lessons from Exonerees
Next : Sunday Commentary: Not Everything Is about Race – But Too Much Still Is