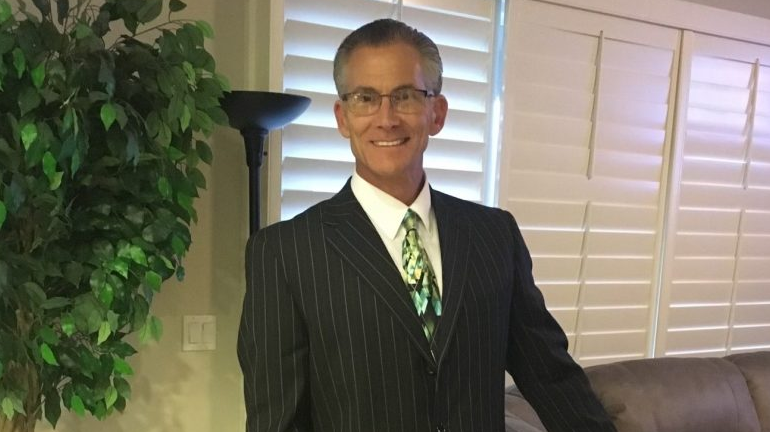 Riverside County, CA – On a Friday morning, eleven Riverside County deputies raided the home of Jeff Perrotte, on parole for his role in the 1992 death of Frank Sinatra’s close friend, Jilly Rizzo.  He had been released in 2015, but was reincarcerated from 2016 until July of 2020 for a technical violation of parole.

Perrotte was reported to be in possession of two unopened beer cans in 2016, which led to his reincarceration until just last summer.

On April 8, the Vanguard published a lengthy expose on the bizarre case.  Days later, Perrotte reported that parole agents were stepping up harassment of him, and his belief was that this was in retaliation for his article.  That led to his arrest on May 14.

The Vanguard spoke to attorney Laura Sheppard, who represents Perrotte in his matter now and absolutely believes that Perrotte is being retaliated against.

She noted that he is a guy “with some money and some education and so he doesn’t bend over backwards to kiss their butts.”

Sheppard explained, “Law enforcement generally and parole officers specifically like to be the power figure.  They want to have all the control.  Jeff’s not like that and in many ways he carries himself with a higher status than they do and that pisses them off.

“They went out of their way to violate him over something little,” she said.

Sheppard noted that they violated him back in 2015, and in the process of that “they have stomped on his rights.”

The result of that is multiple lawsuits and habeas filings.  “They lied about him to get that parole violation.  It’s now personal—because he’s pointing out the individual parole agents who lied.

“They were just looking for any excuse to violate him,” she said.

Two days before his arrest, he was supposed to go on a business trip.  They told him that he couldn’t go, he had to go into the office.

His response: “So you’re going to get me fired for missing this work trip?”

From her standpoint, the relationship between Perrotte and the parole agents has become antagonistic.

The incident that led to Perrotte’s arrest began with a tip that Perrotte might be involved in selling cell phones to people in the prison.

“That’s total BS,” Sheppard said, but it did get the parole agents to look up Perrotte’s phone calls into the prison.  “They found a call between him and another inmate.”

Sheppard described the actual call as “totally innocuous.”  A ten-minute conversation where Perrotte and the incarcerated person were simply shooting the breeze.

However, Perrotte, it turns out, has a parole condition that says he can’t talk to gang members.

“That parole condition is unconstitutional,” Sheppard believes.  The law, she explained, says you can only have parole conditions if they have some rational connection to the parolee’s crime.  Perrotte has never had any gang affiliations and his case was a drunk driving case.  “Jeff has never had any gang involvement whatsoever, either in prison or out of prison.  They’re not allowed to even put that condition on him.”

They knew about this and were in the process of attempting to remove that condition.  But, in the meantime, the guy from prison that Perrotte spoke with, unbeknownst to him, was validated as a gang member ten years ago.

“So that’s the violation,” she said.

They raided his home to arrest him.  They spent hours tearing apart his home looking for stuff.  In the process they found a traffic ticket from February.  There is no violation there and, in fact, he had paid the violation and signed up for traffic school.

“But the violation that they are alleging is that he drove the car for non-work related purposes,” she said.  “He didn’t immediately call his parole agent” when he had law enforcement contact.

They arrested him at gunpoint and put him back in jail, which his attorney says they were not obligated to do.

Sheppard thinks these violations are even weaker than the last one, which she noted was more closely related to his original DUI crime.  In that case, they found two unopened bottles of beer in his vehicle.  “He hadn’t drunk it but still there’s a little connection there,” she said.  “Here’s it’s completely BS.”

She has evidence showing that he was working, and so he did have a right to drive.

The judge, if they find a violation at the evidentiary hearing, then could put him back into prison.

“It’s a legitimate possibility, but I’m going to fight tooth and nail against it,” Sheppard explained.

8 thoughts on “Are Parole Agents Retaliating against Man Who Spoke Out in Vanguard Article?”