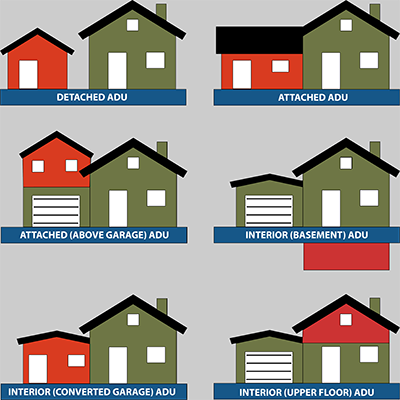 Accessory Dwelling Units (ADUs)—also called granny flats, in-law units, secondary units, etc.—are an option for adding much-needed affordable housing in California. An ADU is a smaller (maximum of 1,200 square feet), independent residential dwelling unit located on the same lot as a stand-alone (i.e., detached) single-family home. ADUs can be converted portions of existing homes (i.e., internal ADUs), additions to new or existing homes (i.e., attached ADUs), or new stand-alone accessory structures or converted portions of existing stand-alone accessory structures (i.e., detached ADUs). Junior ADUs (JADUs) are ADUs that are no more than 500 square feet and exist within single-family homes and have cooking facilities including a sink and stove but are not required to have a bathroom.

Among other things, ADUs have the potential to increase housing affordability both for homeowners and tenants, expand the range of housing options within the community, and enable seniors to stay near family members as they age. In recent years, ADUs have grown exponentially in number as more cities, counties, and homeowners seek solutions to increase the supply of affordable housing. The City of Davis permitted a total of 32 ministerial (expedited/nondiscretionary) ADU projects in 2019.

Recent legislation has encouraged ADUs as a tool to address California’s housing crisis. The law places limits on the ability of cities and counties to regulate ADUs by specifying required development standards and streamlining the approval process by requiring that approvals be more ministerial.

Recognizing that its current ADU ordinance is now out of compliance with State law, the Davis City Council, at its May 4th meeting, will hold a public hearing on proposals for an updated, replacement ordinance to conform the city’s ADU ordinance to current state law.

This session, a number of bills have been introduced in the Legislature related to ADUs. These bills, if enacted, would not be effective until January 1, 2022 (or January 1, 2023 if a two-year

bill). Nonetheless, to limit the need for subsequent modifications to the City ordinance, it would be advisable for the Council to review these bills to identify potential future requirements or prohibitions in state ADU law and consider adopting such provisions as part of its new ordinance, as deemed appropriate and authorized under current law.

Following is a brief rundown of some of these pending bills: