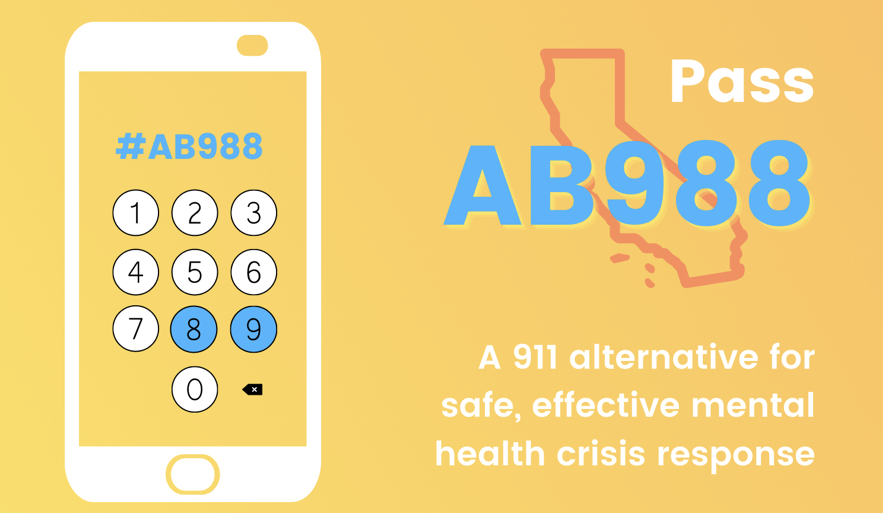 Mental Health Is More Important Now Than Ever.

One in 6 Californians now live with a mental illness and suicides have been steadily climbing, increasing by 35% nationally over the last two decades. The COVID-19 pandemic, compounded by societal stressors that have been pervasive in previous years, has had a substantial impact on all our lives. It has disrupted work, education, health care, the economy, and relationships, with some groups more negatively impacted than others. For decades, California has failed to provide necessary mental health services amidst a growing mental health crisis. As a result, the police and the criminal justice system as a whole often serve as the state’s default mental health provider. Currently, 10% of law enforcement agencies’ budgets – and 20% of staff time – are spent responding to individuals with mental illness.

One in three U.S. adults reported experiencing depression or anxiety since the pandemic began. Coupled with the fact that, on average over the last five years, three people have died every day by the hands of police, it is clear to see that mental health treatment and advocacy are needed more than ever. Of all the individuals killed in police-involved shootings since 2015, ~25% had a known mental illness, with black men dying at disproportionate rates. This is a direct consequence of our overreliance on law enforcement responses to public health crises.

We need to act now to help those who need it, and to prevent a much more serious and widespread mental health crisis.

In 2019, Miles Hall, a 23-year-old African American man living in Walnut Creek, was in the midst of a schizophrenic mental health crisis when his family called the only source of help available – 911. Despite being familiar with Miles’ condition, the officers resorted to lethal force within a minute of their arrival.

Law enforcement officers are not mental health experts and should not be expected to serve this role. A better system for Miles and all Californians is possible – one that leads with treatment, not law enforcement.

In response, California Assemblymember Rebecca Bauer-Kahan, representing District 16, has introduced AB 988 – The Miles Hall Lifeline Act: Suicide and Mental Health Crisis Hotline which will implement the national 988 system in California so that all people experiencing a mental health crisis are able to receive life-saving care.

This bill will designate crisis hotline centers to provide intervention 24/7 through call, chat, and text. These call centers will be able to deploy crisis services – such as mobile crisis teams and crisis stabilization services. To ensure long-term success, centers will also follow up with callers to ensure they receive ongoing care. The crisis hotline centers will also work with the National Suicide Hotline to provide over the phone immediate support for individuals calling in with suicidal thoughts. Additionally, this bill will establish a monthly fee on mobile phone and landline bills – similar to a fee charged for 911 – to fund the 988 system.

When the Sacramento County Board of Supervisors last met to discuss the implementation of an Alternative to Law Enforcement Response Program to Mental Health Crisis and Quality of Life Calls, County Staff made it abundantly clear that they were eagerly depending on AB 988 to be approved by the State in order to utilize those funds for a similar program to be implemented county-wide. They are also thirsty to tap in to federal funding made available by the American Rescue Plan Act of 2021, which will provide one-time grants to establish mobile crisis units and a five-year reimbursement structure for 85% of the costs, with a match and county responsibility for 15% of the cost of mobile crisis teams.

If California does not act, “988” will still go live no later than July 16, 2022, callers to the existing 800 number or to “988” will be merged, and the suicide prevention hotline and call centers will continue to operate as they currently do. California has 13 centers unevenly distributed throughout the state which were reported to be able to answer 85% of the calls received through the 800-number last October to December. It’s been reported that calls are likely to increase by 30% as a result of the launch of “988”. When a local call center is unable to answer, the call is routed to one of the National Suicide Prevention Lifelines backup centers. When calls are re-routed to centers out-of-state, California callers in crisis often wait two to three times longer, receive fewer linkages to effective local care, and are more likely to abandon their calls. They could also end up getting a response from a law enforcement agency, which is one of the main things this bill is attempting to avoid.

AB 988 was heard in the Health subcommittee of the State Assembly on 4/20/21, where it passed through with a vote of 11-2. On 4/28/21, AB 988 was heard in the Communications and Conveyance subcommittee, where it passed unanimously. The only opposition that was voiced was by the California Cable & Telecommunications Association, California State Council of Service Employees International Union (SEIU California), and Consolidated Communications Services, who all expressed concern that telecommunications customers would bear the cost for provision of mobile crisis and stabilization services through an additional surcharge. They voted to oppose unless the bill is amended to reflect a cost estimate cap to be no more than 80cents per line, per month, with which Assemblymember Bauer-Kahan agrees. It is important to note that those consumers who qualify for Lifeline discounted and prepaid communications services will be exempt from this surcharge, as they currently are exempt from other existing communications surcharges.

Now that AB 988 is scheduled to be heard in the Assembly Appropriations Committee on this Wednesday May 19, 2021 the California Cable and Telecommunications Association is ramping up their dissent, expressing concern about the surcharge being used to help cover the cost of providing mental health crisis services and demanding that the cost estimate be capped at no more than 10cents per line, which would completely undermine the intent of the bill.

It’s important to note that there are a number of end-user surcharges collected by the telecommunications carriers to fund universal service public programs. The carriers, in turn, remit the surcharges as directed by the public utilities commission. Six programs have been created by the Legislature to address myriad needs of many communities to access telecommunications services. Collectively, the programs result in surcharges of 7.749% of a customer’s telephone bill as of December 1, 2020.

In its current revised draft, AB 988 states that the bill would provide that the 988 surcharge for the years 2022 and 2023 is set at the same amount as the 911 surcharge. The current 911 surcharge rate is 30cents per line, per month. Thirty cents, y’all. An additional 30cent surcharge per month to provide a system where people experiencing a mental health crisis get the treatment they need and deserve. Where armed police officers don’t show up as first responders. Where mental illness is no longer criminalized. That’s less than $10 a year. I’m down with that.

Let your voice be heard. Call and/or email your State Assemblymember to express your strong support of AB 988 – the Miles Hall Lifeline Act to establish 988 as the new 3-digit alternative to 911 for mental health crises: http://bit.ly/AB988Assemblymembers

You can also sign the petition from the Miles Hall Foundation to urge lawmakers to pass AB 988 here: http://bit.ly/AB988Petition

Dr. Corrine is a licensed clinical psychologist and a licensed marriage & family therapist. She has over 20 years of experience providing mental health services in a variety of settings (i.e., school, community mental health centers, group home, intensive outpatient treatment program).  Social justice has always been a major interest and her passion for activism was ignited after the killing of George Floyd. Since then, she has volunteered with local racial justice organizations to foster awareness of social injustices and to promote community solidarity.