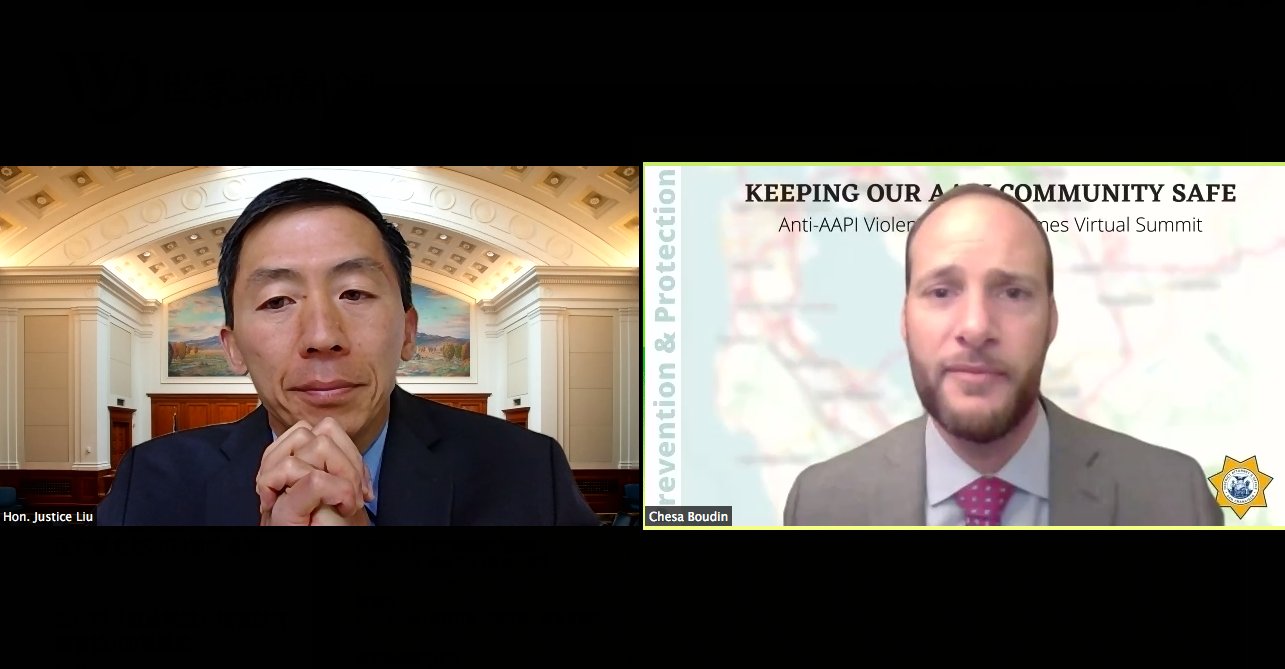 The summit began with an inspiring and powerful poem titled “What Form of Madness” written and performed by Janice Mirikitani, former San Francisco poet and co-founder of Glide Memorial Church.

In response to the Trump administration’s harmful rhetoric, Mirikitani finished her poem saying, “blame us for deadly COVID, imported from China…incite more race hatred, it’s madness…we will tear down the walls of fear and build bridges of love.”

Keynote speaker, Associate Justice of CA Supreme Court, Justice Liu, was introduced to discuss his personal experience growing up as an Asian American boy and the ways in which he saw racism play out in his childhood.

Although Justice Liu has never experienced extreme forms of violence, he said he has experienced “casual

everyday racism that has been experienced by really every Asian American.”

These microaggressions happened ever since he was in elementary school and have continued on today as he works at the state level.

“What proceeds the violence…is really a set of social norms and if it is normal to…dehumanize people based on their race then we shouldn’t be surprised…of the consequences that come from that,” he said.

The fact that children where he was growing up were never called out for their hurtful words and actions, caused him, he said, to feel stigmatized and have thoughts that there was something wrong with him.

“Something was defective of me and my experience,” Justice Liu explained, “this is how casual racism becomes part of our social environment.”

“So much of the change we need is not in the realm of law but in the realm of culture…it’s about what our leaders say…how we are portrayed in television….it’s what our parents and our teachers teach our kids.”

Regarding the law, Justice Liu stated that in regards to implicit bias, “the law has not yet caught up” and “people experience implicit bias in lots of different realms.”

The intent to discriminate can be hard to prove, and this needs to be known and work needs to be put towards that, Liu noted.

Five community leaders who work with the larger AAPI community were then introduced as the speakers for the first panel.

Peejay Ali, community advocate with the Asian Prisoner Support Group, spoke about the trauma he experienced as a Cambodian school boy when a white gunman entered his school and killed his Cambodian classmates.

“I was being spit on simply because I didn’t understand the culture [in America]” and he asked himself,  “Do I matter?

After getting caught in gang-related crimes, Peejay was housed at San Quentin where he came together with all racial communities to do program work.

“It [prison] taught me I can be accountable…and the person harmed someone because they’ve been harmed,” he stated.

People need that opportunity to heal from their trauma, he explained, and “investing in healing and rehabilitation…rather than punishment is the key, I think.”

In his opinion, the hate on social media “has created more trauma, has created more pain” and he wants “to imagine a world where we can all feel safe, our kids can feel safe, because I didn’t grow up in an environment where I felt safe.”

Assemblymember Ash Kalra was then introduced to speak on “the use of othering as a tool of division.”

Kalra nodded to Donald Trump as a key inciter of the AAPI hate that has increased over the past year, and due to this his office has pushed for a $2 million budget to help fight hate crimes.

This money will go to grants for nonprofits and other organizations that provide education, legal help, and mental health help to those who are in need, Kalra said.

“When that [police] is your only tool, it doesn’t solve any problem,” Kalra explained, and police “does not solve the underlying issue.”

He also spoke about current state legislation that works to eliminate racism and race-based hate crimes.

The CLEAR Act requires background checks for law enforcement applicants in order to see if they are a member in a hate group or have ever participated in hate group activities.

The Act allows the state to “root our extremists from law enforcement” and “create trust” within all communities.

“We are seeing responsible law enforcement agencies” come out and denounce the brutality that has been happening and also state that they do not want these officers on their teams any longer, Kalra said.

Anni Chung, the executive director of Self-Help for the Elderly, was then presented to talk about the elderly AAPI community and their current feelings and fears.

As of March 2021, the AAPI hate crimes have gone up to 66,000 incidents and these crimes “must stop,” she stated after sharing a victim story of an elderly woman who was punched in the face on Muni.

Although she agreed that media is “an important partner” in this movement, Chung encouraged everyone listening to not share the videos around to family and social media because it incites fear.

Chung also stated that “the Asian American stories never quite make it to mainstream media” and we must work harder to get positive stories of the AAPI members into the media.

“People only focus on the hurt or the weakness,” she said. “We could come up with a more holistic plan to see the root causes….to put our arms around it and stop them,” she added.

Executive Director of the Asian Women’s Shelter, Orchid Pusey, then spoke about the intersection of racism and misogyny.

The Women’s Shelter supports survivors of domestic and hate violence and human trafficking.

In 2018-2019 half of the domestic violence cases were against Asian Women in San Francisco.

“A lot of times the harassment…happens within the community rather than across,” Pusey explained, and this makes it harder for the community to come together.

“I want our communities to have safety,” she stated.

Pusey ended by stating her hopes for the future – Asian women walking places alone, going to job interviews, and “going outside for fresh air as trauma recovery.”

As the executive director at the Community Youth Center, Wan has a lot of experience working with Asian American youth who see the violence outside their doors every day.

Indeed, the youth have something to say about it, Wan maintained.

“About eight out of 10 AAPI youth have expressed anger” towards the violence and hate crimes happening, and over 60 percent of the youth expressed anxiety and emotional distress, Wan said.

Additionally, 80 percent of parents are worried that when school opens back up, their kids will get bullied based on their race.

At the Youth Center, Wan has implemented more workshops for safety information in order to “advocate and empower [the youth]….show them how to bring awareness” as “it’s only through education…that we can have a safe community for all.”

Wan ended by encouraging all listeners to advocate for anti-bullying curriculum in schools because “there’s a lot more work that needs to be done.”

The second panel, titled Rethinking Approaches to Investigating and Prosecuting Hate Crimes, featured four local and federal community members to spotlight the true nature of hate crimes and how we know when to prosecute them.

Assistant District Attorney of San Francisco, Xochitl Carrion, detailed exactly what a crime is and why they are not charged more frequently than other types of serious crimes.

According to California Penal Code Section 4.255 there are multiple “protected classes” such as disability, gender, nationality, race and ethnicity, religion, and sexual orientation that make hate crimes unconstitutional.

The DA’s office has the job of proving “that it [the crime] was motivated by your protected status…a substantial factor in the criminal conduct,” Carrion said.

The motivation factor is key, she explained.

Carrion noted that prosecutors have to prove that the act was motivated by prejudice, but how does one prove motive? They must look at the victim’s perception of the crime and other indicators such as words or gestures that occurred before or during the crime, she said.

On the other hand, hate speech is constitutionally protected under Supreme Court case People v. Synder (2011).

Naturally, there are many hurdles in deciding how and when to prosecute hate crimes as many times these crimes are committed with the influence of implicit bias, which is extremely hard to prove,” she said.

The second speaker, Michael German, detailed his experience as a former FBI Special Agent and current employee of Brennan Center for Justice in New York.

German explained that at the federal level, there are low charging rates for hate crimes and the FBI has a prioritization list in which hate crimes do not come first.

“These crimes are not getting the resources that they need,” he stated, “the federal government can do a much better job.”

The executive director of the SF Blue Ribbon Panel on Transparency, Accountability, and Fairness in Law Enforcement and member of the South Asian Americans Leading Together, Anand Subramanian, spoke about law enforcement culture.

During the Blue Ribbon Panel, Subramanian was “tasked with answering the critical question that the text messaging scandal raised: Was the racial and homophobic bias so clearly demonstrated by the offensive texts a reflection of institutionalized bias within the SFPD and, if so, to what extent?”

It was found that there “was institutionalized bias within the department [law enforcement in SF] in many ways,” he said, adding that officers had been engaging in “racist and homophobic text messages with each other,” he explained, and it is clear that “policing is inherently biased.”

The panel even worked to gather a list of over 100 recommendations for law enforcement, but the progress of implementing the recommendations has “been incredibly slow,” he said.

Subramanian questioned if officers can actually decide if a crime was motivated by hate due to the deep rooted racism and bias in the system.

The final speaker of the virtual summit was Angela Chan, policy director at Advancing Justice Asian Law Caucus who discussed the ways in which we can reconcile the call to reporting to police vs. building community resources.

Chan believes the solution to interpersonal violence is “community based solutions” to unequal opportunities to basic human rights such as housing.

Funneling more money into law enforcement agencies “has not gotten us anywhere,” she emphasized.

“It is important for us to not rely on only police,” but rather invest in mental health care, affordable housing, drug and alcohol treatment programs, restorative justice programs, accompaniment to elders, bystander training, ethnic studies, and improving conditions for low-wage workers such as access to COVID vaccines,” she said.

The summit came to a close as SF DA Chesa Boudin acknowledged the lives that have been lost and the hurt that has been caused over the past year to the AAPI community in San Francisco.

“Stand up, speak out, act up, and be allies,” he encouraged.

Alana Bleimann is a junior at the University of San Francisco majoring in Sociology with a minor in Criminal Justice Studies. She is from Raleigh, North Carolina.