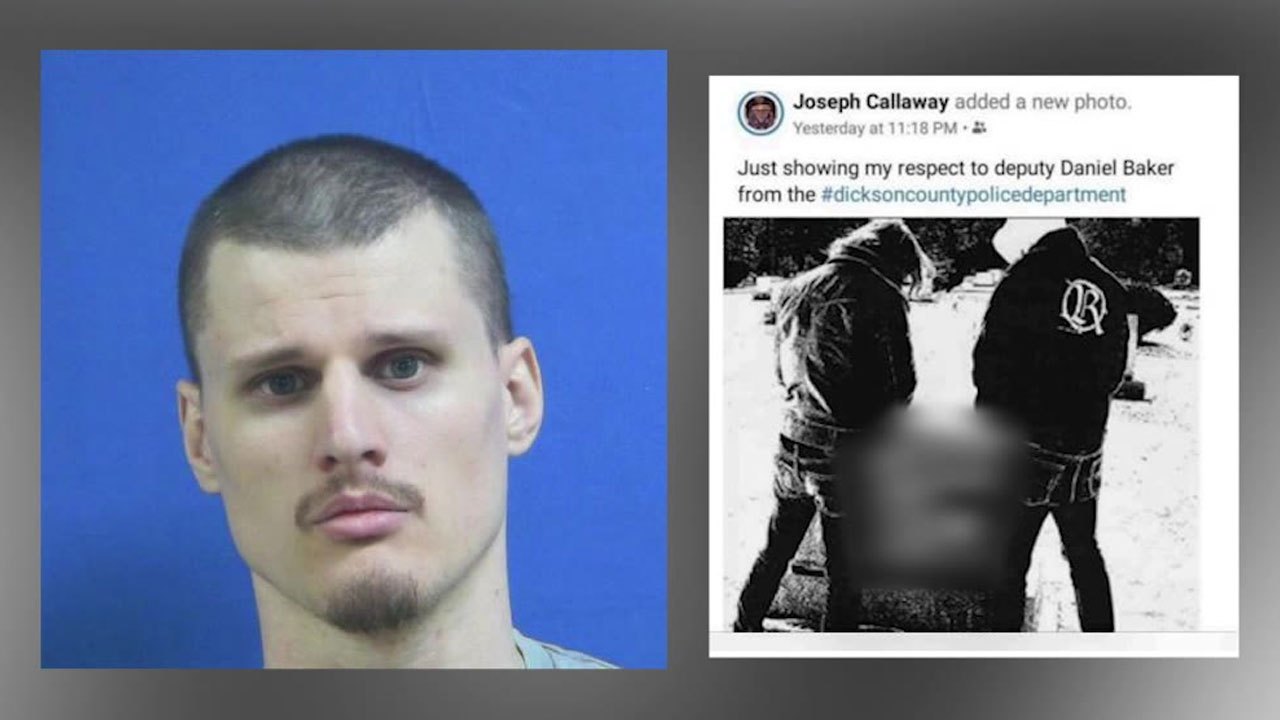 DICKSON, TN – The District Attorney General here and Director of the Tennessee Bureau of Investigation are among eight law enforcement officials, and the city of Dickson, sued by lawyers last week for a now homeless man who was hunted down, and then held in jail for two weeks because of a meme he posted critical of a deceased officer.

A judge later dismissed the charges, noting there was no victim.

Even though evidence offered in the initial lawsuit quoted defendants admitting they knew what they were doing was wrong, Joshua Garton, 29, was arrested for posting in January a photoshopped image of Deputy Daniel Baker’s grave site being desecrated—men allegedly urinating on the site.

“As a result of the Defendants’ unconstitutional and tortious misconduct, Garton, a 29-year-old disabled male who suffers from mental illness, spent nearly two weeks in jail for a non-existent crime and became homeless,” claimed the plaintiff in the pleading filed in U.S. District Court for the Middle District of Tennessee at Nashville.

Garton is seeking compensatory, consequential, incidental and punitive damages in an amount not less than $1 million for claims of malicious prosecution, false arrest, First Amendment retaliation, civil conspiracy/agency liability, the City of Dickson’s unconstitutional policies and practices and injunctive and declaratory relief against the City of Dickson and defendants Crouch and Rausch in their official capacities.

Daniel A. Horwitz from Horwitz Law called the defendants’ behavior, a disregard for taxpayer money and the First Amendment a consequence of their and their employee’s constitutional

“If they had any dignity of respect for the people that they are supposed to serve, District Attorney Ray Crouch, TBI Director David Rausch, and all of the agents who participated in this despicable and unconstitutional malicious prosecution would resign. Law enforcement officials should uphold the law, rather than violate it,” said Horwitz.

The lawsuit charges the photoshopped image was posted on Garton’s Facebook, and was seen by defendant Crouch, who decided to act on the image even though they knew it was fake and called for a local and state manhunt to arrest Garton for disrespecting the officer.

Even though Crouch was aware of the illegitimacy of the photo, and that it was protected by the First Amendment, the federal pleading provide information quoting Crouch saying, “He (Garton) has a right to post. That doesn’t mean there are no consequences.

“Even so, because Mr. Garton had disrespected law enforcement, the Defendants vowed that: ‘(that doesn’t mean there are no consequences).’ Accordingly, the Defendants arrested Mr. Garton, charged him with a crime, and held him in jail on a bogus charge for nearly two weeks while he awaited a hearing. In the interim, the Defendants also humiliated Mr. Garton through reputationally damaging press releases and other media that prominently featured Mr. Garton’s mugshot and the fact of his arrest,” read the suit.

Rausch, Director of the TBI, the state’s lead law enforcement agency, appeared to actively believe that prosecuting citizens regardless of freedom of speech is appropriate, at least for the family of the police officer that was mentioned in the post.

In a text from Rausch, “It appears that they and the lawyers forget that there are surviving family members that have rights as well.”

“At all times relevant to this action, Defendant Rausch had an obligation to comply with the Constitution and enforce the law, rather than participate in a conspiracy to violate it (and) believes that arresting citizens for offensive speech is not only appropriate, but that criticizing law enforcement for violating the First Amendment is akin to defending insurrection,” according to the pleading.

When the details of the case were released to the public, TBI was bombarded with calls from the public saying that they did not support what had happened.

The filing noted, “Upon receiving such criticism, one TBI dispatcher complained: ‘We did not sign up for this.’ In response to the legitimate public criticism that they were receiving, the Defendants did not release the Plaintiff or take steps to remedy their flagrantly unconstitutional conduct.

“Instead, to inhibit such criticism, the TBI began tracking the critical calls they were receiving, surveilling callers, and, in at least one instance, decided to “try[] to pin down who [the caller was] so we can ask the local police and maybe have them go out there and ask him to stop.”

The lawsuit notes that “During the Plaintiff’s preliminary hearing, Defendant Craig repeatedly admitted that the Plaintiff had not posted the meme at issue with an unlawful purpose, which was a threshold element of the harassment charge that he and the other Defendants had conspired to initiate and then did initiate against the Plaintiff.”

The judge in the case, as he announced harassment charges were dismissed in a February preliminary hearing, concluded “the Court cannot find that there’s probable cause to believe that the posting of this photograph constitutes a threat of harm to Lisa Baker, but is instead, a denigration of Sergeant Baker’s memory. Therefore respectfully, the Court dismisses this count.”

Share:
Tags:First AmendmentLaw Suitsocial media
Previous : Ice Cream and Insistence: A Case of Overcriminalization for Black Women in Oakland
Next : Guest Commentary: Biden Must Be Bolder on Immigration – the Lives of Millions Depend on It.