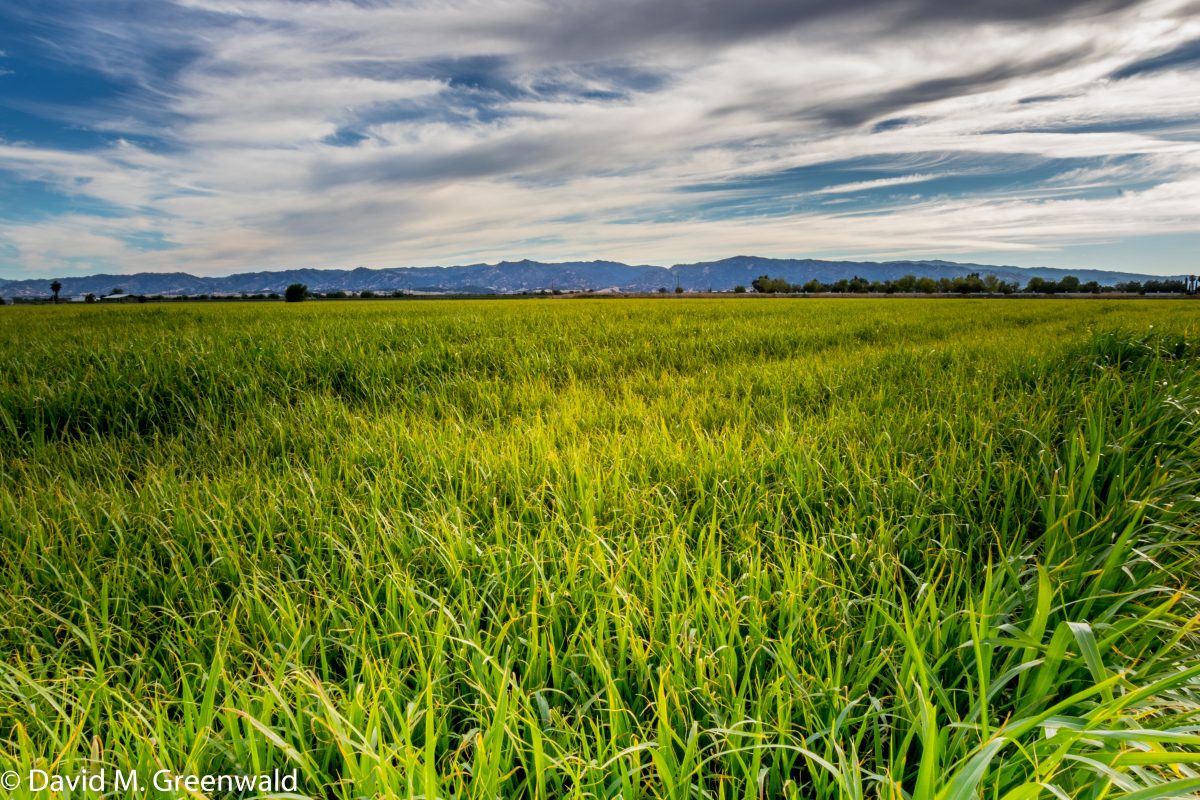 According to records provided by residents of Capay Valley opposed to the proliferation of cannabis farms in that rural and semi-rural area, there are 54 licensed pot farms in Yolo County with identified APN parcel numbers. Of these 54 farms, 27 (50%) are located in or near the unincorporated towns of Guinda, Rumsey, Capay, and Esparto in the geographically short and narrow Capay Valley. The remaining 27 farms are located in other widely dispersed unincorporated areas of Yolo County. Based on land area alone, this is obviously a hugely disproportionate concentration of cannabis farms in this generally less wealthy area of the County. 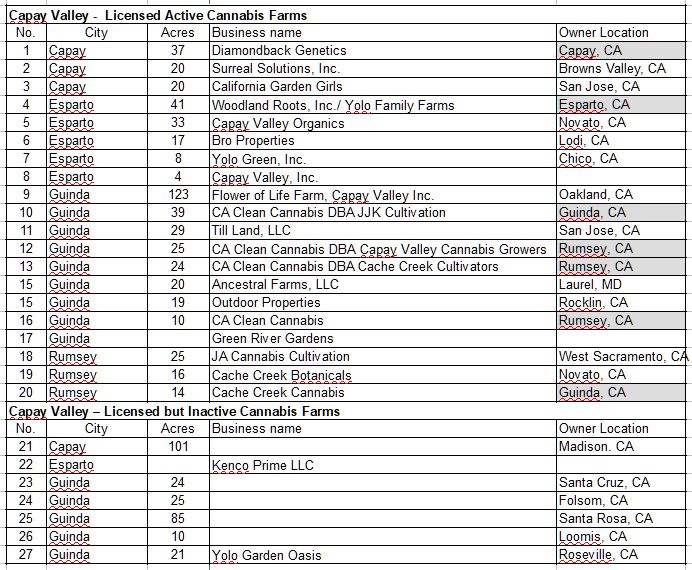 It is further noteworthy that of the 27 cannabis farms in the Capay Valley, only 7 (26%) have a person or business owner with an actual identified mailing address in the valley itself – everyone else is from somewhere else.. (Note: County records are incomplete or inaccurate so some property/business owner information was not released or otherwise unobtainable. As a result, not all information is currently available for all cannabis farms licensees)

In direct conflict with these facts, the cannabis farming industry’s main lobbyist, Richard Miller of the State Director of the American Alliance for Cannabis and Yolo County Farmers for Safe and Responsible Cannabis Regulations, recently stated in a published letter, “In fact, many long-term residents are trying to be a part of a new and exciting industry by developing better models and practices for the future rather than just ignoring cannabis like it doesn’t exist or worse, treating it like some kind of plague.”

He further goes on to paint a very rosy picture of the benefits of local cannabis farms, “Legal Cannabis supports the Yolo County community. When cannabis is purchased from our legally licensed businesses, local jobs are being supported and tax revenue is being generated, which in turn, gets reinvested in our community. By producing cannabis locally, we create a larger, more beneficial impact for all. Contributions also extend to local nonprofit organizations, fire departments, and charitable entities on top of those taxes that benefit local projects. The cannabis industry, in general, has always been empathetic, rooted in medical collectives, offering compassionate use and access for those in need.”

But, “Lots of good jobs, lots of taxes paying for police and fire departments and reinvested in our community, lots of money to be given to non-profits, minimal local impacts” sounds familiar because these are the standard promises carpetbaggers and developers make when they come into any new area looking for profitable business opportunities.

But the experiences of close neighbors of the cannabis farms tell quite a different story. According to a letter sent to the Yolo County Supervisors by long-time Capay Valley resident, Helen H. McCloskey of Rumsey Farms, “Most of us voted to legalize cannabis. Little did we know our County’s implementation would harm so many and benefit so few, creating a policy of social and economic injustice that creates great wealth for a few at the expense of the community. When anyone can grow cannabis, it’ll be farming. Growing cannabis isn’t ‘farming’; it’s a grant of special privilege, available only to those with access to wealth, and largely abused.”

This disparity in how the supposed benefits of concentrated cannabis farming in Capay Valley seemingly will accrue to outside business interests instead of local residents and communities seems reminiscent of the long-time proven practice of locating hydrocarbon extraction, waste processing, and other “dirty” industries in poorer cities and neighborhoods. In California, these commercial blighted areas include southeast San Francisco, west Oakland, south-central Los Angeles, and along the Hwy 99 corridor in major San Joaquin Valley cities including Bakersfield, Fresno, Stockton, and Sacramento.

In Capay Valley the presence and problems with the new cannabis farms is similar in that the generally non-resident businesses are granted exclusive rights to locate their problematic industries in poorer areas of the County all the while painting a rosy picture of good jobs for local residents that will fill up local restaurants and stores and provide tax revenues to fill the coffers of county government.

But the truth is a far more detrimental impact to local residents adjacent or nearby to these cannabis farms. These include the stench of acres of ripening cannabis near harvest time or running diesel generators 24/7 for processing or storage facilities all of which have been reported to County authorities in dozens of letters from local residents also alleging numerous other objectionable activities.

And these are problems associated with just the 27 small 1-acre maximum plot sizes on the farms. Local residents are right to worry about what will happen if the County opens the floodgates to many new and larger farms or allow greatly expanded use of existing farms. For instance, what if the County eventually allows a 10 acre or 20 acre cannabis plot at a single site compared to the current maximum of 1-acre. Or what will be the impact if the County eventually doubles or triples or more the number of cannabis farms in the County with even only modestly higher maximum plot size per farms?  Current residents know from experience with the small existing 1-acre plots that if will likely be far worse than even their current untenable situation

There are many other areas of unincorporated Yolo County that are not nearly as densely populated as the Capay Valley and where problems with cannabis cultivation can be more easily dispersed and efficiently and effectively monitored by law enforcement.  Our Supervisors should not allow any cannabis farming in close proximity to any comparatively densely populated areas in Yolo County. And they should certainly ban such cannabis cultivation when located in such a geographically constricted and confined area such as in Capay Valley with its narrow valley floor.

3 thoughts on “Guest Commentary: Capay Valley Is Being Overrun by a Disproportionate Share of Yolo County Cannabis Farms”