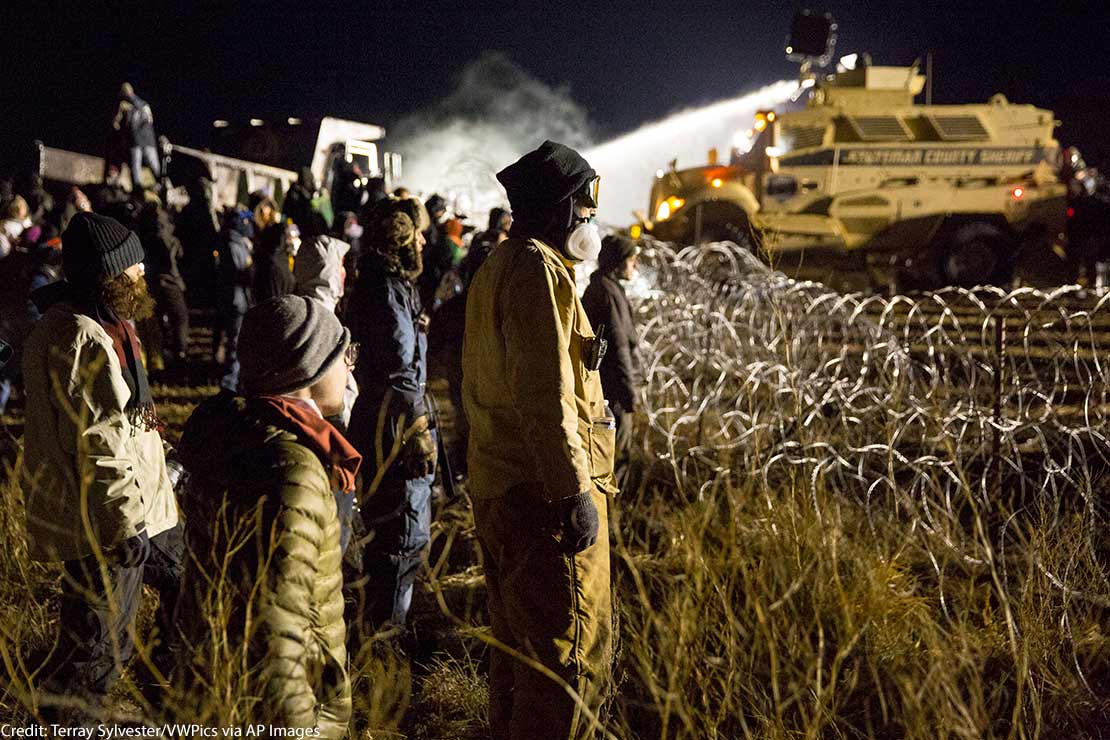 Our new report documents the critical need to repeal 1033, which allows the federal government to equip local police with military gear.

You’ve probably seen it by now, on B-roll if not in real life: Police and sheriff’s deputies spraying protesters with a water cannon mounted on a mine resistant vehicle. Combat vehicles rolling down American streets. Police — some with combat helmets and night vision goggles — touting military-grade rifles. These are America’s militarized police forces, brought to your community in no small part by billions of dollars in federal spending. No federal program is more emblematic of America’s police militarization problem than 1033, named for a section of law that allows the U.S. military to directly distribute weapons of war to police and sheriff’s departments.

Representative Nydia Velázquez will soon re-introduce legislation to repeal 1033. Our organizations have been on the front lines of the fight against militarized police, and ACLU researchers recently spent months analyzing the 1033 program. Our findings give rise to a straightforward recommendation: Congress should pass the Demilitarizing Local Law Enforcement Act of 2021 and President Joe Biden should sign it into law.

The 1033 program gives police and sheriff’s departments unique and unprecedented access to military gear. Since the program was created in 1996, the U.S. military has given roughly 10,000 law

enforcement agencies $7.4 billion worth of equipment including grenade launchers, batons, combat vehicles, and hundreds of thousands of rifles. Though police first employed these classes of weapons most in raids similar to the one that killed Breonna Taylor, more recently they have also used them against protesters across the country, including in Standing Rock, Ferguson, Kenosha, Austin, Philadelphia, and just last week, in Minneapolis. The frequency of state violence against protesters in the U.S. makes it easy to forget that, if our military used tear gas against protesters elsewhere, it would be a war crime.

The transfer of military equipment to state and local law enforcement is a legacy of America’s “forever wars” on drugs, crime, and terror. Congress first enabled the practice in order to facilitate “counter-drug activities” then expanded it under the guise of “counter-terrorism.” Racism and Islamophobia motivated the policymakers who inaugurated these failed “wars,” and the ill effects of America’s militarized police forces continue to be most pronounced in Black, Brown, and Indigenous communities.

Attempts at Reform Have Failed

Rep. Velázquez’s bill is not the first time that 1033 has faced serious scrutiny. After the highly militarized police response to people protesting the police killing of Michael Brown in 2014, President Barack Obama signed Executive Order 13688 in order to curb the transfer of military equipment to state and local police and to establish transparency and oversight of the 1033 program. Obama’s executive order placed new controls on classes of military equipment such as combat vehicles; entirely banned a few items, such as tracked armored personnel carriers, bayonets, and firearms over .50 calibre; and required that data about each piece of military equipment given to police and sheriff’s departments be made public.

The reforms may have looked good on paper, but our research shows what they actually accomplished on the ground. The short answer? Very little.

The number of militarized vehicles in circulation continued to increase despite the reforms. The new oversight mechanisms to constrain the flow of dangerous gear proved to be toothless: Law enforcement agencies satisfied requirements that military gear serve a necessary purpose with repeated and vague justifications such as “FOR HIGH RISK OPERATIONS,” “HIGH RISK WARRANTS,” and “COUNTER DRUG.”

Provisions of the reforms intending to encourage law enforcement agencies to better protect civil rights and civil liberties similarly accomplished little. Even the most highly publicized moments of police violence seem to have had no effect on a law enforcement agency’s receipt of military equipment. For example, Baton Rouge police received a helicopter mere months after the 2016 police killing of Alton Sterling, and NYPD received two mine-resistant vehicles (MRAPs) just a couple of years after the 2014 police killings of Akai Gurley and Eric Garner.

The number of assault rifles sent to state and local police departments did fall while the reforms were in effect, but this decrease seems to be more a result of fewer troops returning from Iraq and Afghanistan than of Obama’s reforms. Indeed, after Donald Trump rescinded the reforms in 2017, the number of rifles transferred remained flat.

The failure of reforms is further demonstrated by the fact that, at the end of the reform period, state and local law enforcement agencies possessed 78,100 assault rifles and 1,400 militarized vehicles — all transferred through 1033.

Let’s Divest from Policing and Invest in Communities

Do you want your local K-12 school — or your local university or local police force — to have assault rifles, an MRAP, combat vehicles, or other weapons of war? Are there other resources your community could make better use of? Among the many problems of police spending programs like 1033 that they take these decisions away from us.

America’s problems with police militarization are caused not only by the use of military equipment and military tactics, but also by ideologies that envision police as an occupying force, especially in areas where Black, Brown, and Indigenous people live. Repealing 1033 is a necessary first step in demilitarizing local law enforcement agencies, but police more commonly inflict violence with guns, tasers, batons, and even bicycles than with sniper rifles and MRAPs. As part of a broader initiative to divest from policing and invest in communities, Congress and the President should work to make the Demilitarizing Local Law Enforcement Act of 2021 law.

You can read our complete analysis of 1033 and see all our recommendations here.

One thought on “Guest Commentary: It’s Past Time to End the Federal Militarization of Police”