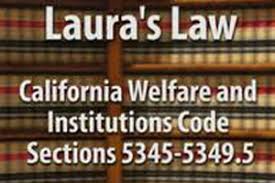 Sacramento County Board of Supervisors are scheduled to vote on whether to opt-in to Laura’s Law, an initiative that was signed into California state law in 2002 that provides community-based, assisted outpatient treatment (AOT) to a small population of individuals who meet strict legal criteria and who – as a result of their mental illness – are unable to voluntarily access community mental health services. Laura’s Law was adopted by the state Legislature after a man with mental illness fatally shot Laura Wilcox, a 19-year-old volunteer at a Nevada County mental health clinic. The legislation allows each county in the state to decide whether to adopt the provision.

Assisted outpatient treatment (AOT) laws sound good in theory, right? Sustained and intensive court-ordered treatment in the community for individuals with severe untreated mental illness and a history of violence or repeated hospitalization that is used until a person is well enough to maintain their own treatment regimen. Due to strict legal criteria, AOT participants typically represent far less than .05% of a state’s population but are described as people most at risk to be in a hospital, ER, on the streets, or behind bars. These laws purport to reduce hospitalization, arrest and incarceration, homelessness and violent acts associated with mental illness. But don’t get it twisted, Laura’s Law is NOT a tool for assisting individuals most at risk for the negative consequences of not receiving treatment. It’s another way to add to the criminalization and dehumanization of mental illness – just because it’s in the community doesn’t mean it’s not criminalizing. It’s not surprising that the strongest supporters of AOT laws are the International Association of Chiefs of Police, National Sheriffs’ Association, and the Department of Justice.

We need to shift how we view those experiencing mental illness. Instead of viewing these individuals as dangerous sources of disorder that need to be controlled through aggressive and intensive policing, including court-mandated treatment, let’s look at them as individuals experiencing a significant deterioration in their mental health functioning due to lack of adequate treatment and

services to support their stable functioning.

AOT will adversely affect Black and Brown community members, as there is evidence in the research literature that racial bias plays a role in the overdiagnosis of disorders like schizophrenia in Black people. There are also exponentially higher rates of Black individuals with severe mental illness in the criminal justice system. Back in November, this Board declared racism a public health crisis in Sacramento County and as such pledged to promote racial equity while shaping policies, appropriating resources, implementing programs, and issuing directives. Opting-in to the Assisted Outpatient Treatment law will be directly going against this declaration.

The outcome data on involuntary outpatient treatment shows that forced treatment is often counterproductive – renewing trauma and steering people away from the mental health system altogether. A lack of stable housing and income exacerbates mental health problems, makes treatment more difficult, and contributes to the public display of disability-related behaviors – all of which make it more likely that law enforcement will be called and/or a person experiencing a mental health crisis finds themselves in a hospital, ER, on the streets, or behind bars. Reducing social services and replacing them with punitive social control mechanisms works less well and is more expensive. The cost of providing community housing for people and providing them with mental health services is actually lower than cycling them through emergency rooms, homeless shelters, and jails. Instead of just funneling ever-increasing amounts of money into carceral structures that purport to provide enhanced mental health services, we should be providing easy access to varied, culturally-appropriate community-based services as needed. Prioritize community-based participatory research and intervention by partnering with key stakeholders in the community and listen to them. Find ways to incorporate their thoughts, suggestions, and interpretations into interventions and screenings. It takes years, not months, to build the trust, culturally competent interventions, and tools needed to better understand severe mental illness in Black populations and to ensure better diagnosis and treatment.

We need more proactive, pre-emptive, and collaborative interventions before an individual’s mental health issues have escalated to critical levels where the justice system steps in and makes treatment decisions for people. We need easy access to varied, culturally appropriate community-based services. Civilian outreach teams and safe drop-in spaces can also help to provide stability and support to those living with mental illness.

Supervisor Frost was quoted this April in Capitol Weekly stating: “There are people in our world who cannot take care of themselves, and they need help.” I actually agree with this point. However, I strongly disagree with, and take offense to, her follow-up comment: “You can’t exercise your civil rights if you’re seriously mentally ill or in a drug-induced psychosis.” This belief that individuals living with a severe mental illness do not deserve or cannot operate with the same liberties as those without a mental illness contributes to the stigma and dehumanizing of those living with mental illness.

If we look at the statistics regarding violence, the common denominator is access to guns, not a history of mental illness. People living with a mental illness and experiencing a crisis are more likely to be a danger to themselves than they are to others. Sure, there have been tragic outcomes like the one this law is named after. But what about those members of our community who lived with mental illness & were murdered by Sacramento Sheriff deputies during a mental health crisis? There are far more of these examples than there are of people with untreated severe mental illness being a realistic threat of danger to others. The few incidences a year perpetrated by people with mental health conditions tend to receive headline coverage, perhaps distorting our perceptions.

Criminalizing the mentally ill is a tragic result of a county budget system that has prioritized general funds to favor the sheriff’s department. For treatment to be effective, a person’s basic needs must first be met: food, water, warmth, rest, security, and safety. The outcome data on involuntary outpatient treatment show forced treatment is often counterproductive – renewing trauma and steering people away from the mental health system altogether. Scarce public dollars are better spent expanding voluntary treatment programs that provide the surest path to recovery. It behooves Sacramento County to prioritize funding to support our most vulnerable community members with the ability to meet their basic needs in order to reduce the stress that is inherent in triggering and exacerbating existing mental health issues.

Before instituting a program that will strip away people’s civil rights for experiencing mental illness, let’s instead continue our focus on building an Alternative to Law Enforcement Response Program for Mental Health Crises and Quality of Life calls – a program that is community-led and life-affirming, non-punitive, and humanizing.

Let your voice be heard: submit public comment regarding this issue to boardclerk@saccounty.net; make sure to identify your comment as pertaining to the Board’s 5/18/21 meeting, agenda item #50. You can also call in to give live verbal comment during the meeting by calling (916) 875-2500 and follow the prompts to be placed in queue for item #50.

Dr. Corrine is a licensed clinical psychologist and a licensed marriage & family therapist. She has over 20 years of experience providing mental health services in a variety of settings (i.e., school, community mental health centers, group home, intensive outpatient treatment program). Social justice has always been a major interest and her passion for activism was ignited after the killing of George Floyd. Since then, she has volunteered with local racial justice organizations to foster awareness of social injustices and to promote community solidarity.